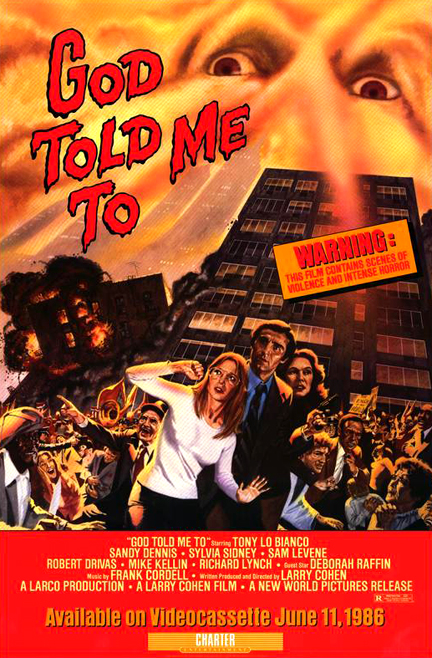 If there were an award for “Best Director Who Can Make Entertaining Movies Out of Ridiculous Premises”, one of the top contenders would be Larry Cohen. If you re a fan of B-movies, you’re probably familiar with Cohen’s work, but if you’ve never seen anything he’s done, I’ll provide a brief summary of some of his most well-known films. His biggest box office hit was It’s Alive, the story of baby who turns out to be a vicious mutant monster that goes around killing people. Q: The Winged Serpent delivered just what its title promised, featuring a winged Aztec serpent nested on the top of the Chrysler Building which flew around picking off victims in New York City. And then there was The Stuff, a horror based around the idea of the public becoming addicted to a mysterious ice cream-like substance that caused them to mutate into zombie-like creatures. In recent years, some of Cohen’s scripts have been made into major Hollywood films, and once again, their premises that probably shouldn’t have worked. Phone Booth was a story based entirely around a guy being held hostage in a phone booth by a sniper, and the storyline for Cellular involved a guy attempting to track down a kidnapped woman after picking up her cries for help on his cell phone. These films demonstrated Larry Cohen’s unique ingenuity as a storyteller. He is definitely not the most polished filmmaker in the world as his films have low budgets and cheap production values and are often sloppily assembled. However, even when his films don’t altogether work, they are always entertaining and never boring. It’s doubtful that anything in his filmography can match the epic weirdness of God Told Me To. This is the very definition of a movie that’s all over the map and seems to jump back and forth between genres several times, but even though it doesn’t make an ounce of sense, it still provides plenty of entertainment.

God Told Me To opens with a sniper picking off random people in the streets of New York. The crime seems very bizarre because the assailant has no history of violence of criminal activity and for a guy without any sniper training, his shots are remarkably accurate. A cop named Peter Nicholas (Tony Lo Bianco) climbs onto the roof to speak with the sniper and after asking why he did this, the guy responds with “God told me to” before leaping to his death. It’s not too long before similar incidents start popping up around New York City. Seemingly normal, law-abiding citizens decide to go on random killing sprees and their explanation is always the same: “God told me to”. In one of the film’s most chilling scenes, a formerly atheist father is questioned after murdering his entire family and seems completely at peace with himself because he believes he was going God’s work. A devout but closet Catholic, Peter takes a special interest in the case and becomes obsessed with trying to figure out what’s going on. While conducting his investigation, he discovers that a mysterious Christ-like figure (Richard Lynch) was seen with many of the assailants before they committed their crimes. But if you think that the movie’s big twist is that this figure really is God and has been telling people to commit mass murder, you’ve got another thing coming. Peter’s investigation eventually leads to him uncovering such off-the-wall discoveries as a strange cult, and a couple of virginal women who have managed to become pregnant and give birth after a supposed alien abduction! Peter then begins to make the shocking realization that he has a personal connection to all these wacky events and may have otherworldly powers of his own. One should have gotten the hint about how absurd this film would become during the early scene where a cop who goes on a God-inspired shooting spree. The cop is played by none other than Andy Kaufman!

Trust me, I summarized this plot as best I could. Like I said earlier, God Told Me To is all over the map. Larry Cohen starts the film off with a very intriguing hook, and then uses it to jump back and forth between being a police procedural, a religious thriller, and a sci-fi story involving aliens. I can honestly say you’ll never find another film that manages to be a cross between Rosemary’s Baby, The Omen, The X-Files and Unbreakable. God Told Me To is definitely unpredictable and the viewer is constantly left wondering what is going to happen next. Just when you think the film is going in one direction, it suddenly goes off in another, and the transitions are often quite abrupt. The editing and pacing of this film are pretty clumsy, but that almost adds to its low-budget, grindhouse feel. Surprisingly, most of this absurd material is played with dead seriousness, and Cohen has assembled a cast who somehow manage to pull it off. Tony Lo Bianco is a long-time character actor who is probably best known for his role as Sal Boca in The French Connection, and if you’ll excuse the pun , he’s practically a miracle worker in the role of Peter Nicholas. Peter is an incredibly deep and complex character for a horror film, a man who is constantly questioning his faith and eventually discovers that there’s a good reason for him to be uncertain about his place in the world. Of course, it can’t be an easy task for an actor to give a serious portrayal of a character who may or may not be alien or a relative of Jesus Christ, but Lo Bianco is up to the task. He delivers a very strong performance and his genuine sincerity is what keeps the viewer invested in this indescribable plot.

Special mention should also be made of the strong performance of character actress Sylvia Sidney (best known to modern audiences for her role of Juno in Beetlejuice), who somehow manages to evoke genuine pathos when talking about being impregnated by an alien. And even though it’s never really clear just what the hell his character is supposed to be, the late Richard Lynch makes a very memorable and creepy villain. I’m sure religious viewers will be none-too-pleased with the idea that the second coming of Christ would look like Richard Lynch.

Predictably, some people were quick to protest a movie named God Told Me To, so it was released in some places under the more generic title, Demon.  The film was funded by Roger Corman’s production company, New World Pictures, and, of course, when Cohen wound up delivering a movie which was WAY more ambitious than Corman was used to, the company had no idea how to market it. Indeed, I would have loved to have seen Roger Corman’s face the first time he watched God Told Me To because, for a low-budget horror film, it contains enough ideas for ten movies. In fact, if you cared about the film enough, God Told Me To could easily inspire just as many conversations and debates as Inception, as beneath its B-movie plot, you’ll actually find a very intelligent commentary on religious hysteria. Of course, the film’s ambition is both its greatest strength and weakness. It’s obvious that Cohen wanted to do too much here, but did not have the budget or resources to pull it off. However, as I stated earlier, the best thing you can always say about a Larry Cohen film is that they are always entertaining and never boring, and those traits certainly apply to God Told Me To. It truly is unlike anything you’ve ever seen before, and is definitely worth a view for curiosity seekers. And, come on, where else are you going to find a film where the plot hinges on whether or not a man is going to sexually penetrate a vagina on another man’s rib cage?!