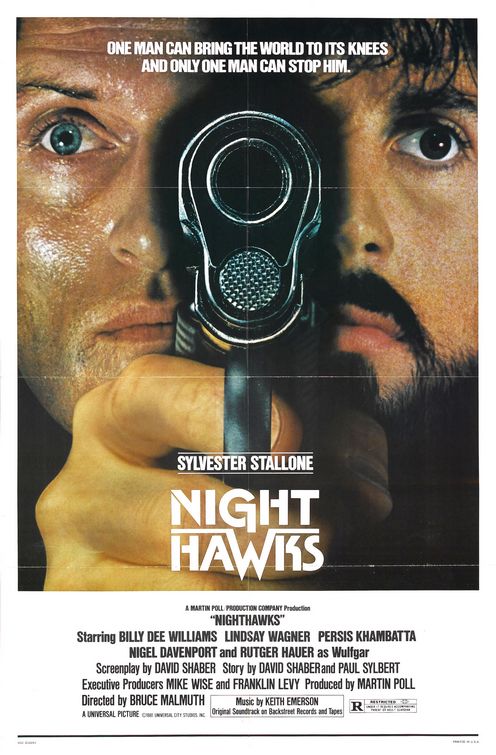 To commemorate the much-anticipated opening of The Expendables on Friday, it’s only appropriate that the newest edition of this column focus on an underrated film from Sylvester Stallone. I was initially leaning towards writing about one of my all-time guilty pleasures, Tango & Cash, but then I figured I should focus my energies on a Stallone film that most people have probably never even heard of: Nighthawks. This 1981 gem is definitely one of Stallone’s best films, and may be overlooked because it just happened to be sandwiched in between Rocky II and First Blood. It’s easy to imagine how this film wound up being lost in the shuffle while Stallone was finding massive success with two of the most iconic characters in cinema history. However, it should not be forgotten that Nighthawks is a very solid and exciting no-frills action-thriller that also gets major points for bringing Rutger Hauer over to North America.

Nighthawks instantly grabs the viewer’s attention in the opening scene by presenting the rare sight of Sylvester Stallone in drag! He plays a cop named Deke DaSilva, who works on the N.Y.P.D. decoy squad, which entails him having to dress up as a very ugly woman in order to lure muggers into trying to steal his purse. Billy Dee Williams, in his first post-Lando Calrissian role, plays DaSilva’s partner, Matthew Fox. They are soon pulled off decoy squad in order to assist Interpol in their efforts to capture a dangerous European terrorist named Wulfgar (Rutger Hauer), who has made his way to New York and is ready to wreak havoc. The storyline is pretty simple and I wouldn’t say Nighthawks is a masterpiece of plot and characterization. The term “half-assed” doesn’t even begin to describe how the movie develops the relationship between DaSilva and his ex-wife (Lindsay Wagner), and it’s obvious that the only reason she’s in the movie in the first place is so that Wulfgar can eventually threaten her life. The film’s first half also has a few pacing issues, as there are an abundance of briefing scenes which start to drag a bit after awhile, and it’s easy to identify with DaSilva when he whines: “We can’t catch him if we’re sitting in here”. But once DaSilva and Fox finally hit the streets and start going after Wulfgar, the movie really kicks into high gear.

The film’s director is Bruce Malmuth, who doesn’t have a lot of credits to his name and is probably best known for playing the karate tournament announcer in The Karate Kid. However, he shows himself to be really skilled at staging suspenseful and exciting action sequences, delivering some stellar setpieces that include a long chase through the subway system and the hijacking of a cable car. Once the film gets going, it never lets up and is a very entertaining ride for Stallone fans and action buffs in general. Of course, a lot of the film’s success is due to having a very strong villain, and Wulfgar immediately becomes a bad guy you’ll love to hate during his introductory scene, where he flirts with a department store sales girl while casually slipping a bomb under the counter. After being established as a major star in Europe for nearly a decade, Rutger Hauer was finally lured over to North America to play the role of Wulfgar and he does a marvelous job, which ensured that he would be playing Hollywood bad guys for years to come. When a villain is this strong, not much character development is required for the good guy in order to root for him, but Stallone still gives one of his better performances as DaSilva. It’s definitely one of the more restrained roles of his career, but he does get the chance to let loose with one classic profanity-filled tirade.

Overall, Nighthawks is a very solid and underrated effort from Mr. Stallone that should probably be more remembered today, but given that it was a transitional piece between Rocky and Rambo, it’s easy to see why it’s somewhat forgotten. While it’s easy to recommend it as a better-than-average action-thriller, what really elevates the film for me is its ending. I may have complained about how useless and underdeveloped the character of DaSilva’s ex-wife was, but when all is said and done, I’m actually very glad she’s in the movie because her presence allows for one hell of a suspenseful and well-crafted final scene. *SPOILERS* If you’ve never seen Nighthawks and are planning to watch it someday, don’t view the following clip, but I felt the need to post it because it’s one of my favourite action movie endings ever!