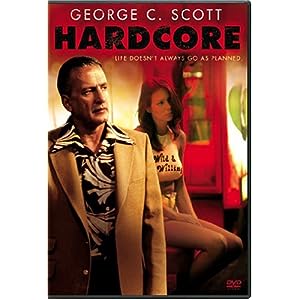 I had thought about doing a crossover to “The Velvet Rope” portion of this blog and writing an “Underrated Gems” column that featured a film involving pornography. I had a few excellent documentaries about the porn industry in mind until I read a discussion the other day about Montana Fishburne’s decision to start a porn career, and someone cracked a joke about how Laurence Fishburne should star in a remake of Hardcore. When I realized that a lot of people wouldn’t even get that joke, a lightbulb went on over my head and I decided that this underrated 1979 George C. Scott/Paul Schrader collaboration deserved its place in the sun. Paul Schrader is probably most renowned for writing the screenplay for Taxi Driver and has been the writer behind a lot of classic Martin Scorsese films, but he’s also had a pretty prolific career as a director and delivered such films as Blue Collar, American Gigolo, Affliction and Auto Focus. I consider a great deal of his filmography to be underrated, but my personal favourite of his movies is probably Hardcore, which after Boogie Nights, may be the best film ever made about the sex industry. It may not be too shocking by today’s standards, but considering how taboo a lot of this subject matter must have seemed in 1979, it’s pretty astonishing that it was distributed by a major studio like Columbia Pictures.

Hardcore contains a lot of the same themes as Taxi Driver and delivers a pretty interesting parallel to that film. Remember Jodie Foster’s 12-year old prostitute character, Iris, and imagine a movie being told from the point-of-view of her father. George C. Scott delivers an outstanding performance as Jake Van Dorn, a simple middle-class man from Grand Rapids, Michigan, who also happens to be a devoutly religious Calvinist, which is one of the strictest denominations of Christianity. The opening scenes of this film paint an accurate picture of what Paul Schrader’s childhood was like since he was raised in a very strict Calvinist household, and I have no doubt he was probably disowned by a lot of family members for making a movie that tied their religion into the world of pornography. Jake is a single father and when his teenage daughter, Kristen, goes on a trip with her church group to a Youth Calvinist Convention in California, she suddenly goes missing. After getting little help from the police, Jake turns to a sleazy private investigator (Peter Boyle), who eventually finds a cheap 8 mm porno film that features Kristen engaging in some hardcore sexual activity. This scene, where Jake gives an emotionally devastated reaction to seeing his daughter in a porno, is probably the most powerful one in the movie and is brilliantly acted by George C. Scott. For obvious reasons, the uncut version of this scene is not available on Youtube, but the footage of Scott watching the film and screaming “TURN IT OFF!” seems like it’s gaining some popularity as Internet meme. In this clip, it’s mixed with some footage of him watching Corky Romano.

Anyway, Jake immediately sets out on a personal vendetta to track down the makers of the porno and find Kristen, which takes him on a dark journey into the seedy underbelly of Los Angeles. For Jake, the sleazy world of pornography, sex shops, peep shows and whorehouses is quite a jarring change from his wholesome world in Grand Rapids. Quite frankly, a look into this world was probably jarring for a lot of viewers when this film originally came out. This was only a couple years removed from when pornography had achieved mainstream popularity, so an in-depth look into the sex industry was not something that was commonly seen in a Hollywood film around this time. It’s obvious that the Nicolas Cage/Joel Schumacher collaboration, 8MM, was heavily influenced by this film (especially since Hardcore eventually delves into the world of snuff films) but by the time 8MM came out twenty years later, this type of material barely raised an eyebrow. This story works so well because it’s told from the point-of-view of someone who is a complete outsider. Even though Jake is a deeply religious man with fundamentalist values, he is not portrayed as a fire-and-brimstone fanatic who’s always quoting Bible verses and telling everyone he encounters that they’re going to Hell. He just simply does not understand society’s fascination with sex and his uneasiness with his new surroundings are displayed in this awkwardly uncomfortable scene where he sets foot inside a sex shop for the first time.

While Jake Van Dorn does seem like a decent man who genuinely loves his daughter, the film does keep some things about him shrouded in mystery. Not much is really known about Jake’s relationship with Kristen (and his relationship with her mother) before she disappeared, so it’s unclear at first whether she was kidnapped or willingly ran away. The mystery of Kristen’s home life parallels the mystery of Iris’ home life before she ran off to become a prostitute in Taxi Driver. Likewise, even though Jake treats Niki very well, it’s easy to sense an underlying disgust he has for her over her lifestyle choice and one is left wondering if he’ll want anything to do with her once he finds his daughter. The ending of Hardcore has always sparked mixed feelings with viewers and it’s no secret that Schrader wanted to end the film much differently until the studio forced him to make a change. While the ending may seem somewhat abrupt and unbelievable at first, there are some very interesting ambiguities about it and I certainly would have been very eager to see a follow-up story with these characters. In spite of a few questionable choices, Hardcore is still a terrific film overall, with great performances, very interesting characters, intelligent writing, and a stark and authentic portrayal of a very seamy world. It’s one of the many first-rate efforts in Paul Schrader’s filmography that has never gotten the appreciation it deserves. Some may consider Hardcore to be dated, but I find it to a very fascinating look at what the world was like before people had the Internet to fulfill their sexual gratification.