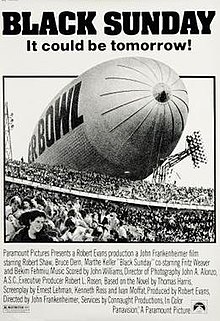 Since the NFL season starts this week, I thought it appropriate that my next column of “Robin’s Underrated Gems” be a football-related movie. And since I’m not a football fan at all, I figured I’d select the movie about terrorists trying to blow up the Super Bowl with a Goodyear blimp! The film in question is Black Sunday, which was originally based on a best-selling novel by Thomas Harris. This was the novel that put Harris on the map before he went on to write Red Dragon and The Silence of the Lambs and is the only non-Hannibal Lecter story he has written to date. The story for Black Sunday is particularly interesting in that it probably seemed absurd to a lot people back in the seventies, but in the wake of 9/11, it doesn’t seem all that far-fetched any more. In this film, you get to witness massive security precautions being put in place at the Super Bowl in anticipation of a terrorist attack and, 25 years later, these scenes would become a reality when the Department of Homeland Security would officially declare the Super Bowl to be a National Special Security Event. However, even though Black Sunday has an eerie prescience about it when viewed today, it was intended as an escapist thriller first and foremost, and it’s a pretty damn exciting one.

The terrorists who are the focal point of this story are the Palestinian Black September group, who were responsible for the infamous terror attack at the 1972 Munich Olympics. As the story opens, an Israeli Special Forces agent named Kabakov (Robert Shaw) leads a commando assault on a Black September hideout and kills nearly everyone inside. Kabakov encounters a woman named Dahlia (Marthe Keller) in the shower and, thinking she’s just a common hooker, decides to let her live, but comes to regret that decision when he finds a recording where she announces her plans to launch a massive terrorist attack on U.S. soil within the next several weeks. It is soon revealed that Dahlia has aligned herself with a former Air Force pilot named Michael Lander (Bruce Dern), who was held as a P.O.W. in Vietnam for several years. Lander pretty much lost everything once he returned to the U.S. after his imprisonment and is so disillusioned with his country that he’s willing to participate in a suicide mission that will claim the lives of nearly 100,000 Americans. Lander’s current profession is as a Goodyear pilot who often flies the blimp to get aerial shots for the television coverage of NFL games. It’s gradually revealed that his master plan will be to fly the blimp over the Super Bowl and set off a bomb that fires off thousands of flechette projectile darts, which will kill everyone in the stadium, including the President of the United States. Of course, Kabakov winds up coming over to America to align himself with the F.B.I. and it’s up to him to try and stop the terrorist attack before it happens.

Like I said, this story idea may have seemed ridiculous at the time, but I’m sure the idea of terrorists flying a jet into the World Trade Center also seemed pretty ridiculous as well. The two lead actors are just perfect in their roles. Robert Shaw is terrific as the no-nonsense Kabakov, whose utter seriousness adds a lot of humour to the film. Kabakov is so devoted to his job that he clearly has no interest in American customs and pop culture and the film’s biggest laugh is when he finds a Super Bowl program in a terrorist’s apartment and asks: “What exactly is this Super Bowl?”. When he casually asks his American superiors to cancel the Super Bowl and they act like he’s out of his mind for suggesting it, Kabakov’s bewildered reactions are priceless. Sadly, this would be one of Shaw’s last roles since he would pass away due to a heart attack only a year later. Bruce Dern is at his unhinged best in the role of Lander and even though he is planning to commit a very heinous act, Dern successfully turns Lander into a three-dimensional character. His standout scene is an angry, teary-eyed monologue about how much America took away from him by shipping him to Vietnam to become a P.O.W. and Dern delivers it so well that it’s impossible not to feel sympathy for the guy. Dern has said that he even though he is proud of his work in Black Sunday, he regrets having appeared in it since he feels it may have given terrorists some dangerous ideas.

The film was directed by John Frankenheimer, who was one of the top directors in Hollywood for a few decades before he capped off his career with some unfortunate clunkers like The Island of Dr. Moreau and Reindeer Games. However, he was definitely in top form for Black Sunday. The build-up he delivers for the Super Bowl is a long, deliberate one and it takes over 90 minutes to get there, but it’s well worth the wait. Many of the football scenes were actually filmed at the 1976 Super Bowl, lending the production a convincing air of realism and authenticity, and the movie does a splendid job at building up tension for the eventual attack. It all leads to a tremendously exciting climax where Kabakov is lowered from a helicopter on a cargo hook and has to single-handedly prevent the Goodyear blimp from crashing into the stadium. I’ve said this same point many times when I’ve covered older films in this column, but it bears repeating that this sequence would likely be done entirely with CGI today, but it would lack the excitement and immediacy seen here. That’s not to say the whole sequence is perfect since due to time and budgetary reasons, the film winds up concluding with one of the lamest climactic explosions ever seen in a big Hollywood movie. But all in all, that’s a very minor quibble since Black Sunday is still a very effective thriller that is pretty underrated today, though it is often referenced by conspiracy theorists who like to say “they warned us”. However, it is undeniably a very well-crafted and intelligent gem that has somehow managed to grow more timely as the years have gone on.