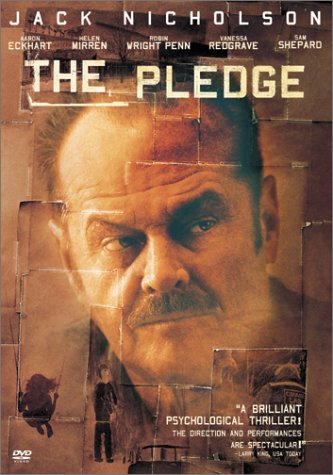 Sean Penn always used to say that he wished he could completely retire from acting in order to become a full-time director. Truth to be told, the films that Sean Penn has directed thus far are often so daring and uninterested in following a conventional Hollywood formula that has to wonder if a filmmaker who didn’t have his clout could even have gotten them made. Thus far, he has directed four films, which are The Indian Runner, The Crossing Guard, The Pledge and Into the Wild. None of them have been big Hollywood moneymakers and some of them have done a more successful job at telling a story than others, but all of them have been interested in characters who have unhealthy obsessions and the films are not afraid to take big risks. Into the Wild is the most renowned of his works, but I personally believe that The Pledge is a far superior film and one of the most underrated films of the past decade. This is a movie that may seem like a pretty routine police thriller on the surface, but turns out to be one hell of an effective character study that takes its story into genuinely unexpected directions.

The Pledge opens with one of the most cliched story arcs imaginable: the cop who gets involved in one last big case just before he is due to retire. However, the film does have a very unique origin since it is based on a 1958 Swiss novel by Friedrich Durrenmatt, which was written with the express purpose of subverting traditional detective fiction. This adaptation seeks to do the very same thing. On the night of his retirement, Jerry Black (Jack Nicholson) decides to tag along with his fellow cops to a crime scene where a young girl has been brutally murdered. Jerry is given the task of breaking the horrible news to the girl’s parents and the mother makes Jerry swear to a pledge that he will find the killer. Soon after, a mentally retarded Indian (Benicio Del Toro) is brought in as a suspect and a confession to the murder is coerced out of him. He winds up stealing a cop’s gun and committing suicide and everyone assumes the case is closed. However, Jerry is left with a nagging feeling that the Indian wasn’t actually the killer and the pledge he had sworn to begins to obsess him. He cannot settle comfortably into retirement and decides to conduct his own investigation in order to find the real killer.

Jerry uncovers evidence that the victim was seen hanging around with a large man she nicknamed “the wizard”, who may in fact be the real killer. He tries to present this information to his former police colleagues, but they are just convinced that he’s a bored retiree who needs to get a life. When Jerry discovers that other young girls have been murdered or gone missing around the same area as the victim, he actually goes so far as to buy a gas station there in the vicinity, so that he can live there permanently. He soon gets involved with a local divorcee named Lori (Robin Wright Penn) who has an eight-year old daughter named Chrissy. Jerry builds up a great relationship with them, but it’s left very ambigious whether he genuinely cares about them or just wants to use Chrissy as potential bait to catch “the wizard”. While the murder mystery in The Pledge is an interesting one, the film’s main purpose is to showcase a character whose dark obsessions are slowly spiralling him down the path to madness, and Penn knows how to tell this story beautifully. The movie’s tremendous cast is an indication of how much respect Sean Penn must have as a director and how many people want to work with him. It’s quite amazing the amount of big-name actors who make appearances in this film in very small bit parts that only garner a few minutes of screen time, and they include Helen Mirren, Benicio Del Toro, Vanessa Redgrave and Harry Dean Stanton. They all do great work and make big impressions in their limited appearances, but the real standout is Mickey Rourke, who has a very brief role as a mental patient whose young daughter went missing. Needless to day, Rourke’s career was not in the best shape at this time, but I think his tremendous work in this small bit part did a lot to remind everyone what a great actor he really is.

Of course, the main reason why all these great actors are relegated to such small roles is because The Pledge is Jack Nicholson’s movie all the way. Nicholson had previously collaborated with Penn in The Crossing Guard, playing a similar role as a man who had an unhealthy obsession with getting revenge on the drunk driver who killed his daughter. However, The Crossing Guard did not work well as an overall film because the narrative was heavy-handed and Nicholson’s performance was a little too broad at times. However, that is not the case with The Pledge as Nicholson delivers one of the most underappreciated performances of his career. He avoids going over-the-top while subtly portraying Jerry Black’s slow descent into obsession and keeping the character’s sanity very ambiguous. In fact, The Pledge makes the very daring decision not to shy away from ambiguity and delivers a dark, downbeat ending that offers no easy answers. This is not an easy ending for many viewers, which may be one of the reasons why The Pledge was not a great success when it was originally released. In recent years, films like No Country for Old Men have made it more acceptable to deliver ambiguous downbeat endings in mainstream films which deliver the message that crime does not always have a simple solution. In a way, The Pledge was almost a bit ahead of its time, which is why it seems to hold up really well nine years later. I’m not sure if Sean Penn will ever keep his promise about retiring from acting to become a full-time director, but if he can keep taking risks and delivering films as great as The Pledge, I’m sure I could live without ever seeing him act again.