City of Life is the first major international release as far as film production in the city of Dubai is concerned. It is an independent film which explores the city through its cultural, social, religious and economical aspects. While Dubai is a major tourist hot zone, the film does not portray Dubai simply as a spectacle (no shots of the famous landmarks like the Burj Al-Arab hotel are even shown). The city is treated the same way any other city in a film is viewed, with the story and its characters being the main focus. It is a gritty film that gives viewers an image of Dubai that is not often shared by anyone outside of those who reside there or in the surrounding areas. It can be argued that the film is influenced by Paul Haggis’s Academy Award winning Crash (2005) partly due to the different ethnicities present in the film, the interwoven stories and even some explicit reference to the title of the film itself. The film deals with the lives of the upper and lower classes, exploring the ways each person deals with others, with themselves and how they live with their place in society. City of Life can be lighthearted and fun, but can also be dark and serious, as it tries to portray everday life in the city.

First we are introduced to two characters, Faisal (Saoud Al Kaabi) and Khalfan (Yassin Al-Salman aka The Narcicyst), two local citizens who are very close friends. Faisal is part of the elite class in Dubai, while Khalfan is part of the lower class. The two share a healthy social life but Faisal’s dad, a strict, religious and respectable man among Dubai’s upper class, does not approve of Faisal’s negligence when it comes to partying, shirking his religious duties and consuming alcohol, when he should be looking for work. Faisal is a more reserved and somewhat worrisome figure, while Khalfan is a goodhearted man but when provoked, will lose his temper. The second story revolves around some uncertain romance between an airline hostess, Natalia (Natalie Dormer), and a successful man, Guy Berger (Jason Flemying), who is in marketing. Upon a chance meeting, Guy manages to win Natalia over and treats her to a whole new life of expensive meals, parties and he even gets her to act in a commercial he’s assigned to make.  Still, even with all the pampering he has given her, she doesn’t appreciate what he has done for her. Bitch? Not really, it’s mainly due to the fact that her friend, roommate and fellow airline hostess, Olga (Alexandra Marie Lara), has been warning her not to succumb to that playboy’s devious spell on the basis that he will simply dump her when he has had enough. Finally, the third story centers on Suresh (Javed Jaffrey), a struggling taxi driver, who has big dreams of becoming a Bollywood star. He encounters a club owner who gets him to perform some singing at his club. The problem is, he only earns tips at the club. Between his dreams and his tiresome boring job as a taxi driver, he tries his best to be patient hoping his hard work will pay off soon.

The movie is filled with numerous ideas and themes which have relevance all over the world. One of the most important ones is class difference. Suresh, for example, is mostly ignored, spat on (don’t worry, not literally) and his requests for taking his resume (which highlight his acting, performing arts experiences) are not taken seriously because of his status as a taxi driver. Faisal is discouraged to hang out with Khalfan by his father, because theme that gets explored is the dichotomy of tradition vs. modernity. Faisal’s dad represents the old ways of the Emirates. He is a conservative man who puts his family’s reputation, social status and his religion before anything. Faisal, representing the new youth of the Emirates enjoys partying and is more concerned with his social life than with his reputation and a career (as mentioned earlier). One last theme that I would like to mention, which appears towards the end, is about second chances. One scene in the film (which I will not reveal), causes some of these characters to rethink their lives and choose the directions they want to take. Vanity and power are both heavily demonstrated in the case of Guy Berger, a man with a huge ego due to his successful career, who thinks he owns anything he has his eye on (this very much  pertains to his relationship with Natalia). The script really depends on the characters intentions. For the most part, everything happens by their will and not necessarily for the sake of the plot. The very last scene right before the film ends is very memorable for me, as it really demonstrates how random life is, and how the choices  and decisions we make can affect someone else for better or for worse.

While this is indeed a thought-provoking film, I do not consider it to be a great one. This is solely because of the story. It is not that it is a bad story but this film really was an opportunity to do something completely new, and unfortunately I cannot help but feel that it borrowed numerous elements from generic Hollywood formulas. My main beef is the predictable nature of Natalia’s story. I have seen the same story done to death many times before in Hollywood cinema. Without spoiling too much, I really think the best thing to do would have been to remove Olga from the script and work around the romance between Natalia and Guy, leaving Natalia to realize and work out her issues on her own. I think that would have been a stronger approach both for authenticity and dramatic effect. Of course the filmmakers would argue that Olga is there as a conscience of some sort, but that’s just my opinion. It did bring my love for the movie down a notch, but it did not make me dislike the movie at all. The script does give Dubai enough depth to bring the city to life as a character of its own. The characters themselves are well crafted (with the exception of Olga), each having their own problems no matter how big or small they may seem.

I have to mention the acting. Alexandra Marie Lara comes off as the weakest performer in the movie, mainly because she seems too laid back whenever she is on screen. Disappointing, since she impressed me in Downfall (2004). Both Saoud and Natalie do a good job in their respective roles but the other three lead actors left more of an impression on me. Jason Flemying gives a good intense performance whether he is doing a comedy or a drama or a thriller. Here he’s great as the smooth talking playboy with a very arrogant attitude. I hope we do see him in another Guy Ritchie film in the future, as he really blends in well within that environment (not just because he’s English). Iraqi-Canadian hip hop artist, journalist and writer, the Narcicyst, makes a very impressive acting debut in City of Life. He manages to add an extra dimension to Khalfan, and balances the character’s rage and humor very nicely. He gives a very good, powerful performance, which will hopefully build him a good career in acting. Javed Jaffrey gives, by far, the most subtle performance. He out of everyone actually goes through real hardship in the story, as he is a desperate and poor human being. You really do feel the emotional turmoil he goes through in the film and sympathize with him greatly, hoping he finally gets what he wants. Also, Habib Ghuloom, who plays Faisal’s father, gives a very strong performance in the brief time we see him in. I almost shat my pants at one point because of how serious the man was.

One last note, this is the first feature film directed by Ali F. Mostafa, who previously won an award at the Dubai International Film Festival for his short film Under the Sun. He does a great job, not just with handling the actors and the story, but by capturing Dubai’s brightness and grittiness, and giving the city a life of its own. I look forward to seeing his next film, which I hope will top this one. Also, kudos to the cinematographer for the outstanding photography (very nice contrast between light and day). 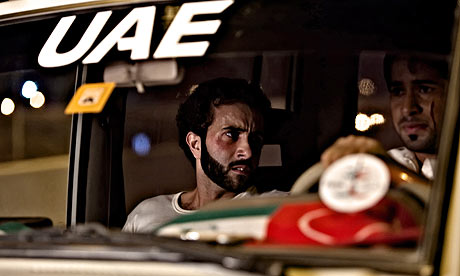 Overall, City of Life is a film that will definitely appeal to an international audience on many levels. It presents an unbiased image of Dubai to those foreign and domestic, and by featuring characters from the east and the west, makes one feel like Dubai is a city just like any other city, giving them room to think about all the questions the film poses to them. It gives an idea of the struggles the underprivileged have to fight, and how greed has corrupted the wealthy. Ali F. Mostafa explores his heritage in this city, bringing it to life in this parable of sorts. Again the only problem with this film is that it resorts to Hollywood tehniques when it comes to the story. As there are many different issues to explore, including the rise of street gangs in Dubai, it weaves all these elements into a derivative formula. Even with that however, I really do hope it gets worldwide recognition and I honestly hope that Ali will craft a completely original idea for his next film. The film bridges the gap between the east and west as both cultures share the same thing, life’s reality (not as lame and corny as it sounds, believe me). Everyone is somehow connected, and when they clash, their lives change completely. Finally, a real serious international film for Dubai (I don’t care what the fangirls say, but Sex and the City 2 does not count). I recommend the film to everyone around the world, because I truly believe that there is something in the film for all to enjoy. Its a good film, but it isn’t an instant classic. Oh and in case anyone is wondering, I do think this film is better than Crash.

Good luck Ali F. Mostafa, and hopefully this film brings you all the success you need.