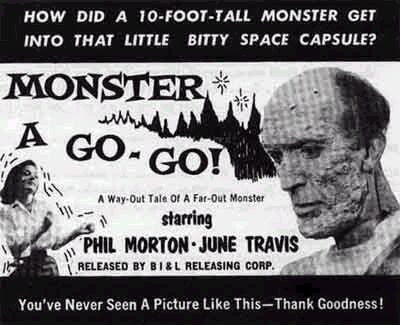 On yesterday’s “Shouts From the Back Row” podcast, I proclaimed that the infamous Monster A-Go Go was my choice for the worst movie of all time. However, my rant about the film could not properly do justice to how bad it really is, but I think this website has succeeded. This brave, brave soul has gone over the entire film from beginning to end to point out every single thing that’s wrong with it, and has done so in quite an hilarious fashion. Instead of actually going through the painful experience of watching the film, I’d recommend you check the site out to find out just how much of an abomination Monster A-Go Go really is!

As a bonus, here’s the original theatrical trailer for the film, where they claim that the monster will you give you the “whim whams” (?!). I also love how the narrator says this movie has “something for everyone”. Yes, if you really enjoy watching stock footage of helicopters landing, people wandering through the woods, and firemen unrolling long hoses, Monster A-Go Go is the movie for you!