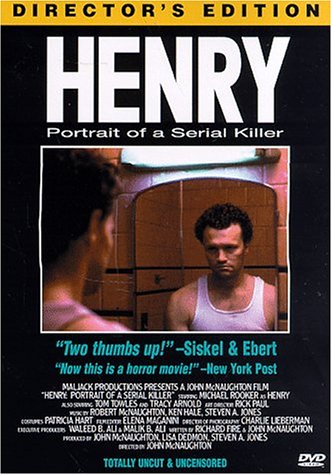 Imagine that you’re a producer and you give an ambitious young filmmaker $110,000 to make a film, and all you ask is that it’s a horror movie with plenty of blood and gore in it. It’s the 1980s, where low-budget teenage slasher films are hugely popular, so you expect to make a decent return on your investment. However, instead of just delivering a cheesy low-rent slasher flick, your filmmaker ends up delivering a REAL horror movie that turns out to be one of the most disturbing films ever made. Such was the case with Henry: Portrait of a Serial Killer, which was filmed in 1986, but did not receive a wide theatrical release until 1990, due to problems with the MPAA ratings board, and the fact that the producers weren’t particularly proud of having their name attached to such an infamous film and would have just preferred Henry to have stayed buried forever. However, while Henry: Portrait of a Serial Killer is an undeniably disturbing and unpleasant experience, it’s also a brilliantly made one that’s surprisingly unexploitative about its subject matter and is one of the all-time greatest examinations of the world of a psychopath. It doesn’t seem to be very well-remembered today, except by devout horror fans, but it is definitely a powerful piece of work that deserves further attention.

Henry: Portrait of a Serial Killer was directed by John McNaughton, who would go on to direct such Hollywood films as Mad Dog and Glory and Wild Things. Though the characters in the film have no last names, it’s no secret that Henry (Michael Rooker) is based on Henry Lee Lucas, one of the most infamous serial killers of all time. Lucas claimed to have responsible for over 600 murders, but no one can ever be quite sure how many people he really killed. Henry’s friend in the film, Otis (Tom Towles), is based on Henry Lee Lucas’ real-life accomplice, Ottis Toole, a serial killer who may have indirectly lead to the creation of America’s Most Wanted since he is believed to have responsible for the murder and decapitation of John Walsh’s six-year old son, Adam. In this film, Henry and Otis are ex-cons who live as roommates in Chicago. We also meet Otis’ sister, Becky (Tracy Arnold), who has also just gotten out of an abusive relationship and has come to Chicago to live with them for awhile. These three characters are the entire focus of the film. There is not one law enforcement figure to be seen anywhere in Henry: Portrait of a Serial Killer, which wants to keep the viewer confined entirely within the day-to-day world of a serial killer and the other people in his life. For the first half hour of the film, the viewer is treated to many gruesome images of Henry’s dead victims, but none of his actual murders are shown on-screen until Henry drags Otis into his world. They go out one night and pick up two prostitutes, whom Henry winds up murdering. Otis is quite shocked by this and is equally as shocked by how casually Henry can follow up his crime by going to get fast food.

Now, even though Otis is uncomfortable with the idea of killing at first, he soon comes to relish it and starts to enjoy being a serial killer a lot more than Henry does. Henry: Portrait of a Serial Killer makes a real interesting structural decision as the film goes along. Henry kind of has his own method and warped code of ethics about killing and is disgusted when Otis becomes very sloppy and irresponsible and starts crossing the line into areas like rape and necrophilia. The character of Otis is one of the more vile, hateful characters you will ever see in a film and it’s clear from the outset that he has incestuous thoughts about his sister, Becky. In contrast, Henry treats Becky very nicely and almost seems like a perfectly normal gentleman, next to Otis. Amazingly, because Otis devolves into such a deplorable human being and Henry seems to be on the verge of developing a romantic relationship with Becky, the viewer actually finds themselves sympathizing with Henry during the last act of the film and almost forgetting about all the evil acts he has committed! We wind up caring about him simply because he’s the lesser of two evils, I guess. This film does a lot to make the viewers question themselves and their own perceptions. Despite being a grim movie, Henry does have its fair share of gallows humour, and the most entertaining scene involves Henry and Otis going to buy a stolen TV from a fence, who turns out to be such an obnoxious asshole that they decide to kill him. This scene is also hilarious to watch because of the ridiculously outdated technology this guy shills.

Now, because that scene was filled with black humour and the victim was really unsympathetic, the viewer doesn’t have to feel guilty about enjoying the violence that was presented. It isn’t long afterward, however, that Henry really throws the viewer for a loop by delivering one of the most disturbing scenes of violence ever seen in a film. It involves Henry and Otis watching a videotape of a home invasion where they murder an entire family. The whole scene is presented in one take from the point-of-view of Henry’s video camera and is so brutally realistic, documentary-like, and hard to watch that you may feel guilty about ever having enjoyed watching an act of violence in a film. You can only imagine how Henry‘s producers felt when they were expecting some cheesy exploitation film and got this instead. Henry is such an unsettling experience because none of the scenes are presented from the point-of-view of a normal person. Even though Becky is the most identifiable character in the movie, there’s still something off about her. This isn’t a movie that climaxes with her being the plucky heroine who has to get away from the evil clutches of Henry. When she finds out that Henry was originally in prison for killing his mother, that’s when she starts to find him most fascinating and develop strong feelings for him. Despite its many images of gruesome violence, one of the most chilling sequences in Henry is a quiet dialogue scene where Henry and Becky talk about their abusive childhoods and Henry can’t even keep the facts straight about how he killed his mother. Though the scenes of violence are pretty disturbing too…

Michael Rooker’s performance as Henry is just bone-chilling at times, but he also does an amazing job at making the audience care about what happens to him even though he’s undeniably evil psychopath. Rooker has since gone on to have a successful, very well-deserved run as a character actor in Hollywood, with prominent roles in such films as JFK, Cliffhanger and Mallrats. Tracy Arnold did not do much acting after her appearance in this film, but she also does a very good job as Becky. Tom Towles has worked steadily in horror films since then, as he played Harry Cooper in the 1990 Night of the Living Dead remake and has appeared in all of Rob Zombie’s movies, but he really deserves to have had a bigger career in Hollywood since he does such a tremendous job at making Otis into one of the most hateful movie characters of all time. I’ve always ascribed to Roger Ebert’s statement that a movie isn’t what it’s about, but how it’s about it. Henry: Portrait of a Serial Killer is certainly not for everyone and is not an easy movie for many to sit through, but I think that even the most disturbing subject matter is worth watching if the filmmakers present it well. And John McNaughton and his cast certainly do succeed brilliantly, letting the viewer enter a world that none of us would ever want to live in, but would certainly be curious enough to visit for 83 minutes. Henry may not be talked about a lot today, but it deserves to be studied and examined by all aspiring filmmakers as a model for how you can handle harrowing material without being exploitative.