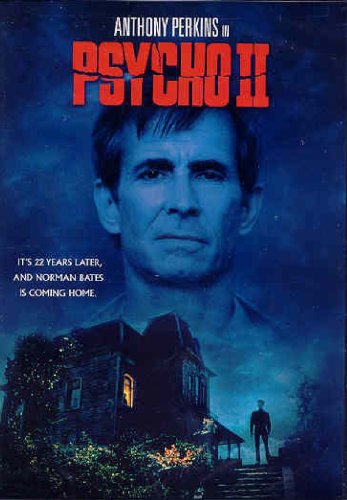 In the 1980s, horror sequels were being released by the truckload. It seemed almost inevitable that someone would have the nerve to make a sequel to one of the most renowned horror films of all time: Sir Alfred Hitchcock’s Psycho. Naturally, when this decision was eventually made, a lot of people cried “sacrilege” and it seemed certain that no matter how good Psycho II turned out to be, many folks were just not going to give it a chance. Ironically, Universal Pictures’ decision to make a Psycho sequel was done almost completely out of spite. Robert Bloch, author of the original Psycho novel, decided to write his own novelization of Psycho II, which was intended as both a spoof and critique of the numerous slasher films that were being made in Hollywood at the time. Universal wasn’t particularly happy about this, so they decided to make their own version of Psycho II that had nothing to do with Bloch’s novel. With that sort of mindset behind the project, one wouldn’t have expected great things from Psycho II, but it is a damn good sequel and a highly underrated horror-suspense film that probably would have made Hitchcock proud.

The filmmaker who was given the unenviable task of following in Hitchcock’s footsteps was Richard Franklin, a noted Australian horror director who made such films as Patrick and Roadgames before bravely taking this assignment for his Hollywood debut. After this, he would also direct one of my favourite “Underrated Gems”, Cloak & Dagger. The screenwriter for this project was Tom Holland, who would go on to direct such popular horror films as Fright Night and Child’s Play. Robert Bloch’s original Psycho II novel had a storyline about Norman Bates escaping from a mental hospital and going on a killing spree, but Holland would take the far more interesting approach of following Norman as he tries to start a normal life again and maintain his sanity. As the film begins, Norman (Anthony Perkins) is legally declared sane and released from a mental institution after 22 years. Marion Crane’s sister, Lila Loomis (Vera Miles) is none-too-happy about that, but many people genuinely do think that Norman is cured and deserves to live in the outside world again. Norman returns to his old house by the Bates Motel and takes a job working at a nearby diner. To his horror, he eventually discovers that the new owner of the motel, Mr. Toomey (Dennis Franz in a wonderfully scuzzy performance) has decided to turn it into a sleazy adult establishment.

At the diner, Norman meets a young waitress named Mary (Meg Tilly), who seems to have no place to stay and eventually comes to shack up with Norman at the old Bates house. It’s pretty easy to figure out right away that Mary is actually Lila Loomis’ daughter and that the two women are trying to pull an elaborate scheme to convince Norman that his mother is still alive, in hopes of causing him lose his sanity and get locked up again. After awhile, however, Mary really starts to care about Norman and genuinely believes that he is trying to change. A few murders take place, but Mary has good reason to believe that Norman couldn’t have committed them and that there is another killer out there. Psycho II makes an interesting structural decision for a horror sequel in that the villain from the original film almost becomes the victim here. Norman comes across as a genuinely sympathetic and likable individual throughout most of this film, and it’s very easy for the viewer to root for him and hate Mary and Lila for trying to drive him insane again. Of course, there are still plenty of odd things about Norman and the way he acts, so there’s no way one could ever fully trust him or his sanity. Of course, Anthony Perkins is completely invaluable in making this material work. Believe it or not, he had originally turned down the chance to play Norman Bates again, but changed his mind once the studio started looking at other actors for the role, including Christopher Walken! While it would have been very interesting to see Christopher Walken playing Norman Bates, Psycho II never would have worked as well it does without Anthony Perkins. While Vince Vaughn was a pretty disastrous casting choice to play Norman in Gus Van Sant’s infamous Psycho remake, it’s doubtful that ANY other actor could effectively assume the role since Anthony Perkins IS Norman Bates! He always does a brilliant job at handling scenes like this where he has to delicately balance a fine line between normality and insanity.

Anyway, I think the main reason I’ve never thought that Psycho II was an unnecessary sequel is because Norman Bates was not the focal point of the story throughout large portions of the original Psycho, but this time, you get to spend the whole film with him. Psycho II makes for an interesting character study, but it is also very well-directed, well-structured and cleverly plotted horror-thriller that constantly keeps the audience guessing. It does a splendid job at paying tribute to Hitchcock and the original film while still building an identity of its own, and there’s a nice undercurrent of black humour to go with the horror. The film builds up to a darkly funny twist ending that some people have always found silly and unnecessary, but personally, I’ve always loved it. It does exist mainly to leave the door open for another sequel, yet I think it would have been the perfect way to conclude the story of Norman Bates. Indeed, the next sequel, Psycho III and the eventual prequel, Psycho IV: The Beginning, both turned out to be mediocre and, of course, the less said about the Psycho remake, the better. Unfortunately, the Psycho series did not quit while it was ahead, but that doesn’t undermine the fact that Psycho II is a very strong and worthy sequel. While some films may seem too iconic to ever merit a sequel, this just goes to show that anything’ s possible when the people involved decide to put a lot of effort into it.