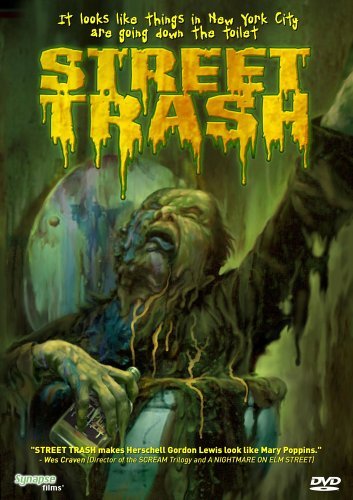 When I wrote my column about Mother’s Day last week, I warned you that some of my Halloween-related “Robin’s Underrated Gems” columns were going to blur the line between “underrated” and “guilty pleasure”. Well, I’d be hard-pressed to find a horror film that blurs the line more than Street Trash. In fact, I’d almost consider Street Trash to be underrated just because you don’t often see it on many lists of the most vile, depraved films of all time, but it definitely deserves that recognition. However, the difference is that while many of the other infamously vile films I’ve seen, such as Salo: 120 Days of Sodom and Bloodsucking Freaks, have legitimately disgusted me and made me feel embarrassed to be watching them, I actually enjoy the hell out of Street Trash! If you’re not a fan of horror, gore or sick humour, then there’s no way in hell you should ever watch this film, but fans of the genre definitely need to give it a look since it’s been a pretty overlooked and neglected gem for a long time. Street Trash is most definitely trash, but it’s very stylish, inventive and hilarious trash, and you’ll probably never see anything like it ever again.

Even though it contains a lot of violence and gore, it’s hard to decide whether to simply classify Street Trash as a horror film because it tries to be an awful lot of things. The film’s screenwriter, Roy Frumkes, once stated: “I wrote it to democratically offend every group on the planet”. While he definitely did succeed, but there’s a lot more ambition here than you’d expect from such a grimy, low-budget B-movie. The film literally does focus on the “street trash” of New York City, specifically a large group of homeless people that live in an auto junkyard, and it functions as an ensemble piece that contains multiple story threads and a wide variety of colourful characters. Trying to describe the plot of Street Trash is no easy task since the film doesn’t seem too concerned about focusing on one, but it does contain one main hook that gets the story moving. A liquor store owner finds a case of cheap booze named “Tenafly Viper” in his basement, which is over sixty years old and has gone bad, but it’s not like any of the drunken hobos who frequent the store are going to be too concerned about that. One of the homeless people buys a bottle of the tainted liquor and drinks it, and Street Trash establishes its credentials right away by having the guy melt into a pile of goo and flush himself down the toilet!

Now, after the tainted liquor is introduced in the first act, you’d think it was going to be the driving force behind the film’s narrative, but Street Trash pretty much forgets about the liquor plotline for NEARLY AN HOUR before they bring it back and decide to build the third act around it! During that time, the film introduces a ton of different story threads and characters and I’ll attempt to give you a brief rundown of some of them:

– the two “heroes” are Kevin and Freddy, a young pair of homeless brothers who live in the junkyard; Kevin has a major crush of the junkyard’s Asian secretary, Wendy, who’s always having to fight off the advances of her sleazy obese boss, Mr. Schnizer.

– the junkyard is run by Bronson, a deranged Vietnam veteran who heads his own gang and loves to terrorize people, especially Freddy and Kevin; an angry Dirty Harry-esque cop named Bill also keeps trying to bust Bronson and his gang.

– Freddy winds up getting involved with the mistress of a mob boss named Nick Duran, and the woman is raped and murdered by Bronson’s gang at the junkyard; meanwhile, Duran gets involved in a feud with a smartass doorman who tries to snitch on him, which has nothing to do with the main plot at all, but is funny as hell! The end credits even involve Duran singing a theme song about himself!

Even Raymond Chandler would say this plot is awfully convoluted! As you probably guessed, Street Trash is not the most focused film of all time as it spends its entire second act just meandering all over the place and taking us into the depraved world of these characters. But even though the plot seems to be going nowhere for long periods of time, the film still manages to entertain. While these may be vile, sleazy characters, they’re not stick figures and each one of them gets their own unique and colourful personality. It’s hard to determine whether Street Trash is supposed to be a horror film with a lot of black humour, or a black comedy that just happens to have horror scenes in it. Whatever its intentions, the results are genuinely laugh-out-loud funny at times. In this random scene, a homeless guy named Bert trying to shoplift a grocery store, and while it doesn’t really have anything to do with the rest of the movie, it’s still quite hilarious!

Anyway, I haven’t even begun to scratch the surface of all the depravities present in Street Trash. In addition to the aforementioned melting scenes, there’s a lot of gore and nudity on display here, along with scenes of rape, necrophilia, beheadings and people exploding into several pieces. In one scene, Bill the cop even sticks his own fingers down his throat in order to make himself vomit on a suspect! Since many of the characters in this film are filthy homeless people who look like they haven’t washed themselves in years, few movies will ever make you feel like a taking a shower afterwards more than this one. However, the folks who made this film were not untalented people. While this is the only directorial credit of his career, James Muro would go on to become one of the top Steadicam operators in Hollywood, working on such major films as Titanic, JFK and Dances With Wolves. Street Trash contains a lot of very inventive direction and camera work, and the film is far stylish and well-crafted than you’d expect for such a sleazy exploitation flick. And, believe it or not, a future A-list Hollywood director would get his start on Street Trash as none other than Bryan Singer worked as a grip on this film! The fact that he came back to do interviews on the DVD’s retrospective documentary shows that he’s not too ashamed about getting his feet wet on such a depraved film. It goes without saying that Street Trash is not for all tastes, but horror fans with an open mind and a VERY warped sense of humour owe it to themselves to give it a look. The Back Row loves throwing around a phrase we coined called “passing the cactus”, so I think I owe it to you to present the ultimate “passing the cactus” moment from Street Trash. The most infamous sequence in the film is undoubtedly the one where Bronson and his gang play a game of “keep away” with a guy’s severed penis! It’s safe to say that if you can watch the following clip and laugh hysterically, then Street Trash might be the movie for you. All others need not apply.