Remember, remember, the 5th of November: a Look Back at V for Vendetta

Based on one of the most influential graphic novels of all time, this film could not have been released at a better time. Coming off of a global crisis, where the threat of terrorism had risen to great heights, where security and surveillance had been heightened at great costs and where countries struggled for world power, V for Vendetta explores all those issues in a futuristic world where governments use fear to control their people. Tying into Guy Fawkes’s early 17th century gunpowder plot, George Orwell’s 1984 and numerous events of the 20th and 21st centuries, V for Vendetta is sure to make one question their own governments and the agendas those governments keep.

The is story set in a totalitarian Neo-England (originally written in the 1980s in response to Margaret Thatcher’s controversial regime) and revolves around a young woman, Evey (played by Natalie Portman) who works at a TV station. After illegally leaving her house after the curfew hours placed by the government (known as Norsefire) she is surrounded by three men of the nation’s secret police, known as the Finger, who are planning to rape her. At that moment, a man dressed in black wearing a Guy Fawkes mask and calling himself V (played by Hugo Weaving) rescues her from her attackers and gives her a speech based on man’s freedom and governments’ tyrannical nature. He takes Evey up to the rooftops of a building which overlooks the old Bailey (a famous courthouse in London) at midnight. Music begins playing through speakers placed around a nearby building and the Bailey explodes. This event causes a lot of talk throughout London and a meeting between England’s high chancellor Adam Sutler (played by John Hurt) and members of the Norsefire party results in the decision by the government to hunt down the terrorist responsible for the explosion. The events that follow involve V hijacking the TV station that Evey works for and broadcasting a message for people to meet him outside the House of Parliament on November 5th one year from the day. Evey manages to rescue V from a tight spot as the police close in, and he leads her to his secret lair. From there the film explores V’s agenda and ideas, the government’s own cover-ups, questions about what rights the government should have,  and the relationship between the characters.

I have never read Alan Moore’s graphic novel (published by DC comics’ Vertigo press), but even so, I feel that it is an important piece of literature based on the ideas presented in the movie adaptation. I understand that Alan Moore hates any film based on his work, and for the most part, he definitely has the right to. While the original V for Vendetta novel is set in England and contained themes of anarchy used to combat fascism, Alan Moore believes that the film should have been set in the United States since it did contain many references (both subtle and blatant) to all the issues present during the decade in which it was produced, including the notorious Abu Gharib incident and George W. Bush’s unpopular political ideologies. The film abandoned his earlier themes in the book in favor of American political ideas such as “neo- conservatism versus liberalism”. I personally think that V disguises anarchy with freedom fighting. There are plenty of anarchic ideas present in the film, where the character riles up the people so that they can unite and rise up against the totalitarian government.

One of the biggest mysteries that the film and, I would assume, the graphic novel brings into question is the identity of V. While there is a small piece of back story present in the film (I am referring to the St. Mary’s incident), there really is no way of knowing who this man actually is. The film opens with the arrest of the famous anarchist Guy Fawkes, which results in his hanging. Evey’s voiceover explains how V brought Guy Fawkes and his sacrifices to people’s attention and made them realize how much more powerful he is as an idea than as a man of flesh and blood. He is symbolic of peoples’ liberty and rights and works as a kind of living piece of propaganda.

There are some clever moments that use the grammar of film to convey the idea that V, without an identity and existing primarily as an idea rather than a man, can be found in the other characters as well. After the main title appears, V sits down at his dressing table getting ready, staring into a mirror which leads to Evey getting ready to go out herself staring out of her own mirror. This tells us that these two characters might just be two sides of the same coin, and as the movie progresses we do find that they are indeed reflections of each other. 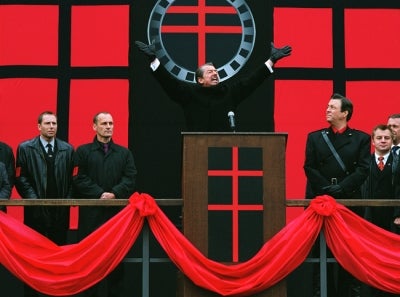 The film is pretty damn good, in my opinion. Whether Alan Moore approves of the film or not is irrelevant to the way people should watch it, because while it does stray away from some of the themes and ideas that existed in the novel, it also contains the essence of the story and does in fact, hold its own as a film. For the record, I do think this is, so far, the best film adaptation of any of Alan Moore’s works. Produced and written by The Matrix creators the Wachowski brothers (or brother and sister as it turns out today) and directed by James McTiegue, the film manages to create the dystopic future that could lie in store for London. Natalie Portman does a good job carrying the emotional weight that Evey needs. Hugo Weaving (who is never clearly seen as Hugo Weaving) does a badass job, and obviously has a lot of fun playing V, mixing the right body language with the serious yet playful wit and sophistication that one would expect of the character. Other actors like John Hurt, Stephen Fry, Stephen Rea and Tim Piggott Smith do really good jobs creating diverse, well-rounded characters that we get to see at their strongest and at their weakest.

The ideas, themes and issues in V for Vendetta have been around since the beginning of leadership and governments and will be important to think about and consider until the end of time. I think it is one of the best comic book adaptations to date and it definitely proves that comics are not necessarily the stuff of unintelligent literature.

“Remember, remember the 5th of November, the gun powder treason and plot. I know of no reason why the gunpowder treason should ever be forgot.