Posted on November 6, 2010 by curtisrunstedler 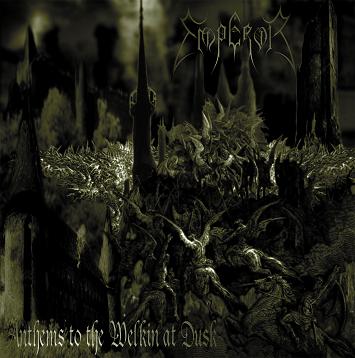 I had hoped to release this list by Hallowe’en, but unfortunately it’s been on the back burner until now. I’ve always had a passion for black metal, from the searing vocals to the ferocity of the instrumentals and the sombre qualities of the actual music. Of course, I send my accolades to the musicians with more polished acts, but I’ve also tried to incorporate some of the rawer black metal classics here. October was a month of almost relentless black metal listening for me, and I hope that my dedicated ears have produced worthy results.

1. Anthems to the Welkin at Dusk by Emperor

Emperor’s sophomore effort progresses further into the complex sound and melodic perfection of their debut, In the Nightside Eclipse. What sets Anthems in the Welkin at Dusk apart from their first album, however, is their more mature approach to the song structure and lyrics. Vocalist Ihsahn is deeply influenced by Miltonian  and Nietzschean imagery, and this has a profound impact on songs such as “With Strength I Burn” and “The Loss and Curse of Reverence.” “Ye Entrancemperium” contains some of the most awe-inspiring passages of melody ever conceived. Alongside Samoth’s engaging guitar work and Trym’s excellent drumming, Emperor create a rich plethora of sound, tempered by sonic ferocity, violence, agony, and moments of sombre bliss, making Anthems to the Welkin at Dusk an essential addition to any musical library.

While it’s technically an “unblack” metal, Antestor has a spot on the list because of their professionalism and sheer competence. If Det Tapte Liv was indicative of their budding talents, then The Forsaken is their full blown magnum opus. The Forsaken is a triumph of musical ambition, from its orchestral components to its evolved concept of Christian philosophy. These aren’t simple God-loving lyrics; Antestor weaves subtle lyrics of suicide and doubt, which is virtually unheard of in the Christian metal realm.

Although Dark Funeral’s actual songwriting abilities are questionable, their 2003 live album in South America highlights the intensity and fury that is the essence of black metal. Dark Funeral is in fine form here, playing at full volume all of the time. It’s not worth critiquing their lyrics here, as their songwriting is about as generic and blatantly Satanic as can be. However, Dark Funeral succeeds with this album because they are so relentless, creating a powerful concussion of sound to deafen all ears.

4. Storm of the Light’s Bane by Dissection

The Swedish legendary black metal band Dissection showcase their innermost talents in their classic 1995 release Storm of the Light’s Bane. As the title suggests, it’s a captivating, atmospheric experience; beautiful, grandioise, and spiteful simultaneously, without losing its fervour or momentum. From what I understand, this was vocalist Jon Nödtveidt’s final album before he was incarcerated. Dissection’s releases after this were good, but somewhat disappointing, in comparison with their earlier releases. Relish in Storm of the Light’s Bane for the masterful album that it is, for it is Dissection at their finest hour.

I discovered this buried treasure while perusing through a catalogue of essential Norwegian black metal releases. Sadly, it’s Kvist’s one and only album, but it’s a classic of its kind. The album is comprised of only six tracks, but they’re six tracks of grandeur and mayhem. Although the songs have a somewhat raw feel to them, they are enhanced by the soaring ingenuities of their musicians, evoking haunting black forests and endless cemeteries.

6. Heart of the Ages by In the Woods…

It sounds like the name of a Fable song and it’s almost too progressive and ethereal in its execution to be considered a black metal album, but Heart of the Ages is a triumphant recording and ultimately rewarding with multiple listens. Apparently, this is the only black metal release by In the Woods…, which is unfortunate, as they exhibit some of the most tortured vocals I’ve ever heard (along the likes of Akitsa in their most harrowed hour). Although I haven’t heard their other releases, In the Woods… have something for every true black metal fan, from  the clean vocals to the anguished vocals to the extended passages of forestral singing (the female singer is exceptionally talented).

7. Below the Lights by Enslaved

Enslaved have always been at the top of their game, but it wasn’t until they veered off into a more progressive direction with Mardraum that they really developed a sound of their own. Below the Lights is the highlight of their progressive foray, showing their deep respect for the Viking sound and black metal, as well as their classic rock influences. Raw black metal purists will argue that Enslaved were striving too far from the essence of black metal with this release, but it carries ten times the power and capacity of Transilvanian Hunger (I love that album, so that’s saying a lot) and emerges as a fulfilling, riveting listen.

8. Prometheus: Discipline of Fire and Demise by Emperor

Emperor’s swansong is virtually unlistenable initially, and it is only with patience and an open mind that the beauty and amazingness of their final recording can truly be appreciated. Psychotic tempo changes, extensive layering and expansive progressive elements shape this masterpiece, and with repeated listens, the structured qualities of each individual layer can be appreciated.

Dissection has always been a great band, and The Somberlain is further evidence of that.

Dimmu Borgir’s third album builds upon their melodic and thematic elements, spiralling the band into new, unexplored territory, which is both enchanting and terrifying. Dimmu Borgir is often bashed for endeavouring for commercial appeal, and while Enthrone Darkness Triumphant is more accessible than Stormblast or other Dimmu Borgir releases, the musicians are artistic geniuses. “Prudence’s Fall” and “In Death’s Embrace,” for example, postulate the strengths of the Norwegian composers and their passion for blending calculated orchestral bliss with unfettered chaos. They enthrone darkness triumphant indeed.

This entry was posted in Lists, Music. Bookmark the permalink.