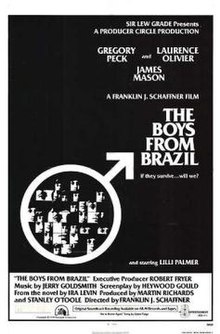 One criteria I always like to use when selecting my candidates for “Robin’s Underrated Gems” is finding films from the past that would never get made in today’s Hollywood. Or rather, they might get made, but they would never feature renowned A-list actors. I mean, would you believe that Gregory Peck and Sir Laurence Olivier once starred in a film about the Nazis trying to take over the world again by making 94 clones of Adolf Hitler?! If anyone offered a project like that to actors of that caliber today, their agents and publicists would either make sure their clients never found out about it or would do everything in their power to convince them not to do it. The film I am referring to is called The Boys from Brazil and, believe it or not, a remake has been in development in Hollywood for many years. I’m not sure if the remake will ever get made, but I just have the feeling that actors like Michael Caine or Sir Anthony Hopkins won’t exactly be jumping at the chance to star in it. The 1978 version of The Boys From Brazil is based on a best-selling novel by Ira Levin, who also wrote Rosemary’s Baby and The Stepford Wives. His storyline here is absolutely ludicrous and absurd, but if you’re willing to suspend your disbelief, it’s actually quite clever as well and undeniably entertaining.

Many notorious Nazi war criminals successfully fled to South America after World War II, and the most infamous of them was probably Dr. Josef Mengele, who was nicknamed “The Angel of Death” because of the inhumane experiments he performed on Jewish inmates in the concentration camps. Mengele escaped to South America for many years and never faced justice for his crimes, as he died of a stroke while swimming not long after The Boys From Brazil came out. In this film, Gregory Peck is cast as Mengele in one of the very few times he ever played a villain in his long and storied career. He has assembled a group of fellow Nazi war criminals in Paraguay and announces that the Third Reich will soon rise to power again because of a very strange and elaborate plan that he has concocted, which involves the assassination of 94 seemingly unremarkable 65-year old civil servants throughout the world. His meeting is secretly tape-recorded by a young man from the Jewish Defense League named Barry Kohler (Steve Guttenberg – yes, Steve Guttenberg!), who tries to pass on the information via telephone to a renowned Nazi hunter named Ezra Lieberman (Laurence Olivier). Kohler is immediately caught and killed by the Nazis, but Lieberman becomes suspicious and decides to find out what’s going on. After following up on many leads and eventually consulting with a cloning expert (Bruno Ganz, who would go on to become a popular Internet meme after delivering an amazing performance as Hitler in Downfall), Lieberman figures out that Mengele has successfully made 94 clones of Adolf Hitler!

Now, I definitely give The Boys From Brazil a lot of credit for being way ahead of its time as this is one of the very first films to deal with the subject of cloning. As silly as the plot about cloning Hitler may be, Ira Levin actually lets his story unfold surprisingly well. When you first hear about Mengele’s plan to assassinate 94 senior citizens, you wonder what the hell he’s trying to do, but the more you learn about Mengele’s idea, the more you realize how ingeniously clever it is. Since Hitler’s father was killed at the age of 65, Mengele wants to re-create der Fuhrer’s childhood as accurately as possible for his clones so that there’s a greater chance they’ll turn out the same way. This plan would actually be kinda neat if it wasn’t dreamed up by an evil Nazi. Of course, The Boys From Brazil makes the wise decision not to take itself too seriously. I already mentioned that this is one of the very few times where Gregory Peck was asked to play a villain and there’s probably a good reason for that. Peck is hilariously miscast as Mengele, but that doesn’t mean he’s not entertaining to watch. Peck decides to turn up the camp level to full blast here, and considering what a loathsome, unsympathetic individual Mengele was, I’m sure no one would complain about Peck going way over-the-top and almost portraying the guy like a buffoon. Laurence Olivier had just come off of playing an evil Nazi war criminal who fled to South America in Marathon Man, so it’s nice to see him jump over to the other side and play a Jewish Nazi hunter here. Olivier is terrific as Lieberman and does a remarkable job at playing this absurd material with a straight face and giving the story a lot more credibility than it deserves. Of course, Olivier does not hesitate to turn on the camp at times, especially during this hilarious climactic fight between Lieberman and Mengele.

Olivier was so good that he actually earned an Oscar nomination for his performance, and Boys From Brazil also got nominated by the Academy for its editing and music score. I just cannot even imagine the Academy acknowledging a film like this today! The Boys From Brazil is utterly ridiculous, unbelievable and distasteful, but damn, is it a lot of fun to watch! This is proof positive that even the most goofiest storylines can work if everyone involved decides to give it their all. The direction by Academy Award-winning director Franklin J. Schaffner (Patton) is very strong, the score by Jerry Goldsmith is terrific and the production values are first-rate. The two stars throw everything they’ve got into their roles, and a great cast of character actors like James Mason, Denholm Elliott, Michael Gough, Rosemary Harris and Anne Meara give the material as much credibility as it could possibly have. And where else are you ever going to find Sir Laurence Olivier acting out a scene with Steve Guttenberg?! I just have a feeling that if they try and remake Boys From Brazil today, it will either be a laughable disaster or completely watered-down and generic. As it is, this version of The Boys From Brazil is a very enjoyable relic from a time in Hollywood when they weren’t afraid to throw everything to the wind and take more chances. When people think of great Gregory Peck moments, they may think of films like Roman Holiday, The Guns of Navarone or To Kill a Mockingbird, but my all-time favourite Gregory Peck moment will always be: “Shut up, you ugly bitch!!!”.