Posted on January 1, 2011 by curtisrunstedler 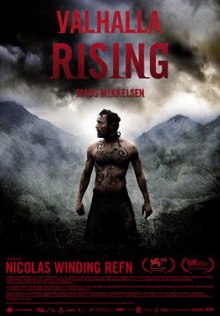 Technically, it hasn’t been released on DVD yet, but Nicolas Winding Refn’s latest film Valhalla Rising is so awesome that I can’t resist talking about it. Known in his Danish homeland for the ultraviolent Pusher crime trilogy, Refn has already established himself upon the national scene. Valhalla Rising, however, is a foray into the international. The film is all in English, and was shot entirely in Scotland, apparently. I would assume that it takes place during the Viking invasions in the early Middle Ages. Watching the trailer, which is quite misleading, you’re led to believe that it’s a gory, wrestling, action packed Viking movie. This isn’t the case, and it isn’t some Hollywood fluff. It’s a deeply penetrating meditative film, evoking the alienation and disorientation of Werner Herzog’s film Aguirre, the Wrath of God and Andrei Tarkovsky’s masterpiece Andrei Rublev at times.

It’s an extremely violent movie. In one particular scene, the one-eyed antihero tears out a man’s entrails with his bare hands. My jaw actually dropped when I saw this scene. I’ve seen raw, brutish violence at its most primal level, but there seems to be absolutely no sense of morality in Valhalla Rising.That being said, the characters exist in a purgatorial landscape. Murky clouds blot the endless sky, and as the film progresses, their journey becomes a descent into the hellish unknown. The one-eyed antihero (who the little boys calls One Eye because “[He’s] only got one eye”) is haunted by blood red seas, and their journey towards “The Holy Land” is fraught with peril and fear. Mist surrounds them with a ghostly presence. It’s like the souls of the dead are waiting for them in waters deep.

Anyway, the first half of the film takes place in the Scottish highlands. One Eye is enslaved by Viking invaders, fighting with his wits and brute strength in order to survive. His origins are relatively unknown. I’m assuming that he’s a Pict with all of those markings, but I could be wrong. He eventually escapes his captors, slaying everyone except for a little boy (the blond kid you see in all of the promotional photographs) whom he becomes quite fond of. The boy brings out his sensitive side, revealing the more poetic aspects of the film. It’s a very visual film, featuring some amazing cinematography of both the Highlands and the “New World.”

The second half of the film involves the one-eyed warrior forming an unlikely team with a band of Christian Crusaders who are set upon reaching the Holy Land. Instead, they travel west and reach North America (Newfound, most likely) where death awaits them. Valhalla Rising is a great film, but thematically it doesn’t work as well as Aguirre, the Wrath of God in the second half.

As the Crusaders met their fates, I was still left with many questions. It’s a beautiful film, as I mentioned earlier, and as a medievalist, I find the content to be super intriguing. The music is quite disconsolating and stirring, building for moving crescendos and establishing a fitting pace for the film. The atmosphere is so sublime in its conception, which is what truly drove the film for me. Refn creates this frightening wilderness which is gorgeous to look at it, but it’s so haunted and alive, and it always feels as if the characters are being watched.

It makes for a very artistic experience that Tarkovsky would have certainly been proud of. However, some of the outcomes and elements of the story seemed inconclusive and confusing. What happens to the Viking who goes wild? Does he survive? I’ll give you a quarter if you tell me. The flaws of this film are quite minor, in my mind, and only detract slightly from its overall presentation. The Danish reviews were quite polarized with the film; some gave it 2/6, whereas others gave it 6/6. I wouldn’t give it a 6/6, but it is an excellent film. With a few touchups, it would be a masterpiece, but this film does indicate that Refn is a director who is capable of artistic integrity and cinematic immorality, and I, for one, can’t wait to see what else he has in store.