It wasn’t a bad awards show. There were very few disappointments, but also few surprises as far as the winners were concerned. A lot of phoneys and wannabe humorists, perhaps inspired by the relentless skewering by host Ricky Gervais. But overall, it was an enjoyable evening, and I really feel like those nominees who truly deserved to win, did. Except for Inception. No awards for Inception! What the heck?

Those wannabe humourists include one of my favourite actors: Robert De Niro. When recieving his honorary award, he made some “jokes” about deportation, to which I respond:

It made me happy that De Niro got the Cecil DeMille award, though, since he really is great. Was the Rocky & Bullwinkle clip supposed to remind him of how far he often mis-steps, though?

As most people predicted, The Social Network won Best Picture. As much as I like that movie, I personally didn’t want it to win, even though I knew it probably would. The only sad thing about this year’s Academy Awards is that there really is no hope of enjoying the surprise of which picture will win the night. Last year saw The Hurt Locker beat Avatar, which made for a very enjoyable underdog victory – compounded by the fact that it was the ex-wife of Avatar director James Cameron taking home the award that I’m sure he thought was going to be his. The Social Network has a lot of great qualities that are missing from Black Swan, Inception, True Grit and Animal Kingdom, that make it perfect Oscar bait for the best motion picture of 2010, though. So I say an early congratulations to the cast and crew of the film, especially David Fincher, who will also get his first Oscar just before March 2011, I’m sure.

I’m happy with all the actors who won. Natalie Portman earned her award justly. While I liked Nicole Kidman’s performance in Rabbit Hole, and her character more relatable than Portman’s, the power in the latter shocked many and I think everyone could understand the effort Natalie put into that performance. I don’t doubt that Colin Firth was good (I still haven’t seen The King’s Speech), and he has proven his diversity in comedies and dramas. The King’s Speech clearly allowed him to show that range. I’m happy that Christian Bale won, and I want to know if he can give a better speech at the Academy Awards than he did at the Globes. Melissa Leo was another deserving winner and it really made me smile when she gave her acceptance speech. Jacki Weaver, however, strikes me as a show stealer, and I unfortuately have not yet seen Animal Kingdom, but based on that one line in the trailer, “You’ve done some bad things, sweetie,” she makes me think she could win at the Oscars. Of course, it is a toss-up between her and Melissa Leo.

I’m glad The Kids Are All Right won. While not a great film in my eyes, it certainly was solid, and far better than the other films in that category (I haven’t seen Burlesque or The Tourist – as Ricky Gervais said “Who has?”). I would have liked to have seen Easy A, Due Date, Four Lions (especially) or even Rare Exports: A Christmas Tale take up the other nominee slots instead. Also, I did not see Annette Bening’s win coming. Not that she was bad – she was great in the film – but so was Julianne Moore. As they both played life partners in The Kids Are All Right, I thought that they both did a great job supporting eachothers’ performances. It’s like they were inseparable. One reason I was hoping Emma Stone would win, other than her being funny and cute, was so that it wouldn’t come down to this choice between Bening and Moore. At the Academy Awards, however, even if they are both nominated in two different categories, I doubt either of them will win. In fact, I’d put money on it. 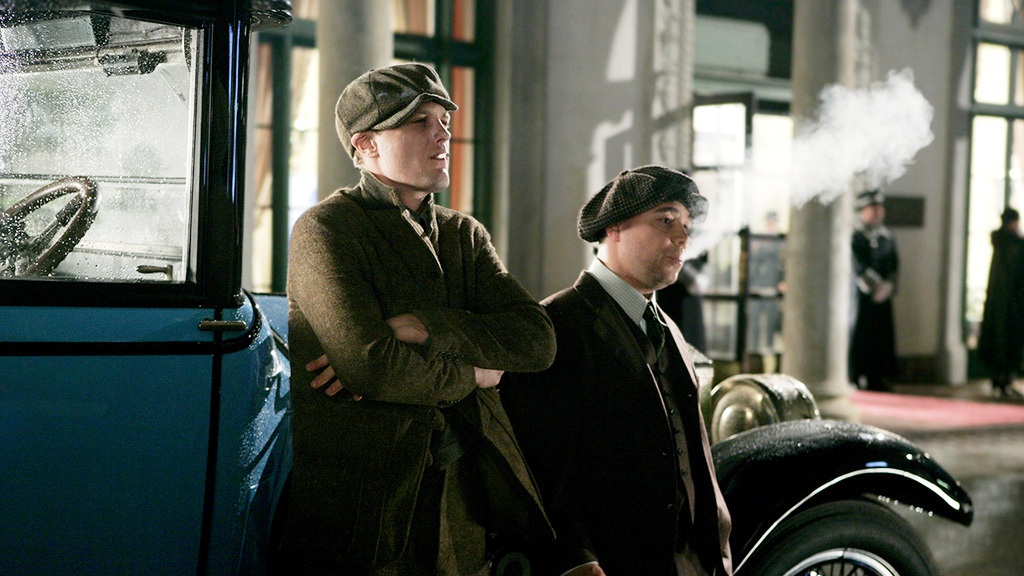 I am admittedly not as much of a television viewer as I was a few years ago. I guess the tables sort of turned when I started discovering the beauty of film and began to kind of shun TV. I usually watch shows or mini-series based on recommendations these days. I have not watched many of the shows that were nominated at the Globes (some with good reason, some out of my own ignorance) so I usually go with my old, tired gut as well as all the rabble I keep hearing about online when it came to my opinions on the television nominees. I was glad to see that Steve Buscemi and Boardwalk Empire itself got some recognition, as it’s one series that I follow regularly. Mad Men is another show I have gotten into and am working through its second season at the moment. I like it very much, but Boardwalk Empire is definitely my show of preference. I am also glad that my prediction of 30 Rock winning the award was wrong, because like I said, I just don’t get the show. But as I said, I don’t watch a lot of television, and if there’s one thing this year’s Golden Globes showed me, it’s that I need to start watching more. Also: Al Pacino, it’s nice to see you back in the saddle again!

There was a seriously hostile vibe running throughout this awards show. There was a lot of impatience, and a lot of nervous looks. I don’t think many people really cared about eachother’s successes or misfortunes. I really feel like they just wanted to get their award and get out of there. One thing I know for sure is that the only truly honest person at the awards show that evening was its host: Ricky Gervais. I hope he continues to serve as court jester for many evenings to come at the Golden Globes, Baftas, Emmys and the Oscars (but you and I both know, that it will never happen). I enjoyed that he didn’t hold anything back, and on an evening filled with self-congratulation, he wasn’t afraid to remind the celebrity’s in attendence that they aren’t perfect.

One final note about these awards that bothered me was the lack of authenticity, and it makes me dread seeing the list of 2011 Oscar nominations. As we all know, credit is usually assigned to a certain person or party based on politics and popularity. With Hollywood awards, it’s a no-brainer as to who should get credit for a film or a performance. While the Emmys have been praised by many, including the legendary George C. Scott, for their more honest approach to such matters, the Oscars refuse to do the same for some reason. Why? Doesn’t the Academy ever wonder why the number of late night viewers has dropped over the last decade? Doesn’t the Academy ever listen to all the bashing and badmouthing that people are firing at the Oscars online? Or does the Academy just choose to ignore all of that – the voice of its viewers? I mean, a movie can be both popular and an authentic choice, but we have never really seen that at the Oscars. There are never any surprise nominations, and the after watching the Globes, I feel like I’ve also watched all the movies and actors who will win at the Oscars too. The Academy always picks the most obvious films and performances to nominate. The great tragedy is that there are usually many, many films that are way better, way more affectionate and way more deserving of a nomination slot at the Oscars than the five (or ten, now) films that are chosen. That’s why I enjoy seeing movies like Black Swan and Inception getting made and nominated, because they show that new, original, interesting and unconventional films can still get made and garner recognition. Maybe there’s hope for the Oscars after all, thanks to the likes of Darren Aronofsky and Christopher Nolan. But I still feel like I know who’s going to be nominated and win in just about every category.

Well, maybe not. On a side note to January Jones: wow, you got balls, girl!