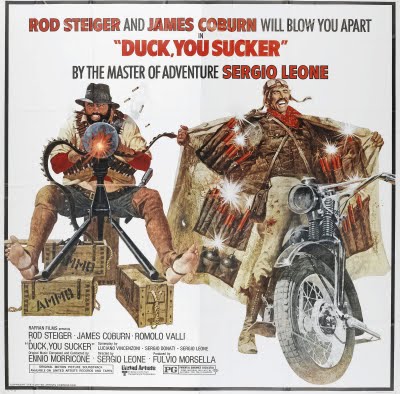 This quote is displayed onscreen on a title card at the beginning of Sergio Leone’s Duck, You Sucker and it perfectly summarizes the film, but it wound up being cut out of the original North American release for fear that it was too controversial. Obviously, American audiences did not particularly want to see a film begin with a quote from Chairman Mao during the middle of the Vietnam War. While the deletion of an opening title card does not make or break a film, it dos serve as a perfect indication of why Duck, You Sucker was doomed to be a commercial failure on its initial release and remain Sergio Leone’s most overlooked film. Leone only directed seven movies throughout the course of his lengthy career and while the majority of them are now considered all-time classics, Duck, You Sucker remains a strange anomaly in the director’s filmography. The film’s lack of success during its original release does stem a bit from the bizarre title, as Leone mistakenly thought the phrase “Duck, you sucker!” was a common North American expression. After failing to find an audience, distributors decided to pull Duck, You Sucker and re-release it under the title, A Fistful of Dynamite, but by then, it was too late. It was even briefly released in Europe under the title, Once Upon a Time… The Revolution, which has given off the mistaken impression that Leone intended this to be the second part of a trilogy, coming as it did between the release of Once Upon a Time in the West and Once Upon a Time in America. The film was also heavily cut and trimmed down from 157 minutes to 121, and it wasn’t until its DVD release in 2007 that the uncut original version of Duck, You Sucker finally saw the light of day. While I certainly wouldn’t rank this as Leone’s greatest film, it is still a very interesting and underrated piece of work.

As you can probably tell by the trailer and the poster art, Duck, Your Sucker was marketed as your typical light-hearted Italian spaghetti western romp. The film does have its fair share of humour, but it’s also a surprisingly dark and sad film at times and contains a lot more serious drama than you will find in Leone’s “Man With No Name” trilogy. Leone never even wanted to direct Duck, You Sucker to begin with since he was tired of making spaghetti westerns, but he eventually gave in to pressure since the film’s two stars would not do the picture unless Leone was at the helm. The setting is Mexico in 1913 during the time of the Mexican Revolution. The two main characters are Juan Miranda (Rod Steiger), a Mexican outlaw bandit, and John Mallory (James Coburn), a former Irish Republican revolutionary who’s a wanted fugitive by the British. The two men cross paths after Juan and his gang rob a stagecoach. John immediately establishes himself as an explosives expert who can successfully blow up anything without doing any personal damage to himself, so Juan decides to recruit his services to help him rob a very prominent bank in Mesa Verde. Juan is a character who only cares about personal gain for himself and his family, and has no political aspirations or interest in the Revolution. John decides to go along with Juan’s plan to rob the bank, but he engineers it so that the incident winds up turning Juan into an unwitting revolutionary hero. However, a disastrous turn of events forces both men to re-examine their personal philosophies about life. The title, Duck, You Sucker, happens to be John’s catchphrase, and whenever you hear him say those words, you know something is going to blow up real good! The film establishes this by giving John a typically great Sergio Leone introduction scene.

It’s worth noting that it takes nearly 25 minutes for John’s introductory scene to finally take place. On paper, this plot sounds relatively simple and I’m sure most directors would have told this story in under two hours. However, if there’s one thing that Sergio Leone is known for, it’s taking his sweet-ass time. At 157 minutes, the uncut version of Duck, You Sucker may be shorter than The Good, the Bad and the Ugly, Once Upon a Time in the West and Once Upon a Time in America, but I have to concede that it sometimes feels like a longer movie. The film does move at a typically slow and deliberate pace, and while it does drag at certain points, most of the time it is a joy to watch. Leone is one of those rare directors where you can say that his scenes of nothing happening are more exciting to watch than most other directors’ scenes of sound and fury. The heavily trimmed 121-minute version of Duck, You Sucker may be a tighter, more fast-paced film, but it’s unlikely that its full impact would have been received. While Once Upon a Time in the West took the conventions of the American western and turned them on their head, Duck, You Sucker seeks to do the same thing to the concept of the romantic revolutionary hero. Like the quote from Chairman Mao stated, the revolution is an act of violence, so even if one takes place with heroic intentions in mind, there will always be personal consequences. The two main characters in this film both assume the role of revolutionary heroes, but at great personal cost to themselves and others. I think the most interesting element of Duck, You Sucker is that it contains a lot more character development than usual for a Leone spaghetti western. Juan and John make a very interesting buddy combination as they both force each other to ponder whether or not they are taking the right path in life. John inspires Juan to become less self-absorbed and more idealistic, but Juan also helps John realize that an idealistic revolutionary philosophy can have terrible consequences. The film contains numerous flashbacks to John’s days as a revolutionary in Ireland, which shows that his current friendship with Juan may give him a chance at redemption for a friendship gone bad.

As you may have noticed from the preceding clips, Duck, You Sucker contains one of the more unique, hypnotic music scores from legendary composer Ennio Morricone. This is definitely one of the more underrated scores of Morricone’s career and one of those rare cases when a film’s music can single-handedly keep the audience involved in a slowly paced scene that might otherwise seem draggy and boring. In spite of its slower pace, however, Duck, You Sucker still does deliver in the action department. Leone provides a lot of memorable and spectacular setpieces, which include the destruction of a mammoth bridge, and a non-stop tracking shot during a battle scene which showcases numerous soliders gunning down innocent people, execution-style. James Coburn and Rod Steiger also do a very good job at carrying the film along, and while one can debate the believability of their respective Irish and Mexican accents, they both successfully turn John and Juan into likable, fully fleshed-out characters who have a lot more pathos than you’d expect to find in a spaghetti western. Admittedly, I’d have to say that Duck, You Sucker is my least favourite Sergio Leone film, but that’s like complaining about Jackie Brown being my least favourite Quentin Tarantino film or Insomnia being my least favourtie effort by Christopher Nolan. This is just a case of a director’s body of work being so consistently great that even his weakest film is still a very good effort. Duck, You Sucker probably isn’t to everyone’s taste as its deliberate pace and often downbeat tone might make it a bit of jolt for those who are expecting something as lightweight as Leone’s previous spaghetti westerns. However, Sergio Leone is a director where you don’t just sit and watch his films, you absorb and savour them while they’re happening, and Duck, You Sucker contains many memorable moments that deserve to be savoured.