Runstedler’s DVD Pick of the Month: Life without Death

Posted on February 23, 2011 by curtisrunstedler 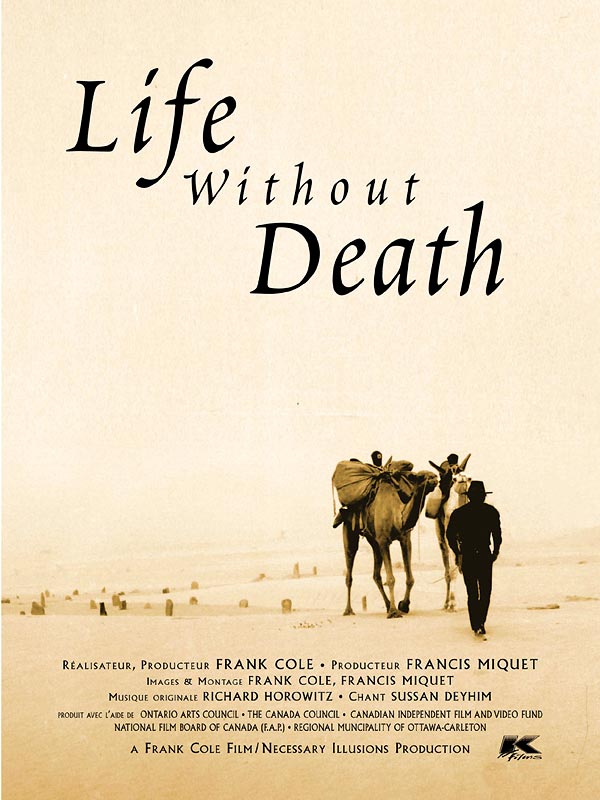 I watched this Frank Cole film with Grant a few months back at the National Archives and it still haunts me. It’s a Canadian documentary about a relatively young man who decides to cross the Sahara Desert alone and despite the odds, he succeeds in doing so. After his beloved grandfather dies, he becomes fixated on crossing the Sahara, and what ensues is harrowing exercise campaign and a sullen narrative that provides a chilling introspective into the life of this extraordinary but troubled man.

It’s a very existential film, questioning our place in the universe, and as you watch it, you question Cole’s motives for crossing the desert. To me, it seemed like he had a death wish. He didn’t care whether or not he made it through the desert or not. He believed that he could conquer death, and he trained for it by exerting himself to the limits of his physical and psychological abilities and lived to tell the tale. Whether he’s brilliant, insane, or a little bit of both, doesn’t really matter. What matters is that he was and will always be a brilliant filmmaker. The cinematography of the film is gorgeous, with vast panoramas articulated by Cole’s dolorous monologues.

As he travels from the Atlantic Ocean to the Red Sea, embarking on a 7100 kilometre trek, you feel the weight under his shoulders. I was utterly shaken and stirred after watching this, but it’s such a passionate and meaningful film that I couldn’t draw my eyes away for a second. Aside from being a compelling psychological journey, it’s also a fascinating artistic experience. Cole’s audacity and philosophical outlook is matched only by his professional filmmaking abilities. Cole died in 2000 in Mali when he ventured back to the Sahara for another expedition. His legacy as an extraordinary Ottawa filmmaker remains with Life without Death. He managed to live that life without death, if only for a short time.