Books That Should Be Movies: March Violets 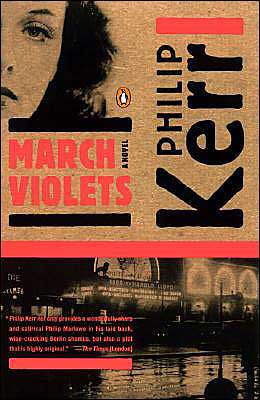 Alright, alright. I will be the first to admit that it’s a pretty awful title to anyone who hasn’t studied the history of the Nazi Party and World War II. That is true. The average testosterone driven male might avoid this movie on general principle..much like how I avoided Resevoir Dogs for about three years because I don’t like dogs. That said, Phillip Kerr’s March Violets could easily be the start of one of the best historical fiction franchises in Hollywood’s history. It has everything a good movie should… a grumpy but ultimately likeable anti-hero, a strong female character in the beautiful devastating movie star and a story that marries both good action with a real dome-scratching mystery.

March Violets is the first of an awesome series of private investigator novels that take place in Germany during the Nazi era. The story centers around Bernie Gunther, an ex-Kripo investigator who stepped down from a promising career in the police force when he saw the rise of the party in the ranks and, in particular, the rise of the SS. Bernie, who never actually joins the Nazi party and, in typical noir-hero style, has no problem telling people bigger then he is exactly what he thinks of them, is not exactly a hero of the Fatherland. He plays to their rules but like most people in Germany in that era, he learned to bite his lip when people talk about the glory of the “Party”. Unless he’s drinking.

Bernie has a hard jaw and fast fists. He eeks out a living as a private investigator who specializes in finding dead bodies and missing people. Yes, most of his clients are Jews, but in Germany in those days who else is likely to go missing? Bernie gives the grieving closure but is a practical man. He does require to be paid. Unlike some of the others running about, though, he is honorable and he doesn’t over charge. One night after getting a little sauced with the father of his secretary at her wedding to a Nazi flyboy (pilot/spy) Bernie is accosted by the driver of a wealthy German industrialist who hires him on site to give a proper investigation into the murder of his daughter (a good German mother) his son-in-law (a rising Nazi star) and the theft of a priceless diamond necklace. This begins Bernie’s descent into the hell that was party politics at the time.

As a mystery, this novel is among the best. It is written by a master and it will keep you guessing until the absolute very end. For the history buffs, Gunther finds himself moving through characters both real (like Himmler and Goering) to some beautifully colored creations of the time. For mood, you just can’t beat a country under a tyrant’s boot where everyone loves the Fatherland and is too scared to say anything but how much they do. Kerr nails the ambiance and the moral ambiguity of Berlin under the Nazis…all of his characters deal with their inate goodness and the knowledge that they are in NAZI Germany in different but noticeable ways. And he moves Bernie through historical events with elan and grace. Our hero does the nightclubs, the corrupt shops that gouge Jewish customers out of everything, even the movie star who is the Fuhrer’s favorite and as such lives in duplicitous luxury and is even in the stands watching Hitler when Jessie Owens stomps all over the idea of racial supremacy.

But this isn’t a history book, nor will this be a good NFC film. This is a noir novel and it knows its audience. It doesn’t take long for Bernie to find the necklace and discover that there were other things in the young Nazi’s safe… things that senior party members are much more interested in. Bernie realizes that the SS are investigating the death of the young couple too, that they are one step ahead of him and that the SS are not playing fair. Bernie keeps coming across dead witnesses. Dead leads. It isn’t long before the guns are pulled, the fists are flying and Bernie ends up, after a few days of torture, being sent to Dachau.

Yes, yes, I know. At the risk of a spoiler I will end on this…this movie should begin a la Memento, with a black and white scene of our beloved, rumpled private investigator walking into the cabin of the red headed man in Dachau and nodding and closing the door behind him, and then have it move backwards from there. But then, I know little of movies. There are times in life when you read a book that the author obviously wrote because he wants to shop the idea out to Hollywood and then there are books that you read and you think… my GOD, if Hollywood put even a B-list director with a mid-range budget on this, it could pack the theaters and make careers. March Violets, by Phillip Kerr. Hollywood? You listening? There are six other books in the series and they only get better.