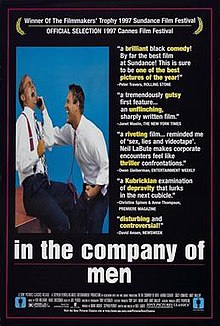 Since it is Aaron Eckhart’s birthday today and his latest film, Battle: Los Angeles, is opening in multiplexes this weekend, I thought it only appropriate to pay tribute to the film that originally put Mr. Eckhart on the map. It’s always a satisfying feeling when you are blown away by the performance of an unknown actor in a low-budget independent film and start spouting his name to everyone, and then said actor actually goes on to find huge success. During my first week at university, I remember being invited to a screening at the famous Carlton Cinema in Toronto to see a little film called In the Company of Men. The movie was written and directed by a playwright named Neil LaBute and was adapted from his own stage play. It was shot in two weeks on a budget of only $25,000 and it certainly looked it, but certain elements of the film just blew me away. I had never seen a movie villain anything like the character of Chad, who was played by this amazing new actor named Aaron Eckhart. Chad is a very unique screen villain in that he technically never does anything illegal, but you would be hard-pressed to find a character that was more evil and cold-hearted than him. In the Company of Men received critical acclaim when it originally opened, but even though Aaron Eckhart has gone on to bigger things, the film itself has kind of faded into obscurity over the years. However, it definitely demands rediscovery as few films have ever been more uncompromising and willing to go so far in their depiction of deliberate emotional cruelty.

The two main characters in In the Company of Men are Chad (Aaron Eckhart) and Howard (Matt Malloy), two frustrated employees of an unnamed corporation who have each just come off of being unceremoniously dumped by their girlfriends. Their experiences have made them both extremely bitter about women in general, so Chad dreams up a misogynist scheme which he hopes will restore pride to the male race. The two men have been temporarily transferred to a branch office in another city for six weeks, so Chad thinks it would be a fun idea to find a vulnerable woman who hasn’t had much luck with relationships and take her on a very cruel emotional roller coaster ride. Both Chad and Howard will take turns dating and romancing her and treating her as nicely as possible to build up her self-esteem, but when their six-week assignment in the city is finished, they will both simultaneously dump her, head back home and never contact her again. Chad hopes to leave the woman so emotionally devastated that “she’ll be reaching for the sleeping pills within a week”. Chad finds the perfect target at their workplace when he meets a young deaf woman named Christine (Stacy Edwards). Needless to say, her disability has made her very insecure around men, so she is quite overjoyed when two new guys suddenly start expressing an interest in her. Chad’s manipulative personality is truly put on display here as he acts like the nicest guy imaginable when he’s around Christine, but cruelly pokes fun of her disability behind her back.

As the weeks go by, Howard starts to feel incredibly guilty about what he and Chad are doing, and even develops genuine feelings for Christine. However, since Chad is a much more charismatic individual and Howard is kind of a boring drip, Christine is very enamoured with Chad and has little interest in the guy who actually does like her. Even though this sounds like a pretty simple story on paper, Neil Labute’s screenplay is a lot more complex than you’d think and manages to spring a couple of unexpected twists and surprises on the viewer. Few films can boast about having a more genuinely evil and cruel lead character than In the Company of Men. While Two-Face may be the most famous villain that Aaron Eckhart has ever played in his career, he looks like a complete pussycat next to Chad! However, even though Chad is clearly a sociopath, he is not presented as a one-dimensional bad guy and it’s an incredibly tricky role to pull off. It’s hard enough for an actor to deliver a convincing performance as the character they’re playing, but it’s twice as difficult to play a character who has to be a convincing actor himself! A great deal of Chad’s scenes involve him pretending to be a genuinely sweet and charming guy in front of Christine and it’s very easy to believe that she wouldn’t see through him and could actually believe Chad really likes her. In fact, Eckhart is so convincing at portraying this side of Chad that you even start to wonder if he is developing a conscience and has real feelings for Christine. Of course, Eckhart is also brilliant at showcasing the vile, manipulative side of Chad. Even though In the Company of Men covers some pretty uncomfortable and painful material, it also effectively functions as a dark comedy at times and Chad’s hilariously vindictive nature does provide a lot of laughs.

If I had written this column earlier, Eckhart’s performance probably would have made my “Ten Performances from ‘Robin’s Underrated Gems’ That Deserved Oscar Nominations” list. However, he also gets solid support from his other two main cast members, as Matt Malloy does a very effective job at showcasing Howard’s internal conflict, and Stacy Edwards is so convincing as Christine that I was absolutely shocked when I found out she wasn’t really deaf. While neither of them have attained the success of Aaron Eckhart, their work in this film has let them find pretty steady work as character actors ever since. It goes without saying that Neil Labute’s body of work since In the Company of Men has been pretty spotty and it’s hard to believe that the same man who made this terrific film could be responsible for the infamous Wicker Man remake, which may be the biggest unintentional comedy of the past decade. Given that In the Company of Men was originally based on a stage play, Labute’s direction here is a bit static in places, but the quality of the writing and acting more than make up for it, and his screenplay really should have garnered an Oscar nomination that year. In the Company of Men is definitely not a film for everyone and in spite of how well-made it may be, it covers material that may be too emotionally painful for some viewers to handle. The narrative does not follow typical Hollywood conventions and has the courage not to cop out or let the viewer off easy. In spite of its critical acclaim, it’s probably not surprising that In the Company of Men did not catch on with mainstream audiences. Most Aaron Eckhart fans I encounter these days have never even heard of this film, even though it got him his big break and features what still may be his greatest performance. Even though I’ve constantly pointed out how evil and cruel the character of Chad is, the sad truth is that many people just like him can be found in everyday life, and I’m sure most of us had our own encounters with someone as cold-hearted as Chad. In the Company of Men just happens to be one of the very few films that is brave enough to put a person like that onscreen.