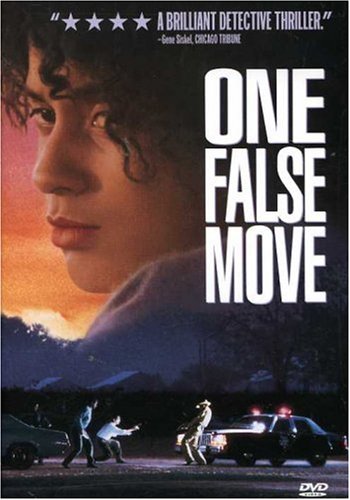 I remember back when Billy Bob Thornton starred in and received a “Best Adapted Screenplay” Oscar for Sling Blade and some were acting like he was this unknown newcomer who just popped up out of nowhere. The truth of the matter is that Thornton had been acting steadily for nearly a decade at that point, and also happened to star in and co-write one of the very best crime dramas of the 1990s. “Robin’s Underrated Gems” has featured a number of films that received immense critical praise upon their initial release, but never really caught on with mainstream audiences and pretty much faded into obscurity. One of them was the 1994 film noir picture, The Last Seduction, which was initially sent straight to cable by its distributor and only secured a theatrical release after receiving rave reviews from critics. It appears that distributors at that time just did not have a lot of faith in modernized film noir stories because the same fate nearly befell a low-budget 1992 crime thriller called One False Movie, which was also nearly vanquished into direct-to-video oblivion. Once again, it was great word-of-mouth and tremendous critical praise which got the distributors to change their mind and release it into theaters. Just how immense was this critical praise? Well, how about the fact that Gene Siskel ranked it #1 on his “Ten Best” list that year and Roger Ebert ranked it #2?!

On paper, One False Move may not seem like much to write home about, but it’s amazing how much this story winds up surprising and absorbing you. The film opens in Los Angeles and instantly establishes that it’s not going to be a traditional crime picture after an incredibly harrowing first ten minutes where six people are brutally murdered in a cold, detached fashion. The murderers are Ray Malcolm (Billy Bob Thornton), a violent, hot-tempered redneck, and Pluto (Michael Beach), an extremely intelligent, reserved psychopath with a blank stare that can scare the crap out of you. They are accompanied by a young black woman named Fantasia (Cynda Williams), who seems to have great remorse about what she’s involved in. The trio steal over $15,000 in cash and a stash of cocaine and go on the run. Two LAPD cops, Cole (Jim Metzler) and McFeely (Earl Billings), are assigned to the case and have reason to believe that the criminals are heading to the small town of Star City, Arkansas, which is the original birthplace of Ray and Fantasia. Cole and McFeely fly to Star City and meet up with the local police chief, Dale “Hurricane” Dixon (Bill Paxton). Hurricane is the working definition of a “good ol’ boy” who is mighty excited to have two cops from the big city in his town. Since police work in Star City is always dull and unexciting, he shows great enthusiasm about the possibility of getting involved in a major case involving murder and drugs. However, Hurricane also seems to suffer from A.D.D. and doesn’t realize that this type of case is potentially dangerous and way over his head.

It’s inevitable that One False Move is eventually going to build up to showdown between Hurricane and the criminals, but the film is a much more multi-layered and complex story than it seems and goes in some every unexpected directions. The script here was penned by Billy Bob Thornton and Tom Epperson, who would collaborate together to write several produced screenplays, including Sam Raimi’s The Gift. Even though Thornton wouldn’t get Academy Award recognition until Sling Blade, his screenplay for One False Move really should have garnered a nomination as its a case study in how to write a compelling, well-structured crime thriller with very interesting three-dimensional characters. The characters drive the plot here instead of the other way around. Most thrillers would build to a standard “good guys vs. bad guys” shootout as their climax, but while One False Move does just that, it also delivers a surprise revelation about Hurricane that causes the film’s concluding events to be seen in an entirely different light. While Hurricane Dixon could have easily devolved into a cartoonish stereotype, he becomes an incredibly fascinating protagonist who means very well and is impossible to dislike, but is also a deeply flawed person with some skeletons in his closet. The character of Fantasia is also very well-written as the screenplay could have just treated her as a standard “battered spouse” victim, but she turns out to be a very complex individual who does capture the audience’s sympathy, but is also capable of doing unforgivable things. One False Move was directed by Carl Franklin, who has mostly done forgettable Hollywood thrillers like High Crimes and Out of Time since he made this film, but his pacing here is excellent and he does a tremendous job at generating tension, especially during this climactic montage that builds up to the final showdown, High Noon-style.

The performances are impressive all around, with Billy Bob Thornton and Michael Beach making a particularly terrifying pair of villains. However, the film completely belongs to Bill Paxton, who delivers what is probably still his greatest performance to date. This is the role where Paxton officially went from being the funny guy in Aliens to gaining credibility as a serious actor. Like I stated earlier, the character of Hurricane is a delicate balancing act since he seems to fit the typical redneck sheriff stereotype, but Paxton keeps him believable and real. It’s easy to laugh at Hurricane’s naive “good ol’ boy” persona at first, but during a scene where he overhears the LAPD cops poking fun of him behind his back, Paxton’s hurt expression really makes you feel for the guy. One False Move is the kind of multi-dimensional thriller that just isn’t made in Hollywood any more, which is probably why it remains underrated and overlooked. As a footnote, you may think it’s ridiculous that Hollywood loves to remake foreign films like Let the Right One In and The Girl With the Dragon Tattoo only a few years after they were released, but get a load of this ancedote. After One False Move became a critical hit, Billy Bob Thornton actually received an offer from Columbia Tristar, who wanted to buy his script and remake the movie with bigger stars! Thankfully, he turned them down. You may wonder how a film that topped Siskel & Ebert’s “Ten Best” list could be considered underrated, but I measure the term “underrated” by how many people I encounter who’ve heard of the film. Unfortunately, One False Move does not pass that test with flying colours, but hey, that’s with this column is for, isn’t it?