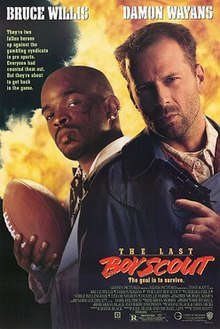 This week, we recorded a Shouts From the Back Row podcast about what we consider to be our most quotable movies. One of my selections was The Last Boy Scout, a film that is loaded with great quotes from beginning to end, but sadly, if you were to recite them in an everyday conversation, most people would not recognize them. This is one of those cases where I just cannot figure out why a movie did not catch on with a larger audience. This film was specifically designed for people who love action movies and caters to their tastes so well that I am surprised The Last Boy Scout was not a bigger success. Don’t get me wrong, it did okay at the box office and I’m sure Bruce Willis considered it a great improvement over his previous film: the infamous flop, Hudson Hawk. However, it certainly wasn’t a blockbuster, and it’s likely that the studio’s decision to release a cynical, ultra-violent action-comedy in theaters during the Christmas season might have been ill-advised. The screenplay for The Last Boy Scout was written by Shane Black, who became the most sought-after action screenwriter in Hollywood after his script for Lethal Weapon became a huge success. Black became the first screenwriter to break the $1 million barrier for a single script after he sold The Last Boy Scout to Joel Silver and Warner Bros. for a record $1.75 million (he would eventually shatter his own record when he sold his screenplay for The Long Kiss Goodnight for $4 million, a record that still stands today). To be fair, the plotlines in Black’s screenplays are usually nothing to write home about and would probably result in a routine, by-the-numbers action film in the hands of a lesser writer. However, what made Black such a special screenwriter was his gift for witty dialogue, hilariously quirky characterizations and clever cliffhanger situations, and that’s what makes The Last Boy Scout such a treat to watch.

Shane Black is known for being a big fan of old-school film noir detective stories and, at its heart, that’s exactly what The Last Boy Scout is, even though it just happens to contain a plethora of action scenes. The protagonist is a cynical, burned-out private investigator named Joe Hallenbeck (Bruce Willis), who is shown drunk and passed out in his car in his introductory scene and doesn’t even wake up when a group of kids drop a dead squirrel on him. Hallenbeck’s home life is a mess as his wife Sarah (Chelsea Field) is cheating on him with his best friend, and his 13-year old daughter Darian (Danielle Harris) hates his guts and uses enough profanity to make Richard Pryor blush. His soon-to-be partner is Jimmy Dix (Damon Wayans), a former pro football quarterback who was banned from the league on gambling and drug possession charges. Their two paths cross when Hallenbeck is hired to work as a bodyguard for Jimmy’s stripper girlfriend Cory (Halle Berry, in one of her earliest roles), who fears that her life is danger. It turns out Cory was involved in something much bigger than they imagined as she is violently murdered in a professional hit. Naturally, Hallenbeck and Jimmy wind up working together as partners in an attempt to solve the case and, despite hating each other at first, soon develop a deep bond and friendship. On paper, The Last Boy Scout may not sound like anything special, but Shane Black really elevates the material with his sharp writing and the interplay between the two mismatched buddies is often hilarious.

The Last Boy Scout was directed by Tony Scott, who could make a movie like this in his sleep and employs his typically flashy visual trademarks and kinetic, choppy editing. The action sequences are entertaining, but it’s the character interplay, dialogue and some surprisingly clever plotting that really make the movie. Ironically, Black’s original draft of the screenplay, which earned him his hefty $1.75 million sum, was 166 pages long and a lot more bloated and convoluted than the finished film. It still had the great dialogue and character interaction, but it also dragged on way too long and contained more climaxes than a porn film. That version of the script was condensed and trimmed down significantly, so that the final cut of the film runs a breezy, fast-paced 105 minutes. While there are rumours that Black was unhappy with some of the cuts made to his script, it does make for a much stronger movie. All things considered, the final film does a fairly solid job at moving its complicated plot along and finds a lot of ingenious ways to get its protagonists into trouble. Black has always been particularly good at devising clever cliffhanger situations for his characters, and The Last Boy Scout contains about a half dozen scenes where the heroes are in a seemingly inescapable situation, but are able to use their wits to get themselves out of it. In this scene, Hallenback and Jimmy outsmart a pair of bad guys who are holding them at gunpoint and also deliver some priceless one-liners in the process (“Shit, we’re being beat up the inventor of Scrabble”).

While there have been numerous mismatched buddy combos in the annals of cinema, the team of Joe Hallenbeck and Jimmy Dix still remains one of my personal favourites. This is an absolutely perfect tailor-made role for Bruce Willis and he performs it with gusto, and while I generally don’t have much use for the whole Wayans family at all, Damon Wayans is actually quite good here and has terrific chemistry with Willis. The two characters have a ton of hilarious and quotable dialogue passages, but one of the most eye-opening has to be this exchange about Jimmy’s pants. Does this sound a little familiar to you?

Yep, that sounds a lot like the five-dollar milkshake exchange between John Travolta and Uma Thurman in Pulp Fiction, doesn’t it? As much as I love Quentin Tarantino, I have to concede that Shane Black beat to the punch there by three years. Anyway, Black’s scripts are also known for having wonderfully reprehensible villains and The Last Boy Scout is no exception. While corrupt football owner Sheldon Marcone (Noble Willingham) is the main bad guys of the piece, the film is completely stolen by his henchman, Milo (Taylor Negron). I consider Milo to be one of the more underrated henchman of all time, as he’s such a delightfully weaselly, condescending character (who always calls Joe “Joseph” and Jimmy “James”), and Taylor Negron makes such a big impression in the role that it’s easy to forget that he doesn’t even appear onscreen until an hour into the film. A bad guy “honourable mention” should also go to Kim Coates’ role as Chet, who’s only in the film for two scenes, but receives such a great comeuppance that I had to include it on my “Top 10 Most Satisfying Movie Villain Death Scenes” list.

Unfortunately, The Last Boy Scout is a breed of action film you just don’t see any more. While many of the buddy action-comedies that were released in the eighties and early nineties were formulaic and filled with cliches, they had a certain likability that always made them a lot of fun. The Last Boy Scout is also very formulaic and contains virtually every cliche of the genre, but let’s not forget that Shane Black himself helped popularize a lot of these cliches in the first place when he wrote Lethal Weapon, so he knows to utilize them and find ways to keep them fresh and entertaining. So many of today’s action films are incredibly mechanical and lack the wit, cynicism and energy that you’d get from a writer like Black. That’s why I was incredibly happy to hear that he had been hired to direct the upcoming Iron Man 3 and I really hope he gets to make a lot of contributions at the script stage. Anyway, The Last Boy Scout did not exactly receive glowing reviews when it was originally released and I know that some critics were just disgusted with the idea that a screenwriter could be paid over $1 million for such a violent, profane script. The same criticisms were levied at The Long Kiss Goodnight, and Black also had the misfortune of being a co-writer on one the most unfairly maligned flops of all time, Last Action Hero. From my personal point of view, if a writer is paid a large amount of money for a spec script, the only thing I care about at all is if the script entertains the hell out of me and The Last Boy Scout certainly does that. Like I said before, it remains one of my most quotable movies, but I think it says a lot about the strength of the writing that I can quote a line from the film to someone who hasn’t seen it, and they’ll usually still laugh. The Last Boy Scout delivers the goods for its target audience so well that if you’re an action fan and you haven’t yet seen it, you owe it to yourself to change that right away!