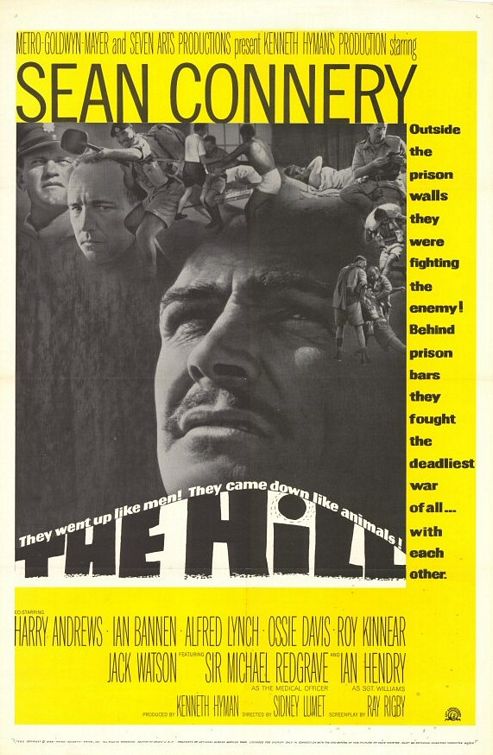 The film world lost one of its all-time greats when legendary director Sidney Lumet passed away last weekend. In tribute, I wrote a column about my “Top 10 Favourite Sidney Lumet Films” and remarked that some of my selections were worthy of being the subject of future editions of “Robin’s Underrated Gems”. Because Lumet was responsible for such renowned classics as 12 Angry Men, Serpico, Dog Day Afternoon and Network, there is a wide selection of great movies in his filmography that have been somewhat lost in the shuffle over the years and have never gotten the credit they deserve. One of the most obscure of these titles is a 1965 British military drama called The Hill, which may seem like an odd choice of a project for Sidney Lumet to direct, yet still contains many of the attributes of his best work. Since making his directorial debut in 1957 with 12 Angry Men, Lumet proved himself to be a director who loved the challenge of setting an entire movie in one very limited and confined location. 12 Angry Men almost never left the confines of a claustrophobic jury room and The Hill follows this same pattern by not allowing the audience to exit one of the most oppressive, unpleasant environments ever featured in a film. On the all-time list of movies which make the viewer very thankful that they are not the characters onscreen, The Hill probably ranks somewhere near the very top. However, while this is definitely not one of the biggest “feel-good” movies of all time, it’s still an undeniably powerful and compelling piece of cinema.

Based on a stage play by Ray Rigby and R.S. Allen, The Hill takes place entirely in a British military detention camp in the North African desert during World War II. This is where British soldiers who have been convicted of such offenses as desertion, theft, insubordination and assault are sent to be punished by forcing them to undergo a series of repetitive military drills in the blazing desert sun. It’s rumoured that some soldiers actually prefer to be sent to this camp in order avoid seeing action in the war, but the Regimental Sergeant Major Wilson (Harry Andrews) is greatly offended by this notion and wishes to create an environment so hellacious that his prisoners are practically begging to be sent back to the front lines. The most miserable form of punishment is “the hill” of the title, a giant man-made creation in the middle of the camp constructed out of sand and rocks, which soldiers are forced to repeatedly climb up and down with large packs on their shoulders in the unbearable heat. At the beginning of the story, five prisoners have been sent to the camp for various offenses. They are Roberts (Sean Connery), King (Ossie Davis), Bartlett (Roy Kinnear), McGrath (Jack Watson) and Stevens (Alfred Lynch). A new Staff Sergeant named Williams (Ian Hendry) is assigned the task of disciplining them and attempting to mold them into good soldiers, but he proves to be an incredibly sadistic brute who gets off on the cruel treatment of his prisoners. In this scene, the soldiers go through medical inspection to determine if they are all fit for punishment, but this is done in a very half-assed fashion and it’s apparent that everyone is doomed to receive the same brutal treatment, no matter what.

Stevens proves to be the weakest member of the group, and it’s obvious that he’s barely even fit to be in the military at all, let alone running non-stop drills in a prison camp. Williams takes particular pleasure in punishing Stevens, and despite numerous warnings about problems with Stevens’ physical and mental health, Williams refuses to let up on him. Stevens eventually keels over and dies from exhaustion, and while RSM Wilson never really approved of Williams’ actions, he decides not to punish him and tries to sweep Stevens’ death under the rug. While most of the other prisoners are too terrified to do anything, Roberts refuses to let it slide and makes an effort to stage a revolt so that Williams can face justice and their sadistic treatment can come to an end. Like I said before, The Hill is an incredibly powerful piece of drama, but it’s definitely not a pleasant experience. This prison camp depicted in this film is an incredibly suffocating place, and Lumet never provides the viewer with the relief of getting to go outside its walls. Even though the majority of motion pictures had converted to colour photography by the 1960s, Lumet still preferred to shoot the majority of his early films in black-and-white and that greatly adds to The Hill‘s stark atmosphere. This could easily be considered one of the sweatiest movies of all time as the heat during the filming of The Hill was just as bad as it’s depicted onscreen and the actors had to go through almost as much hell as their characters. During one of the sequences where the soldiers are forced to repeatedly climb up and down the hill, Lumet presents the action in long, unbroken takes so that you know the actors are actually performing this drill. It’s likely that this oppressive environment greatly added to the their performances as the amount of anger and intensity they display in some scenes is astonishing.

At the time The Hill was made, Sean Connery was in the midst of playing James Bond and was one of the biggest movie stars in the world. Connery was always paranoid about getting himself typecast as 007, so it was probably a wise career movie to take a break in between Bond pictures to act in a very challenging and unglamorous film like The Hill, and he winds up delivering one of his all-time greatest performances. The acting is excellent all across the board and the film is a terrific showcase for such fine underrated British character actors like Harry Andrews, Ian Hendry and Roy Kinnear. Ossie Davis fans definitely owe it to themselves to check out his performance here, as he gets what is probably the standout acting moment in the film when he decides to protest by quitting the Army and ripping off his uniform. If there’s one thing Sidney Lumet has always done well in his career, it’s scenes where actors are yelling at each other, and while those scenes are performed with an amazing amount of intensity in The Hill, they are also performed in very thick British accents. Some viewers might be taken aback and have a hard time understanding what the characters are saying, so (on a first viewing, at least) watching The Hill with the closed captioning turned on might be advised. It goes without saying that this is not going to be a movie for every taste. The Hill is almost unrelentingly grim and even though it presents a story about underdogs fighting against the system, it is not particularly inspirational and delivers an ending that some viewers might find abrupt, but is also brilliantly ironic. However, no one ever said that all great cinema had to be roses and sunshine, and it’s undeniable that The Hill is a brilliantly acted and directed piece of work that has remained criminally underrated for a long time, but deserves another look.