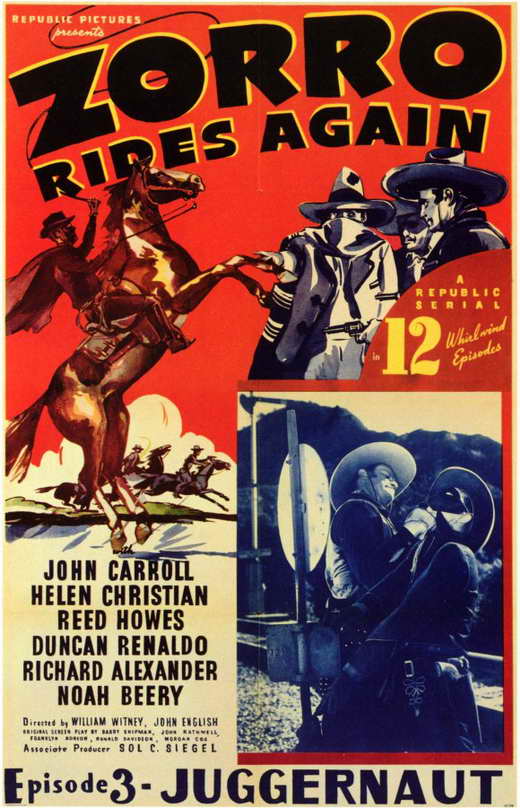 Part of the fun of serials are the cliff hangers. At the end of each episode we see our hero in mortal peril only to see him narrowly escape at the beginning of the next one. Cliff hangers are about as old as stories themselves. The story of The Arabian Nights is all about cliff hangers, as Shaharazad uses the technique to keep herself alive. If you read Husain Haddawy’s translation, you learn exactly how effective they can be as a tool.

I have noticed three different techniques that film serial makers use to keep bringing people back to the theatres. The first one I call, “The Last Minute Save”.  In the “Last Minute Save”, you’ll have Flash Gordon fall off a cliff to his certain doom at the end of one episode and land on a ledge at the beginning of the next. The next type of cliff hanger I call, “Slight of Hand”. Here you’ll see the plane, The Green Hornet is in, crash and explode. The next episode they will show you the scene inside the airplane where The Hornet bails out in the nick of time. The third technique I call, “You Cheating Bastards!” With this cliff hanger the writers don’t bother thinking of a way out, or the director just wants to punch up an otherwise lame serial. Here, you actually see Crash Corrigan get trampled to death by horses, the next episode starts with different footage of horses running around Crash, instead of over him.

As you watch serials you notice that one will favour one technique over another and poorer quality serials will cheat more than better ones. (I’m looking at you, Undersea Kingdom)

Basic Story Line
Set in 1937, Zorro’s grandson, James Vega, returns to the family home to help build a railroad. A local gang has been employed to stop the construction. James takes on his grandfather’s mantle and fights back.

Unlike Flash Gordon and The Green Hornet, Zorro had a well established history as a character and was rooted in the familiar genre of the Western. This gave Zorro Rides Again an advantage over some of its fellow serials, and it shows.

The character of Zorro, first appeared in 1919 as a print serial, written by Johnston McCulley and published in All Story Weekly Magazine. He was then popularized by Douglas Fairbanks’ film portrayal. Since then he has entered the popular consciousness through, more stories, films, television, cartoons, novels, halloween costumes, and yes, cliff hanger film serials. Even if you have never seen a single Zorro television episode or movie, you know the name and you have an image of the man.

At its heart, Zorro Rides Again is a Western, and Americans love their mythology of the Old West. It’s about individuals taming the wild lawlessness. Unlike Canada, whose Western Mythology involves a lot of government and bureaucracy, the Americans like their folk heroes to have a gun and solve their problems independently of the law. Zorro was tailor-made for that, a sort of Robin Hood in a western setting (well, Mexico – close enough). The Western genre was popular and people knew what to expect. Gang of bad guys terrorizing small community, stranger rides into town, uses his superior fighting skills, and defeats the bad guys. This is basically the story of Zorro Rides Again.

The twist to Zorro Rides Again is that it has been contemporized. This both gives the story a fresh feeling (or at least it did in 1937) but it is also what causes the serial problems. The name Zorro, conjures images of swashbuckling swordplay. In 1937 the sword was replaced with a revolver. This makes logical sense, but is disappointing. Also, he is not fighting a corrupt government, but a gang of outlaws, and sometimes working side by side with the local law enforcement. This makes the mask, and his secret identity, somewhat unnecessary.

Despite these complaints, the serial does work. It is well written. Unlike many serials, the story holds together over the twelve chapters. It has some genuinely clever moments, some funny bits, and well executed cliff hangers. There is some good camera work and they know how to do horse riding sequences. Even the fight scenes are believable. These are people who know what the conventions are and how to use them successfully.

So, perhaps this is not the greatest or most memorable chapter in the long legacy of Zorro, but Zorro Rides Again is an entertaining one, none the less.

Things to Watch For
-Our villain, disguised as Zorro, strikes an old man across the forehead with his whip, once, and leaves a Z mark.
-Zorro, escaping from our villains, hops on a mining cart and rides it down the track like a rollercoaster.

The Back Row Weekly Serial Drinking Game
While watching a serial, anytime you, or a friend point, out a plot hole or inconsistency, take a drink. (Note: Zorro working with the local constabulary is not a plot hole. Zorro feeling it necessary to wear a mask while doing so, is.)
Odds of getting sloshed: Low to Medium