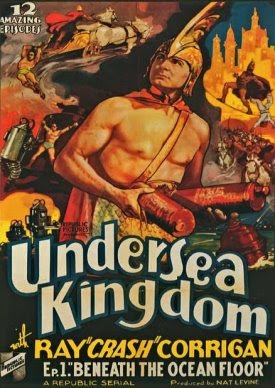 There are a wide variety of reasons why I like film serials. Most of them have to do with the fact that they’re fun. However, some of the reasons have to do with things like their historical significance. They exists a brief but important link between print media, film, and present day television series. Cliff hangers have been around forever. The story of The Arabian Nights, is about a clever woman who uses the technique to keep herself alive. The formalization of serials started in print form. Charles Dickens made his living getting his stories published as serials. Serials then translated into radio. Later they moved into film, as a gimmick to draw people back to the theatres week after week. Today serials have evolved to television in the form of mini series, soap operas, and regular series. It is the idea of quasi-independent, episodic stories, told as part of a much larger story arc. As more and more entertainment becomes web-based the serial is starting to take hold there also. Wherever media goes, the serial will follow, in one form or another.

Basic Story Line
Crash Corrigan, and company, discover the lost city of Atlantis. There, they must stop the evil ruler Unga Khan from taking over the world.

If serials like Flash Gordon, The Green Hornet and Zorro can be described as innovative, groundbreaking, and fun, then there must be serials that can only be described as lazy, redundant, and painful. Such a serial is Undersea Kingdom.

Undersea Kingdom is not much more than an attempt to cash in on the popularity of Flash Gordon. Raymond Bernard changed his on-screen name to Ray “Crash” Corrigan just so that it would sound like Flash Gordon. Like Flash, Undersea Kingdom has the all-American hero, the professor, the love interest, and the Asian looking villain. It was released about a month after Flash Gordon and was probably written, shot and edited in that time.

There is not much I can say about this serial, except how bad it is. How bad is it? It’s “rocket motor submarine” bad. One of the only things of interest in this mess is a young Lon Chaney Jr. in a supporting role.

The plot is paper thin and has to be stretched well past the breaking point to fill the twelve episodes. From the moment they arrive in Atlantis to the moment Unga Khan launches his attack on the upper world, only two things happen; Crash tries to save Professor Norton from Unga Khan and Unga Khan attacks the city of the good Atlantians. These two events have to be replayed over and over again to fill twelve chapters. They also have to pad the film, by replaying scenes of horses riding away from the tower and back to the tower, horses riding away from the city and back to the city, over and over again.

The serial is filled with pointless characters that do nothing. There is Joe, whose job it is to go crazy and get killed in the first episode. There are two comic characters who are there, apparently, to look after the parrot. They are so unimportant that nobody bothers to explain how they escape at the end. There is Sharad, whose job is to be the leader of the good guys and do nothing. Then there is Dian, the spunky reporter whose job in this serial is to… well, I don’t really know. In Flash Gordon, Dale’s job is to be in jeopardy, and make Princess Aura jealous. In The Green Hornet, Lenore’s job is to be the voice of reason. In Undersea Kingdom, Dian has no job. She is so inane that at the beginning of each episode her recap stays the same through the entire serial. Sometimes pointless characters can be made fun by good acting. This is not the case. (By the way, up until Undersea Kingdom, Crash Corrigan was a stuntman and physical trainer and is best known for having played the Orangopoid in Flash Gordon)

Another pointless element is the location. You would think that a serial called Undersea Kingdom would have a water theme. Instead this kingdom at the bottom of the sea is a desert. Despite being thousands of feet underwater there is still day and night. People ride around on horses. There are even airships. (Why airships under a dome? I don’t know.) The serial might as well have been set on another planet, or in the future, or in the past, or in an isolated country in the mountains.

Another sign that the script was rushed is the poor quality cliff hangers. Each week we see Crash Corrigan die. The next week, instead of some clever twist, where they show us how he gets out of the impossible situation, they show us different footage, where Crash doesn’t fall to his death, but instead grabs onto a rope and swings to safety.

I could talk about all the faulty logic, poor science, glaring contradictions and plot holes, the fact that he takes an 8 year old boy on all his dangerous missions, but what would be the point?

Things to Watch For
-One episode ends with Crash obviously getting trampled by horses, the next episode shows the horses just missing him.
-Crash tight rope walks, twice.

The Back Row Weekly Serial Drinking Game
While watching a serial, anytime you, or a friend point, out a plot hole or continuity error, take a drink. (Note: Crash wearing a funny hat is not a plot hole. Crash wearing a conspicuously funny hat while trying to sneak around, is.)
Odds of getting sloshed: High to Very High