Robin’s Underrated Gems: The Falcon and the Snowman (1985) 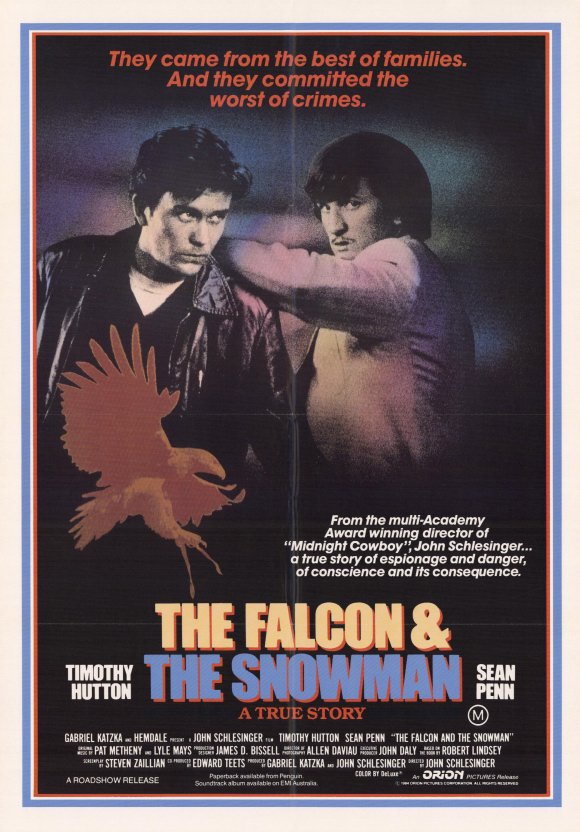 Today’s younger generation never grew up during the Cold War and may have no idea just how much of a hated enemy the Soviet Union used to be from the 1950s until the 1980s. Any “commie” American who willingly betrayed their country in order to help the Soviets was considered the absolute worst type of scum. That’s why it came as such a shocking surprise in 1977 when the source of one of the most infamous cases of treason in the history of the United States turned out to be two young men who were only a few years removed from puberty. 23-year old Christopher Boyce and 24-year old Andrew Daulton Lee were two seemingly normal suburban kids from wealthy, respectable California families who were both sent to prison after having spent nearly three years selling classified government information to the Soviet Union. These two young men were clearly not professional spies and no one could figure out why they would feel compelled to betray their country. A book about their case entitled “The Falcon and the Snowman: A True Story of Friendship and Espionage” was written and published by Robert Lindsey in 1979 and director John Schlesinger took an immediate interest in getting this story adapted to the big screen. Of course, given most studios’ unease with making a film where the two main protagonists are traitors, it took awhile for the project to get green-lighted, but in 1985, The Falcon and the Snowman finally made it into theaters. It garnered a lot of critical acclaim, but was inexplicably shut out at Oscar time and 26 years later, remains a highly overlooked and underrated gem.

At the beginning of the film, Christopher Boyce (Timothy Hutton) has just left a seminary and abandoned his plans to become a priest. While he does have a passion for falconry (hence why he later uses the codename “Falcon”), Chris isn’t quite sure what he wants to do with his life, so he moves back home to California with his family. His father (Pat Hingle) is a well-respected retired FBI agent and helps get Chris a job at a civilian defense contractor where he eventually earns a top secret position in an underground facility called the “Black Vault”. His job involves intercepting communications that contain information about classified government operations, and this allows him to find about out covert CIA operations involving their attempts to depose the governments of such democratic nations as Australia. Considering that President Nixon has recently been impeached, Chris becomes very disillusioned with his government and his country, so he devises a plan where he recruits his childhood best friend, Daulton Lee (Sean Penn), who now makes his living as a drug dealer and smuggler (hence why he is nicknamed “Snowman”). Chris will smuggle classified documents out of his workplace and Daulton will function as his courier by delivering and selling these government secrets to a Russian attache named Alex (David Suchet) at the Soviet embassy at Mexico City. All goes well at first and the two young men make some money, but since Daulton is a wanted fugitive and a paranoid drug addict, his behaviour starts to become very dangerous and irresponsible, which will eventually lead to their downfall.

If there’s one criticism that The Falcon and the Snowman has faced, it’s that it doesn’t offer any easy answers on the motivation of Christopher Boyce and why chose to do what he did. But in fairness, I’m not sure the real Christopher Boyce could explain why he did it either. Yes, he was obviously disillusioned with the illegal activities of his own government, but was selling classified secrets to the enemy really the answer? It seems that Chris doesn’t really do it for the money or because he wants to be a spy, but simply because he wants other people to find out about the bad things his country are doing. Of course, it eventually turns out that both him and Daulton are in way over their heads. Alex, their Russian contact, takes the espionage business very seriously and almost seems disgusted that these two young amateurs would dare enter his world. Regardless of whether or not you understand the motivation of his character, Timothy Hutton still delivers a very strong performance in the role, but The Falcon and the Snowman really soars because of the electrifying performance by Sean Penn as Daulton Lee. It’s interesting to compare the career trajectories of the two stars in this film. Timothy Hutton had won an Academy Award for his performance in Ordinary People five years beforehand and was one of the top young actors in Hollywood at this time, and while he’s still had a fairly solid and successful career since then, it’s clear that he peaked early. Sean Penn, on the other hand, was three years removed from his star-making turn as Jeff Spicolli in Fast Times at Ridgemont High and clearly did not want to be typecast by that role. The Falcon and the Snowman helped jump-start Penn’s career as a serious actor and he’s been one of the most respected actors in Hollywood ever since. This role was the perfect contrast to his performance in Fast Times because while Jeff Spicolli represented the goofy, comedic side of being a drug user, Daulton Lee definitely showcased the much darker side of that lifestyle.

The Falcon and the Snowman would be the first produced script by Academy Award winning screenwriter Steven Zaillian (Schindler’s List, Awakenings, Gangs of New York) who does a marvelous job at structuring this very complex story and making us care about the two protagonists even if we don’t agree with what they’re doing. It’s somewhat unfortunate that Falcon and the Snowman was released in theaters in January of 1985 since these days, January is the typical release month for projects that the studios have little faith in. Even though it garnered great reviews, the film was completely forgotten about a year later when the Academy Award nominations were announced. I’d say that Sean Penn’s performance should be an extra addition to my column about performances from “Robin’s Underrated Gems” that deserved Oscar nominations, but considering the two wins and five nominations that Mr. Penn has received since then, I doubt he’s crying about it. An interesting post-script to this whole story is that the real Christopher Boyce and Daulton Lee would both eventually be paroled from prison and Penn actually wound up hiring Lee as his personal assistant! It’s no secret that Sean Penn is known for his outspoken political views and while I’m sure he doesn’t endorse treason, he probably did identify with the disillusionment these two young men were feeling at the time they started selling secrets. The Falcon and the Snowman could have easily devolved into a routine spy thriller, but turned out to be a very powerful human drama that still packs quite a punch 26 years later. It may not be particularly well-known and remains criminally underrated, but it demands rediscovery.