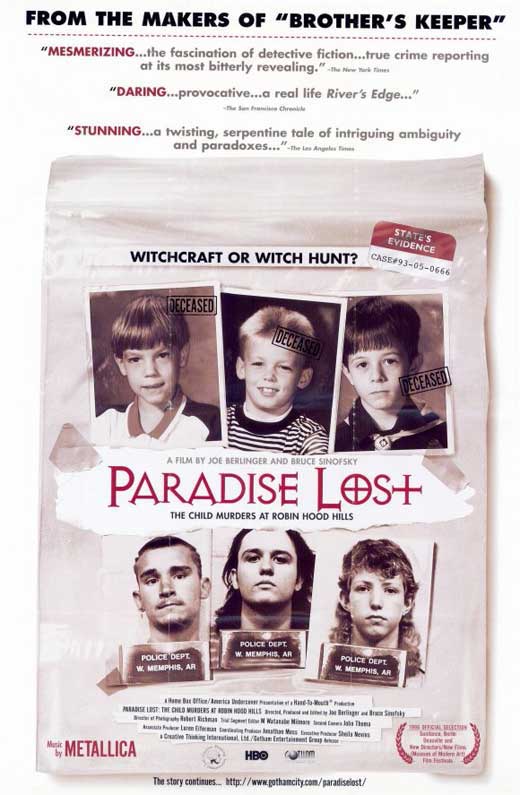 UPDATE: Only a month after this column was written, the subjects of this documentary were unexpectedly released from prison!

On our last Shouts From the Back Row podcast about documentaries, I summarized a documentary film that my comrades had never heard of and they were pretty horrified by some of the stuff I told them. On May 6, 1993, near the town of West Memphis, Arkansas, the naked, hogtied bodies of three local eight-year old boys, Christopher Byers, Michael Moore and Stevie Branch, were found in a ditch in the wooded area of Robin Hood Hills. Not long afterward, three local teenage boys, Damien Echols, Jason Baldwin and Jessie Misskelley (soon to be labeled as “The West Memphis Three”), were arrested and charged with the murders. Less than a year later, they would all go to trial and were found guilty of their crimes, with Echols being sentenced to death and the other two receiving life imprisonment. However, this case would soon be labeled as one of the biggest miscarriages of justice in history, as many people believed that these teens did not commit the murders. For the past 18 years, there has been a very vocal “Free the West Memphis Three” movement to get them exonerated and released from prison, and many prominent celebrities, such as Johnny Depp, Jack Black, Metallica, Marilyn Manson and the Dixie Chicks, have openly expressed their support for the cause. The recent “not guilty” verdict in the trial of Casey Anthony has caused much controversy and my first thought after hearing it was: “If Casey Anthony can get acquitted with such damning evidence against her, why in the hell have the West Memphis Three been in prison for 18 years?!”. The documentary, Paradise Lost: The Child Murders at Robin Hood Hills, suggests that three innocent teenage boys were convicted of murder for all the wrong reasons and presents a harrowing account of what has been described as a modern-day version of the Salem witch trials.

Summarizing the entire saga of the West Memphis Three case would take forever, so this column will focus primarily on the film. Paradise Lost was co-directed by Joe Berlinger and Bruce Sinofsky, who have also made such stellar documentaries as Brother’s Keeper and Metallica: Some Kind of Monster. Their original idea for Paradise Lost was to make a documentary about disaffected youth and examine what would compel teenagers to commit such a horrific crime. The media had already painted the West Memphis Three as monsters, so the filmmakers didn’t have any uncertainty about their guilt, but after traveling to Arkansas and delving deeper into the case, Berlinger and Sinofsky were astonished at how unconvincing the case against these kids really was and decided that their film would be a chronicle of a terrible miscarriage of justice. Paradise Lost immediately opens with one of the more disturbing sights you’ll ever in a film as it displays the actual police footage of the dead bodies at the crime scene. As horrible as this footage is, it succeeds at putting the viewer into the mindset of the community portrayed in this film: no matter what, you want SOMEONE to pay for committing this crime! The documentary suggests that the West Memphis Police Department were totally unprepared to solve a case of this magnitude and that when the pressure started to mount, they decided to find some convenient scapegoats. While being questioned by police, a local 17-year old named Jessie Misskelley would confess to being involved in the murders and implicate two other teens, Damien Echols and Jason Baldwin, claiming that they killed and raped the boys as part of a Satanic ritual. It’s easy for most people to automatically assume that a truly innocent person would never confess to a crime they didn’t commit, but it’s revealed here that Jessie was questioned by police for twelve hours without an attorney present and since he had an IQ of 72 and was borderline mentally retarded, he did not understand that his rights were being violated. Paradise Lost provides an eye-opening look at how people can be coerced into giving a false confession, and reveals that many of the things that Jessie confessed (such as the sexual assault of the victims) are completely inconsistent with the actual details of the crime scene! However, this doesn’t seem to matter much to the victims’ families and the citizens of West Memphis. While the filmmakers’ previous documentary, Brother’s Keeper, displayed how much a community was willing to support someone who was unjustly accused of a crime, Paradise Lost shows how quickly a community can turn on them.

West Memphis is portrayed as a very conservative and religious community where the accused teens have never really fit in. In particular, Damien Echols, the purported “ringleader” of the group, is a rebellious outsider with massive teen angst who always dressed in black, showed interest in Wiccan religion and the occult, and *gasp* listened to Metallica. It’s worth noting that Metallica was so outraged by this case that they allowed their songs to played in Paradise Lost for free, marking the first time the band had ever granted permission for a film to use their music. Even the biggest West Memphis Three supporter will admit that Damien was a very troubled teen with numerous personal problems, and that the cocky attitude he displays in the film probably didn’t help his case. However, just because a teen has a lot of issues doesn’t necessarily mean he’s a murderer. The only thing that should matter is that there is no physical evidence at all that links the West Memphis Three to the crime, but it seems that many people have already made up their mind about their guilt and cannot be swayed. Jessie is tried separately from Damien and Jason and is offered a reduced sentence if he’ll testify against them, but in spite of his earlier “confession”, he does not go along with this. As the trial for Damien and Jason begins, you realize just how weak the prosecution’s case against them really is and that, under normal circumstances, it would take a miracle to get a conviction. Paradise Lost then starts to get REALLY interesting once it appears that the actual killer of three boys is starting to reveal himself.

At the outset, John Mark Byers, the stepfather of one of the victims tries to make himself the centerpiece of the film by delivering long sermons about how the West Memphis Three are going to burn in Hell for what they did, and he vows to dispense his own brand of vigilante justice if they are not convicted. Byers has an extensive criminal record and has a history of physically abusing his stepson, and he shocks the filmmakers by giving them a hunting knife for Christmas which appears to have traces of blood on it! They turn it over to the police for evidence and Byers is made to testify about the knife in court, but the investigation of him doesn’t appear to be very thorough even though it sounds a lot more plausible that those kids might have been killed by an abusive family member instead of a trio of Satan-worshiping teens. A couple years later, the filmmakers would do a sequel called Paradise Lost 2: Revelations, which might as well have been titled The John Mark Byers Show since he spends much of that film displaying utterly bizarre behaviour in front of the camera where he further implicates himself and builds up suspicions of guilt. To be fair, Byers has actually changed his tune in recent years and has openly stated that he now believes the West Memphis Three did not commit the crime. Even though he’s obviously still a mentally unbalanced individual, Byers may actually be innocent after all, but for over a decade, it was absolutely terrifying to watch Paradise Lost and believe that this man was getting away with murder. However, the surprising post-script to this whole saga came in 2007 when a strand of hair found in one of the ropes at the crime scene had a DNA sample that did not match John Mark Byers, but DID match Terry Hobbs, the stepfather of Stevie Branch.

Even though Hobbs is barely glimpsed in Paradise Lost and doesn’t leave much of an impression, one only has to research his troubled background and his suspicious behaviour on the day of the murders to believe that he is more than capable of having committed this crime. While his defenders will state that this one strand of hair isn’t strong enough evidence to convict Terry Hobbs, the troubling thing that it’s still stronger evidence than what was used to convict the West Memphis Three in the first place! They still sit in prison to this day even though none of their DNA has ever been connected to the crime scene. Critics of Paradise Lost have complained the film is heavily biased and tries to paint the defendants in the best possible light. That’s certainly true, but if you were to conduct further research into the West Memphis Three case, you’ll discover tons of information that wasn’t even MENTIONED in the film which further supports their innocence. Parallels can be drawn between Paradise Lost and the Errol Morris documentary, The Thin Blue Line, which also chronicled the story of an innocent man sitting on death row for a crime he didn’t commit. However, while The Thin Blue Line played a large part in eventually getting him exonerated, Paradise Lost and the “Free the West Memphis Three” movement have been unsuccessful in their efforts during the past 18 years and watching the film, it’s not hard to understand why. Many prominent law enforcement officials and attorneys made their careers with the West Memphis Three case and actually admitting that they made a huge mistake would be a huge P.R. disaster for them. In light of recent developments about this new DNA evidence, an evidentiary hearing has finally been scheduled for the West Memphis Three this coming December to determine if they will get new trials. Rumours have abounded that this new hearing may lead to the release of a Paradise Lost 3, which may hopefully chronicle the West Memphis Three’s exoneration. In the meantime, the original Paradise Lost is essential viewing for all documentary buffs and I think the reason it’s remains somewhat underrated is because the notoriety of the West Memphis Three case has overshadowed what a first-rate piece of filmmaking Paradise Lost really is. It will never be considered one of the biggest feel-good documentaries of all time and a lot of its implications are pretty scary, but it remains an incredibly eye-opening, thought-provoking and compelling piece of work.