Runstedler’s DVD Pick of the Month: The Reflecting Skin

Posted on August 1, 2011 by curtisrunstedler 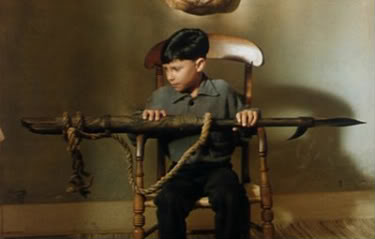 If you’re feeling sad or down or if you’re overly sensitive, I would not recommend watching The Reflecting Skin. It’s a harrowing experience. British director Philip Ridley’s 1990 film paints a terrifying yet unforgettable portrait of the life of a young boy who grows up too fast in 1950s Idaho. In light of my recent completion of Alan Wake, which was developed by a Finnish team and takes place in America, I find it interesting how European filmmakers and developers portray American society. The Reflecting Skin is almost nihilistic in its depiction of America. The film is a searing antithesis to the joyous, sappy portrayals of stories about children in the Midwest, such as Little House on the Prairie. What’s even more interesting in the case of The Reflecting Skin with regards to European depictions of American culture and society is that Cameron Dove is a little boy who lives with his psychotic mother and absent-minded father in the prairies of Idaho. The very setting of the story is almost purgatorial, with the unchanging flat fields of wheat and barley reaching far into the distance on all sides.

Cameron and his friends pull a nasty prank on their new, slightly unhinged neighbour, which involves a slingshot and an exploding frog. His father tells him all about vampires and after a visit to his neighbour where he apologizes for what he’s done and she gives him a harpoon gun, he becomes convinced that she is a creature of the night. After an unsettling visit from the boys in the symbolic black car–which seems to haunt the purgatorial landscape and appears whenever someone is about to die–the Cove family discovers the body of one of Cameron’s friends, and the town’s dark secrets begin to unravel. It turns out that the father got into trouble with the law before for having sexual relations with an underage boy. The town sheriff is quick to blame the father for the murder. I felt that the sheriff and the Mormon preacher didn’t really fit in with the tone of the film. The sheriff has this metallic eyepatch and it looks like he belongs in a sci-fi movie or something, and the preacher’s overacting really offsets the otherwise great acting in the film.  Ashamed and humiliated, the father commits suicide by dousing himself in gasoline and setting himself alight–in front of his son. His mother is far worse. After neglecting her warnings to turn off the lights and stop reading his vampire stories, she forces him to drink water until his bladder literally cannot hold anymore. My skeletal interpretation of this is that the mother has suffered years of sexual repression and humiliation. She has been unable to discover and fulfill her own needs and desires because her husband is so weak and effeminate and they are bound to these purgatorial landscapes, and these years of frustration manifest in the form of rage and torture towards her defenceless son.

The enduring trauma and lack of humanity in this film suggests what I think is homicidal tendencies in young Cameron. From an adult’s perspective, you can detect many of the subtle nuances and psychological issues apparent in his life. He views the world from a fantastic children’s perspective though, and the film emphasizes this perspective to its advantage. The black car symbolizes death. Cameron associates death with hoodlums and wild adolescents, which probably stems from something his deranged mother said to him. It’s curious that the black car appears every time he’s alone with one of the future victims, so it only makes sense that he’s the one killing the people around him. Anyway, the children of the town continue to get killed off by the riders in the black car, and Cameron’s much older brother returns home from nuclear tests in the Pacific to take care of his family. Cameron’s brother, who is played by a youthful-looking Viggo Mortensen, begins a relationship with Cameron’s strange, supposedly vampiric neighbour, and he views his brother’s loss of hair and bleeding gums (radiation poisoning, no doubt) as the work of a vampire. He digs further and further into his fantastic world to escape from the horrifying reality around him, taking a mummified fetus he finds in a barn into his care. The fetus becomes his confidante, the only one who will listen to his pains and struggles as he tries to maintain the innocence of childhood. Alas, his fucked-up society will not let him do so, and the film ends on a tragic note.

The visuals are absolutely gorgeous, evoking Terrence Malick’s aesthetics. Many commentators consider the film to be Lynchian in its presentation, but I think that it strays from Lynch’s style of directing, and I feel that that’s for better. The surreal style of the film often borders on the absurd and near impossible, but it should be said that everything in the film that happens could happen in real life. Film buffs and literary critics will appreciate the rich allegorical content of the film, as disturbing as it may be, and together with mostly solid acting, an intriguing storyline (to say the least) and incredible visuals, The Reflecting Skin is a fascinating descent in a coming of age story told from the bleakest perspective possible. There were certain scenes that I still don’t quite understand, such as a really random scene where these two women walk past Cameron talking in a strange, unknown tongue, carrying a dead bird. If anyone can interpret this scene within the given context of the film, I’d love to hear your thoughts.

Unfortunately, the film is not available on DVD or Blu Ray in North America or the UK. The German issue of the film offers English audio, but if you really want that DVD or Blu Ray with superior quality, your best bet is to order it from Japan, where the quality and sound should meet your standards accordingly. The VHS copies that can be found at your local video retailer outlets are a bit choppy. YouTube offers the film in its entirely, but again, the resolution is pretty weak. Download a high definition copy of the film if you can, or just buy it from Japan. I’ve included links to the Youtube videos below for your convenience.