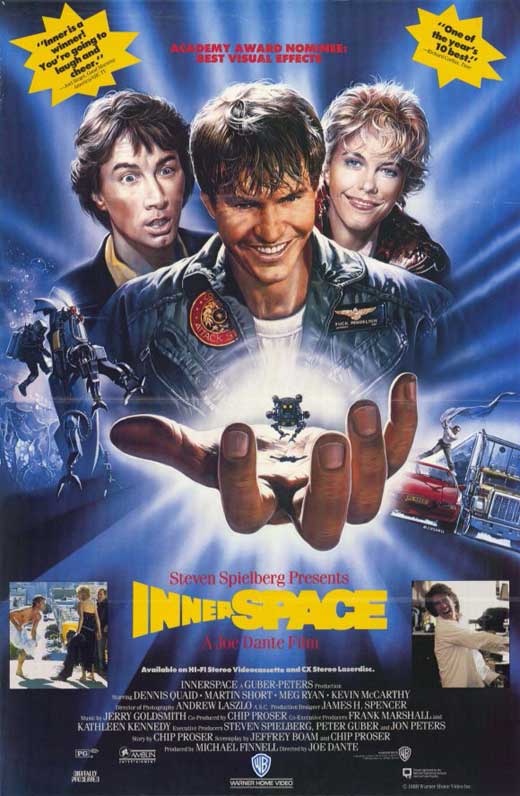 “Robin’s Underrated Gems” has profiled quite a few films that were flops at the box office during their original release and, in certain cases, it isn’t hard to figure out why. Regardless of their quality, many of those efforts were purely cult films and were never going to catch on with a mainstream audience. However, sometimes a film will just seem like a sure-fire crowd-pleaser that audiences are bound to love, but for inexplicable reasons, it fails to catch on. Such was the case with Joe Dante’s criminally underrated 1987 sci-fi comedy, Innerspace. Dante started out his career as a cult director who made better-than-average B-movies for Roger Corman, but he struck gold in 1984 when he teamed up with Steven Spielberg to make Gremlins, which was one of the biggest box office smashes of the year. Dante has made some tremendously fun films in his career, but sadly, none of them have managed to recapture the massive success he found with Gremlins (including Gremlins 2: The New Batch, my personal pick for the most underrated sequel of all time). While Innerspace was hardly a commercial disaster, it is filled with so many inventive moments, huge laughs and top-notch special effects, and does such a great job of entertaining its audience that it really should have been a blockbuster hit. Sadly, one of its major obstacles might have been its rather lackluster theatrical trailer, which doesn’t really convey what a fun ride this film is.

Innerspace is obviously inspired by the 1966 sci-fi film, Fantastic Voyage, where a submarine and its crew were shrunk to microscopic size and injected into the body of a wounded diplomat, so they could perform surgery on him from the inside. Innerspace takes place in the 1980s world of Silicon Valley where scientists are working to perfect the process of miniaturization. A cocky test pilot named Tuck Pendleton (Dennis Quaid) volunteers to participate in a secret experiment that will involve him climbing into a submersible pod and being shrunk down to microscopic size for injection into a rabbit. Just after Tuck has been miniaturized and placed in a syringe, the lab is taken over by a group of villains want to steal the technology for themselves. One of the lab technicians escapes with the syringe and through complicated circumstances, winds up injecting the pod into the ass of a wimpy hypochondriac grocery clerk named Jack Putter (Martin Short). Eventually, Tuck is able to communicate with Jack from inside his body and even though Jack is initially freaked out about hearing voices in his head, it isn’t long before the two men start to bond by getting drunk together and performing a gratuitous dance number.

Needless to say, the plot from Innerspace is incredibly convoluted. It turns out that the villains are led by the evil Victor Scrimshaw (Kevin McCarthy) who employs his own miniaturization scientist Dr. Canker (Fiona Lewis) and a badass henchman with a robotic arm named Mr. Igoe (Vernon Wells). Scrimshaw wants to sell the miniaturization technology to a mysterious fence simply known as The Cowboy (Robert Picardo), but he needs to capture Jack in order to access a microchip that’s located inside of Tuck’s pod. Scrimshaw’s gang have already stolen the chip that be used for miniaturization, but both chips are required for re-enlargement. Jack is forced to turn to Tuck’s estranged reporter girlfriend, Lydia (Meg Ryan), for help in tracking the villains down and recovering the stolen chip since Tuck has less than 24 hours before the oxygen supply in his pod runs out. This leads to a very interesting love triangle as Jack develops a massive crush on Lydia, but of course, he can’t exactly hide this from Tuck when the guy is inside his body. While this plot could have easily become bogged down in all its complications and exposition, the relationships and interaction between the characters manage to keep things consistently entertaining. One of the film’s best ideas is that Jack is obviously a complete weakling who is in way over his head, but now he’s got a new friend inside his body who can motivate him and give him more self-confidence than he ever imagined. In this scene, Tuck actually delivers a motivational speech to Jack that inspires him to attempt an escape from the bad guys.

The original screenplay for Innerspace was written by Chip Proser and is easily available for viewing on the Net. Proser’s version of the script is an overlong mess that, aside from its basic premise, bears almost no resemblance at all to the final cut of the film. Thankfully, one of the top screenwriters in Hollywood at the time, Jeffrey Boam, was brought in to do some major rewrites. Anyone who’s seen the interaction between Harrison Ford and Sean Connery in Indiana Jones and the Last Crusade and Mel Gibson, Danny Glover and Joe Pesci in Lethal Weapon 2 will know that Boam is one of the all-time best at writing interplay between mismatched buddy combos. Innerspace is no exception as the unique relationship between Tuck and Jack provides the foundation of the film and Dennis Quaid and Martin Short display amazing chemistry, considering that they’re technically not even onscreen together until the very end of the film. Quaid is saddled with the incredibly daunting task of having to act out most of his role within a very confined space, but he manages to make the most of it, and while most of the titles in Martin Short’s filmography are less than stellar, Innerspace is the one film which managed to utilize his comedic talents to their fullest and gave him great material to work with. You can’t say that Innerspace doesn’t milk its clever premise for all it’s worth as the film is chock full of neat ideas, such as when Tuck performs an experiment where he alters Jack’s facial muscles, allowing him to impersonate The Cowboy!

The visual effects in that scene and many others are first-rate and actually won Innerspace an Academy Award. The effects hold up remarkably well 24 years later and even though the scenes that take place in Jack’s body could have easily aged badly, they still look pretty damn convincing. Innerspace sounds like a sci-fi espionage thriller on paper, but it really functions best as a comedy and delivers a great deal of genuine laughs. Joe Dante fills many of his roles with his cast of regular actors, such as Kevin McCarthy, Robert Picardo, Kenneth Tobey (who pops up to deliver the film’s funniest line) and (of course!) Dick Miller, who all seem to be having a ball with the material. If there’s one flaw to Innerspace, it’s the fact that the ending that sets up things up for a sequel. I’m sure they figured that this movie would gross a jillion dollars and that a follow-up was inevitable, but due to its underwhelming box office performance, a sequel never happened. In the end, I have no idea why Innerspace never caught on and became a huge hit. Given the quality of mind-numbing Hollywood blockbusters right now, I’m sure audiences would kill to see a special-effects extravaganza with this much wit and creativity these days. In spite of its lack of financial success, Innerspace still has a very loyal group of devout fans and they would all agree that the film remains just as entertaining today as it was in 1987. It may be sad to see a great film flop, but hey, underappreciated efforts like this are what keep “Robin’s Underrated Gems” in business.