The Back Row’s Weekly Serial Review: Adventures of Captain Marvel 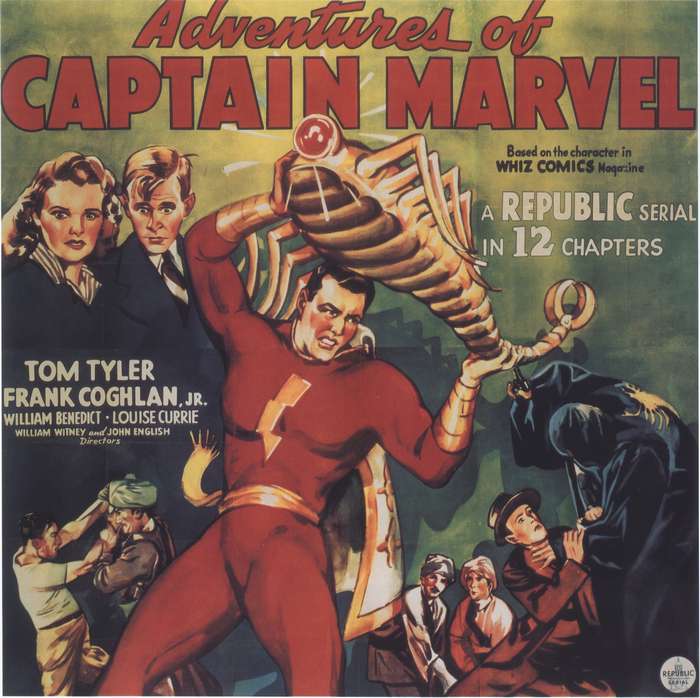 Basic Story Line
Billy Batson invokes the power of Captain Marvel to prevent The Scorpion from obtaining the 6 optical lenses that make up a weapon of great power.

Adventures of Captain Marvel has been described by some as one of the greatest serials ever made. This is a statement that I will not argue.

When watching a serial, I’m always pleasantly surprised when I see something that is really good. Not just good for a 1930s or 1940s serial, or good in a fun and cheesy way, but genuinely good. Adventures of Captain Marvel has those moments. Most of the credit has to be given to the directors John English and William Witney. They know where to put the camera. They understand lighting and shadow. They can show violence and torture but avoid the sensors by putting it just of screen, or in shadow. In one scene they give us glimpses of The Scorpion with his hood off, but because of the speed, angle, and shadow, they allow us to think we see the villain without actually revealing his identity. It is a masterful shot.

Of course it helps that  English and Witney have a good script to work with. The story is a solid mystery with some surprisingly dark turns, such as murder, torture, and Captain Marvel doing some things that you will never see Superman do. This includes throwing a man off a building. It also takes the 1940s’ viewer into exotic locations (Although, the Burmese jungles look remarkably like the deserts of California.) It’s not a perfect script. There are contradictions. The mystery doesn’t give you any actual clues to who the Scorpion is. There are moments in the script where you’re sure they meant to explain something but just ran out of time.  Instead they use lame tricks such as having a character say, “I’ll explain it later.” or cutting to a character saying “Well, that explains that.” What? What explains that!

I don’t want to dwell on a few script problems and a geography issue. If you are able to stretch your suspension of disbelief, this really is one of the best serial ever made. It has mystery. It has action. It has a cool villain and it has cutting edge 1940s special effects.

Things to watch for
-Cars that drive themselves with unconscious passengers.
-Cool death traps
-A skull with a directional arrow

The Back Row Weekly Serial Drinking Game
While watching a serial, anytime you or a friend point out a plot hole or inconsistency, take a drink. (Note: Seeing the strings or the dummy in the flying sequences is not a plot hole. After promising to only use his powers for good, Captain Marvel gunning down four unarmed men as they run away, might be.)
Odds of getting sloshed: Low to Medium