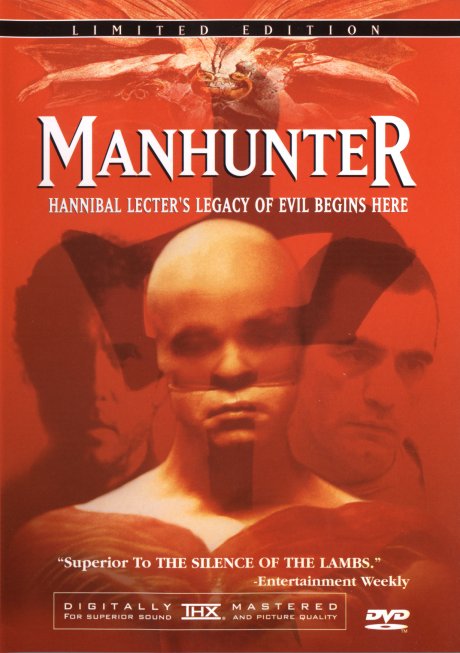 On this week’s edition of Shouts From the Back Row, we discussed our personal choices for the best cinematic adaptations of novels, and one of my choices was based on Thomas Harris’ terrific 1981 crime novel, Red Dragon. There have been two screen adaptations of that book, but unfortunately, it’s the inferior one that most people are familiar with. I still remember that when Brett Ratner’s version of Red Dragon was released in 2002, most people I knew liked the film a lot and were surprised to find out that I didn’t care much for it. When they asked why, I explained that I thought Manhunter was the definitive adaptation of the novel, and that doing a remake of it only 16 years later was pointless and redundant. The most common response I got to that was: “What’s Manhunter?”. In 1986, Michael Mann directed the first screen adaptation of Red Dragon and it’s rumoured that the only reason the title was changed to Manhunter was because a film called Year of the Dragon had bombed at the box office the previous year, and producer Dino De Laurentiis believed that having the word “dragon” in the title would bring bad luck. Well, in spite of the new title, Manhunter was not a box office success either and received mixed reviews, and while it’s built up a cult following and lot of respectability during the last 25 years, it is still fairly unknown to many people and remains overshadowed by the other Red Dragon adaptation.

Thomas Harris’ original novel was one hell of an exciting page-turner that I was able to get through in only a few days and Manhunter definitely does the story justice. It tells the story of Will Graham (William L. Petersen), a former profiler for the FBI who has a special gift for being able to get directly inside the mindset of a criminal, which has helped him figure out the identities and track down some of the world’s most dangerous serial killers. He could almost be described as a much darker modern-day version of Sherlock Holmes as he is able to make accurate deductions from the smallest clues, the side effect being that it causes his mind to go into a really scary place. This has taken a severe psychological toll on Graham and after one particular case nearly wound up costing him his life and his sanity, he has decided to take early retirement and settle down with his wife and son. However, Graham’s peaceful solitude is broken up when he’s approached by his former FBI superior Jack Crawford (Dennis Farina), who desperately needs Graham’s help in capturing a real monster. This serial killer has wiped out two entire families inside their homes in different cities, and the bite marks he left on the victims have earned him the nickname, “The Tooth Fairy”. The killer seems to work on a lunar cycle, so the FBI likely only has three weeks until he strikes again. Graham reluctantly agrees to go back into action at the risk of his own mental health.

Graham winds up consulting with the same incarcerated serial killer who almost killed him and drove him insane. This would be the first screen appearance of one of the most famous villains of all time: Hannibal Lecter (whose name is spelled “Lecktor” here, for some reason!). Only this time around, he is played by legendary character actor Brian Cox. I think there was really only one reason that the Red Dragon remake was made: to milk the Hannibal Lecter cash cow for everything it was worth. Red Dragon was released only a year after Hannibal came out, and even though Lecter/Lecktor is a supporting character that appears in only a handful of scenes, I’m sure it was very tempting to do another version of the story that contained his first screen appearance, featuring Anthony Hopkins in a greatly expanded role. However, by putting a larger focus on Lecktor, Thomas Harris’ original story about Will Graham and the Tooth Fairy wound up getting short-changed. However, Manhunter makes no such mistake and still remains one of cinema’s most exciting depictions of how law enforcement attempts to catch a killer. This is one of the earliest films to show the role that forensic science can play in helping to solve a crime, which is pretty prophetic, given the success that William L. Petersen would eventually find on CSI. Manhunter is often quite riveting when it shows Graham and the FBI using clues from the crime scene to piece together the investigation, particularly a sequence where they find a note from the Tooth Fairy in Lecktor’s cell and analyze it from every possible angle to try and figure out the killer’s identity. While it is a pretty faithful adaptation of Harris’ novel, the changes that Manhunter does make turn out to be beneficial. The novel reveals the actual identity of the Tooth Fairy early on and delves into his back story while cutting back and forth between him and Graham’s investigation. Unlike the second adaptation of Red Dragon, Manhunter keeps the Tooth Fairy completely off-screen for the entire first half of the movie and when the character of Francis Dollarhyde (Tom Noonan) finally does make his first appearance, it’s pretty friggin’ scary!

Manhunter actually makes the daring decision to cut away from Graham and the FBI investigation for a large chunk of the film’s final third to tell the story from the point of the killer! The film delves into the seemingly normal everyday life of Francis Dollarhyde, particularly his romance with a girl named Reba (Joan Allen in one of her earliest roles), who is blind and therefore does not realize how creepy he really is. Surprisingly, this section often portrays Dollarhyde in a sympathetic light, though it does contain some bone-chilling moments, such as an the oblivious Reba sits down to watch some home movies with him, unaware that he is watching footage of the next family he’s planning to slaughter! These sequences perfectly demonstrate the thin line that separates people like Graham and Dollarhyde, and how easily normalcy can devolve into insanity. While the studio wanted a more recognizable name in the role of Graham, Michael Mann was impressed by William L. Petersen’s work in To Live and Die in L.A. and lobbied for him. This represented the second straight film where Petersen did a tremendous job playing a law enforcement character with a very dark side, and shows that he was one of the more underrated leading men of the 1980s. The Red Dragon remake really downplayed the character arc of Graham having to struggle with his own sanity, which I think prevented Edward Norton from giving a memorable performance in the role. Not allowing Norton to re-enact the scene from Manhunter where Graham finally has to explain his inner demons to his young son was borderline criminal. While Ralph Fiennes was quite good as the Tooth Fairy in Red Dragon, his performance still couldn’t touch Tom Noonan’s in terms of pure creepiness, and I believe that Francis Dollarhyde remains one of the more underrated villains in screen history.

Of course, Brian Cox’s portrayal of Hannibal Lecktor is not as memorable and iconic as Anthony Hopkins, but it’s still a very strong and interesting interpretation of the character. While Hopkins’ version is so outwardly creepy that you wonder how he could have passed as a normal, well-respected psychiatrist, Cox is more subdued and is therefore more believable at conveying how dangerously manipulative Lecktor can be. In the end, I’m not sure why Manhunter was not a bigger success in 1986. Considering that Miami Vice was at the peak of its popularity, I think a lot of people just didn’t take Michael Mann seriously as a filmmaker and had little faith in him being able to tackle such a dark, multi-layered story. Admittedly, there are a few Miami Vice-esque elements that have dated the film a bit (including some cheesy eighties songs on the soundtrack, most especially the one that plays over the end credits), but Mann’s stylistics really serve the story well here and visually, the film looks terrific. I’ve always believed that the one bright spot of an unnecessary remake is that it can compel viewers to go back and check out the original film. Unfortunately, that did not seem to be the case when Red Dragon came out, no doubt because its predecessor had a completely different title. However, in spite of being less well-known, Manhunter is definitely the far superior adaptation of Red Dragon, and both the original novel and the film deserve to be experienced. In fact, even though The Silence in the Lambs is the most highly regarded entry in the Hannibal Lecter series, I’d even so far as to say that Red Dragon is the superior novel and that Manhunter is the superior film. Hannibal Lecter fans are strongly encouraged to check it out to see where the character originated from, and they’ll also be treated to one hell of an excellent standalone movie as well.