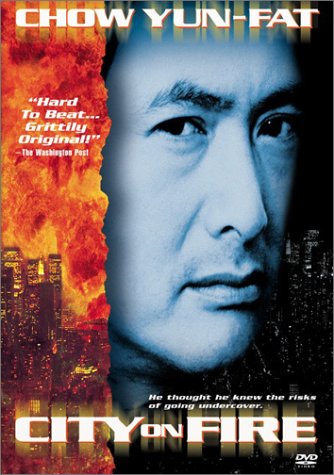 On our Shouts From the Back Row podcast about Quentin Tarantino, we talked about the director’s pure love of cinema and his desire to pay tribute to the movies that inspired him. His fans will call it a homage, but his detractors will usually call him a ripoff artist. This topic has been very hotly debated ever since Tarantino’s directorial debut, Reservoir Dogs, particularly due to that film’s similarities to a 1987 Hong Kong crime drama called City on Fire. Being the ultimate film geek, Tarantino loves to pay homage to his favourite films in his work, and Reservoir Dogs contains many obvious examples of this. Its flashback structure was greatly inspired by Stanley Kubrick’s The Killing and his idea to have the criminals name themselves after colours was clearly taken from the original Taking of Pelham One Two Three. However, at the time Reservoir Dogs was originally released, not many people noticed the similarities to City on Fire because very few folks had actually seen it. Tarantino had always been a huge follower of Hong Kong action cinema, but since many of those Hong Kong films were just starting get mainstream exposure in North America in the early 1990s, it was not until after the release of Reservoir Dogs that the comparisons to City on Fire would be made. This subject shall be open to debate, but for the moment, I shall focus on the merits of City on Fire as a standalone film. Directed by noted action director Ringo Lam, City on Fire is a first-rate crime thriller that perfectly demonstrates why Hong Kong cinema became very popular amongst film buffs in North America.

The story centers around a police officer named Ko Chow (Chow Yun-Fat) who is convinced by his boss, Inspector Lau (Yueh San), to go undercover into a gang of jewel thieves. Another undercover cop has already been murdered while attempting to infiltrate this gang, so Lau decides to share Chow’s deep cover operation with no one else in the department. This assignment turns out to be a very stressful one, as he is constantly facing pressure from his girlfriend Hung (Carrie Ng), who threatens to leave Chow if he does not marry her. In addition, he is constantly being pursued by a squad of police officers lead by the cocky young Inspector John Chan (Roy Cheung), who has no idea that Chow is an undercover cop. Things get even more stressful for Chow when he finally meets up with the leader of the gang, Fu (Danny Lee), and winds up developing a bond with him. Chow is constantly haunted by the fact that he had to betray someone he genuinely liked on a previous undercover operation, so he becomes torn between his allegiances to the police and his new friend. He sincerely debates whether or not he really wants to betray Fu and turn him over to a police force that has never treated Chow very well to begin with.

City on Fire was made not long after John Woo’s A Better Tomorrow caused Chow Yun-Fat’s popularity to skyrocket and this film helped solidify his status as the biggest movie star in Hong Kong. Chow just oozes charisma at every moment in this film, delivering a terrific performance as Ko Chow and bringing a ton of depth to the role which greatly elevates the material. Danny Lee also gives a very solid performance as Fu, and considering that he and Chow Yun-Fat would team together two years later for The Killer, one of the most popular Hong Kong action films of all time, it’s neat to see them both playing off each other in opposite roles here. City on Fire is probably the best film in the career of director Ringo Lam, and he delivers a fairly serious and straightforward crime thriller that isn’t as overly stylish as many other Hong Kong action films, but is still very violent and exciting. Now, to be honest, for the first three-quarters of City of Fire, I had no idea where these comparisons to Reservoir Dogs were coming from. However, once the film reached the climax where Chow accompanies Fu and his gang on a major heist where everything goes wrong, the parallels to Mr. Orange and Mr. White started to shine through, and I could see where Quentin Tarantino’s inspiration came from. If you don’t mind spoilers, here’s a clip that showcases the similarities between the two films.

In essence, Tarantino pretty much took the last twenty minutes of City Fire and decided to build an entire movie around that. But does that make Reservoir Dogs a ripoff? I really don’t think so. Sure, Tarantino lifts a few shots and ideas from the last act of City on Fire, but they are two completely different movies. City of Fire is a straightforward cop story/heist film, but Reservoir Dogs is a heist film that doesn’t actually show the heist, choosing only to show the aftermath and a bunch of flashbacks that show how the characters got to that point. Tarantino’s entire career has been based upon taking ideas from his favourite movies and putting his own unique spin on them, and since he’s always done it so well, only his biggest detractors accuse him of being a ripoff artist. In fact, most of the people who accuse Reservoir Dogs of being a City on Fire ripoff just seem to hate Quentin Tarantino to begin with and would probably find some other way to dump on the film if City on Fire never existed. City on Fire may have remained in complete obscurity if it were not for the Reservoir Dogs comparisons, so at the very least, Tarantino has helped bring some extra attention to a very good crime thriller. That said, since Reservoir Dogs is still the better film overall, it’s probably best to view City on Fire on its own terms and just forget about the comparisons. It’s a very solid and entertaining crime drama with strong performances and exciting action scenes, and even if it didn’t inspire one of the greatest directors of our generation, it would still be well worth checking out.