Robin’s Underrated Gems: The Last House on the Left (1972) 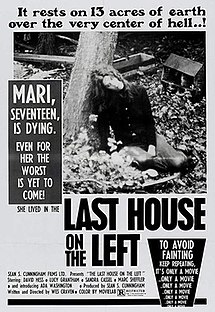 I’ve been wanting to write this column for a long time, especially since the late, great David Hess passed away last week, but the only thing I debated was whether The Last House on the Left could be considered an “underrated gem”. Wes Craven’s 1972 classic is considered one of the more groundbreaking, influential horror films of all time, and has gained more exposure in recent years because of a remake that was released in 2009. However, although Last House is regarded as a classic amongst horror buffs, it is not particularly well-known amongst casual movie fans, and does not have the mainstream crossover appeal of such other influential classics as Night of the Living Dead, The Texas Chainsaw Massacre and Halloween. For many years, I thought I was the only person who had even heard of The Last House on the Left, let alone seen it, and even once tried to introduce a group of friends to the film in high school. They’ve still never forgiven me for it! However, whether it is truly “underrated” or not, Last House on the Left definitely deserves a full analysis. This will always be one of the most hotly debated horror films of all time, and truly defines the term “love it or hate it”. You can never really predict how a person is going to react after watching this film, which truly makes it a one-of-a-kind experience. While Wes Craven would garner his greatest mainstream success with A Nightmare on Elm Street and Scream, Last House on the Left still remains his most raw, disturbing and powerful piece of work, and even Craven himself looks back at the film today and is shocked by some of the things he did. The end product is the result of a group of ambitious young people who had no clue about what they were doing, but decided to get together to make a movie, and wound up inadvertently breaking several screen taboos and changing the course of cinema history.

While Last House on the Left was remade two years ago, it also happens to be a VERY loose remake of an unlikely source: Ingmar Bergman’s The Virgin Spring! Bergman’s Swedish film was based on a medieval fable about a group of killers who murder a young girl and wind up spending the night in the home of her parents. Last House on the Left is a modernized variation of that story which examines the circumstances that can make anyone capable of violence. Mari Collingwood (Sandra Cassel) is a sweet, naive girl who lives out in the country with her middle-class parents (Cynthia Carr, Gaylord St. James) and decides to celebrate her 17th birthday by going to a rock concert in the city with her rebellious friend Phyllis (Lucy Grantham). The two girls decide to buy some pot before the concert, but wind up in the clutches of a gang of recently escaped convicts. They are lead by the sadistic Krug Stillo (David Hess), who is accompanied by his equally sadistic sidekicks, Weasel (Fred Lincoln) and Sadie (Jeramie Rain), and his heroin-addicted son, Junior (Marc Sheffler). After kidnapping the girls, the gang’s car breaks down in the middle of nowhere, so they decide to take Mari and Phyllis out into the woods to brutally rape and murder them. The gang is then forced to seek shelter in the nearest house, which, of course, just happens to be Mari’s home. When Mr. and Mrs. Collingwood eventually find out that their new guests just murdered their daughter, they exact a vicious revenge and find themselves committing acts of violence that they never would have thought they were capable of.

Now, even its biggest fans of the cannot deny that Last House on the Left is an incredibly sloppy and amateurish piece of filmmaking. The movie was produced by Sean S. Cunningham, who would later go on to create the Friday the 13th series, and even though he and Wes Craven are two of the most influential figures in horror movie history, they would be the first ones to tell you that they had no idea what they were doing when they made Last House. Neither of them had any experience or training about how to make a feature film, so their idea was to basically take the camera and shoot a bunch of footage without any real planning. The film has its fair share of missteps, especially with its decision to introduce a pair of bumbling Keystone cops (one of them played by Martin Kove, who would go on to great fame as Sensei Kreese in The Karate Kid) into the plot as comic relief. Their scenes are incredibly broad and goofy and don’t mesh well at all with the darker, more violent elements of the story, but then, if these silly scenes weren’t in the film to briefly relieve the tension, Last House might have become unbearably disturbing to watch. In addition, David Hess himself composed the film’s very unconventional, folk-like music score, which often doesn’t seem to match a lot of the events that are happening onscreen, but does leave a very memorable impression and almost makes the film more disturbing. However, I think the main reason that Last House on the Left works so well is because its sloppy, amateurish filmmaking doesn’t damage the film, but actually ENHANCES it! Last House often has a very gritty, realistic, documentary-like feel to it which may have been unintentional, but gives the film an amazing raw power. During the sequences in the woods, you don’t feel like you’re watching a movie, but some actual homemade snuff footage of two girls being raped and tortured, and in 1972, audiences had never seen anything like that before. I’m sure you all know that the most overused horror film cliche of all time is the villain suddenly appearing out of nowhere to scare the audience. However, when Last House was originally released, this cliche was still fairly new, so audiences literally wound up jumping out of their seats during this sequence where Phyllis almost escapes from the woods until Krug makes a surprise appearance.

The preceding sequence also broke new ground by being one of the first films to show viewers that victims of violence did not always die quickly. Before Last House, most horror films would have had Phyllis die instantly after being stabbed, but Craven’s intention was to show violence the way it actually was in real life: a very painful, protracted and dehumanizing experience. Of course, there were a lot people who were REALLY pissed off by that decision! Surprisingly, Roger Ebert wrote one of the few positive reviews that Last House received during its initial release and summed things up perfectly when he wrote: “The audience (mostly in the mood for just another good old exploitation film) was rocked back on its psychic heels”. David Szulkin’s excellent Last House on the Left: The Making of a Cult Classic is one of the best books ever written about the making and release of a film, as it chronicles how people who simply thought they were making a low-budget exploitation film wound up breaking several taboos of cinema without even realizing it. The film got an unsuccessful test run under such titles as Krug and Company and Sex Crime of the Century, but after changing its name to Last House on the Left and being released with one of the most famous taglines ever (“To avoid fainting, keep repeating: It’s only a movie… only a movie… only a movie…”), it suddenly became a huge box office hit and one of the most controversial motion pictures anyone had ever seen. In a wonderful piece of irony, many people who were repulsed by the violence in Last House responded by threatening violence against the theaters who dared to show the film! Watching Last House today, one might wonder how anyone could get so riled up about it, but this was showing audiences a side of human nature that they just did not want to see at the time. Looking back on it now, it was quite daring for Last House to kill off its heroines halfway into the film and then present the second half from the point-of-view of some incredibly evil, repulsive characters. However, Krug and his gang are a really effective, well-developed collection of villains who are sometimes quite funny and strangely likable when they’re not committing rape and murder, and perfectly demonstrate the movie’s message that the worst acts of violence can sometimes be committed by seemingly normal human beings. For my money, the most stunning sequence in the film is when Krug rapes and murders Mari and goes so far over the line that he winds up even repulsing himself. This is one of the most disturbing death scenes you will ever see in a film, but it’s also one of the most emotionally powerful.

The quality of the acting in Last House on the Left has always been subject to debate, but for the most part, I think it’s quite strong. Sure, the actors playing the parents and the cops aren’t very good, but the film features very effective performances from Krug & Company and the two heroines. Lucy Grantham and Sandra Cassel (who was apparently legitimately terrified during most of the shoot) are heartbreakingly believable during the scenes where they’re being tortured and murdered and bring a disturbing amount of realism to the proceedings. Of course, David Hess makes one of the memorable screen psychos of all time with his convincing performance as Krug and gets able support from the actors playing his gang. Fred Lincoln (who would go on to become a very prominent adult film director) does particularly impressive work as Weasel, a character who seems like a comedic goofball on the surface, but is capable of making a chilling transition to violent psycho. In spite of my initial skepticism, I actually did like the 2009 remake of Last House on the Left, which is definitely a much better made film from a technical perspective, and retains a lot of the original’s intensity. However, the main reason why I didn’t think the remake was as good as the original is because the villains were not quite as well-rounded and memorable. Garret Dillahunt did a very solid job in the role of Krug, but he really couldn’t measure up to the late, great David Hess. However, I really couldn’t begrudge anyone if they preferred the Last House on the Left remake because the original film is certainly an acquired taste. While it’s easy to see why people would be so shocked by this film in 1972, viewers today might wonder what the big deal is, and be put off by its unusual music score, silly comic relief, and sloppy direction. It’s a definite “love it or hate it” film, but I personally do love it, as it left quite an impression on me when I first saw it at the age of 17 and have never seen anything quite like it ever since. Even if you’re not a fan of the film, you still have to respect The Last House on the Left for breaking a lot of new ground and give it its due for being the influential horror classic that it is.