Basic Story Line
Superman must stop the Spider Lady, the queen of the underworld, from stealing a new, powerful ray gun from the military.

Superman is the first and most famous of all superheroes. In recent years he has suffered from a decline in status. Here, however, we see him near the heights of his popularity. 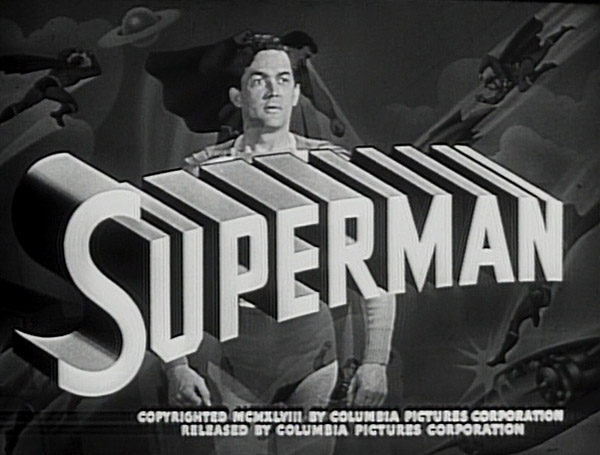 Superman was created during the depression by Jerry Siegel and Canadian-born Joe Shuster. In the beginning, he was a crusader for social justice, beating up criminals and crooked landlords. He became one of the first characters to have an entire comic book dedicated to him. He got his own radio show and his animated shorts were nominated for an Academy Award. Republic wanted to acquire the rights to make a Superman serial in 1941 – this would have made him the first superhero on film – however talks broke down between Republic and National Comics, and that honour went to Captain Marvel. When Superman did make it into the serials, it became the highest grossing serial ever. Over the years that followed there were films, television, books, and merchandising. Although he never left the public consciousness he did start to fade in popularity in the 1990’s and the 2000’s. The fact that the last Superman movie was delayed by about 10 years due to a revolving door of potential writers, directors, and cast, made the hero the butt of many jokes. When it finally was made, it went mammothly over budget, and in the end was only decent movie. Hopefully, the new Superman movie, scheduled to come out in 2012, will restore some of the Man of Steel’s prestige, but until then, let’s look at happier times for our hero.

The success of this serial is in no small part due to its cast. Kirk Alyn is an ideal choice to play Superman. Not only is he a good actor, with a career in both serials and on Broadway, but he is also a ballet dancer. This, allows him to play the superhero with athleticism and grace. It also means he can move confidently in tights. Kirk makes Clark Kent vulnerable and bumbling without becoming cartoonish.  He is, unfortunately, not credited in the serial. The studios marketing strategy involved claiming that they could not find an actor good enough to play the hero, so they got Superman to play himself. Lois Lane is played by Noel Neill, who would reprise her role opposite George Reeves in the 1950’s television series and whose father actually was a newspaper reporter. Although Lois is often the damsel in distress, Noel plays her with spunk and determination, never making Lois seem weak or helpless.

All good serials need a good villain and Superman goes up against Carol Forman as the Spider Lady. Her secret lair is under a mountain and has a magnetic web that electrocutes her victims. Unfortunately, they have a bombshell in a slinky black dress as their villainess, but they never have her use this sex appeal to her advantage. Instead of having her use her charm to turn men to jelly at her feet, she simply bullies her henchmen and threatens her captives.

In 1941, Republic had already figured out how to make a man fly in their serial, Adventures of Captain Marvel. However Columbia, the production company doing Superman, was unsatisfied with the effects they had. Instead, for the flying scenes, they replaced Kirk Alyn with an animated Superman. Although at first this is a little jarring, and many of Superman’s young fans were disappointed at not really seeing Superman fly, I find it a novel solution that allows them to do much more with the flying sequences than what could have been accomplished by having Kirk Allen on wires.

The script itself is uneven at parts. The weakest point in the script is the opening chapter. In twenty minutes they try to cram in the destruction of Krypton, Superman’s origin story, Clark growing up, leaving home, and his first adventure as Superman. There are also the usual flaws you find in most serials; predominantly these involve people doing stupid or contrived things just to keep the plot moving along. If the opening chapter is the serial’s weakest point, the closing chapter is one of its strongest. The resolution involves  Superman using his two weaknesses, kryptonite and lead, to his advantage, and the Spider Woman being destroyed by her own devices.

Although hardly perfect, the Superman serial does capture the fun and adventure that are the hallmarks of any good Superman story.

Things to watch for
-Try to find Kirk Alyn’s name anywhere in the serial.
-One chapter ends with the thugs having a conversation and then shooting a box that supposedly contains Jimmy. The next chapter starts with them shooting the box and then having the conversation.

The Back Row Weekly Serial Drinking Game
While watching a serial, anytime you or a friend point out a plot hole or inconsistency, take a drink. (Note: The fact that the Spider Woman does not want to kill Lois in her lair, is not a plot hole or inconsistency. The fact that she says this just after she kills another guy in her lair, is.)
Odds of getting sloshed: Medium

I am now approaching the end of the serials I currently have access to. Not to worry, those 50 or so of you who follow my ramblings on a semi-regular basis, I plan on getting my hands on more soon. However, if any of you have any suggestions on serials you think I should review, let me know.