The Back Row’s Weekly Serial Review: Atom Man vs. Superman 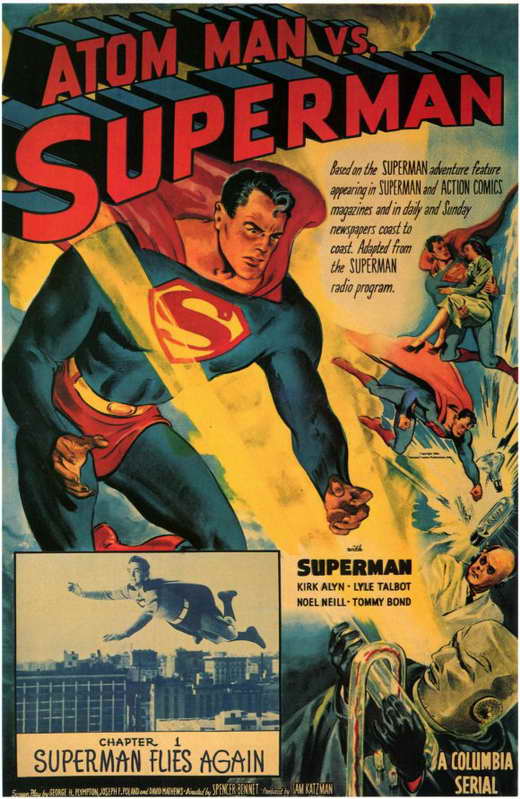 Basic Story Line
The mysterious Atom Man has been using a series of high tech gadgets to commit a string of robberies in Metropolis. Superman suspects that the man behind the crimes is none other than Luthor.

When I look back at my revues of serials like Undersea Kingdom, Radar Men from the Moon, or Batman and Robin, I wonder if I’m too hard on them. They are, after all, made for children, and kids would enjoy them. Then I watch something like Superman, or Atom Man vs. Superman, and I realize what a good serial is.

The story is thought through, and moves forward. Unlike Undersea Kingdom or Radar Men from the Moon, the narrative is thick enough to sustain itself over a full serial. We don’t have our heroes repeating the same scenario multiple times just to fill another chapter or two. Our characters do not embark on pointless adventures that do nothing for the plot. They also don’t try to cram some ridiculous twists into the last few chapters of the serial. The writers put together a story that proceeds logically from the beginning to the ending.

As I have said many times, a good serial needs a good villain. In this serial we have Lyle Talbot playing Luthor. In the 1950s Lex Luthor was not the evil businessman he is today. Luthor’s original incarnation was an evil scientist. A mad scientist, whose alias is Atom Man is the perfect villain for the 1950s when the world has just found out how powerful an atom bomb is and is worrying about a possible war between two nuclear powers. His goals are simple and make sense; Luthor is after the money. The plan he uses to obtain the money makes sense. Where the writers fall down is that they don’t seem to be sure whether or not they are trying to keep the fact that Luthor is Atom Man a secret from the audience. Atom Man is in Luthors secret lair. He uses Luthors inventions. He works with  Luthors henchmen. At the same time, however, we never see him changing into the Atom Man disguise. He and no one else ever refers to himself as Atom Man. Also, anytime Luthor is acting as Atom Man he has the disguise on, even when there is nobody else around.

The science in Atom Man vs. Superman fits into the fantasy world they created. They give us only as much as we need and we are rarely asked to buy more than we are suspension of disbelief is willing to accept. In Batman and Robin, the villain steals a machine that runs on diamonds and that’s purpose seems to vary throughout the serial. It starts out as something that can remotely control vehicles but as the serial goes on it can cause them to burst into flames, paralyze humans, dematerialize objects, and turn a person invisible. In Atom Man vs. Superman, Luthor does a variety of equally if not more extraordinary things but it is established as a scientific genius with a lab full of neat gadgets and he is not relying on a single invention to do everything. (And not one of his inventions runs on diamonds.)

There are other aspects of the story the writers have thought through. They realize that if Clark Kent has been working for the Daily Planet for a couple of years, by now, people may start becoming suspicious that he is Superman. Once again they have Superman use his weakness to his advantage. In this serial Clark uses a synthetic kryptonite that loses its power over time to convince his friends that he is not Superman.

I have yet to find a perfect serial. By its very format serial are often redundant, or have gaping plot holes. However, Atom Man vs. Superman proves that just because a serial is aimed at children doesn’t mean it has to be substandard.

Things to watch for
-The same shots of Clark changing into Superman that were used in the first serial
-Kirk Alyn’s name can still not in the credits
-Luthor relays the Superman origin story often using the same lines as the narrator in the first chapters of the original serial.
-Luthor’s “Main arch” has neon lights in the shape of microphones.

The Back Row Weekly Serial Drinking Game
While watching a serial, anytime you or a friend point out a plot hole or inconsistency, take a drink. (Note: During an apparent assassination attempt on Luthor, Clark, saves his life. This would not be a plot hole, except that it is hinted that Luthor staged it and it is never revealed what Luthor would have done if Clark had not used his x-ray vision to see the gun.)
Odds of getting sloshed: Medium