The Back Row’s Weekly Serial Review Essay: The Bad Guy Bites It 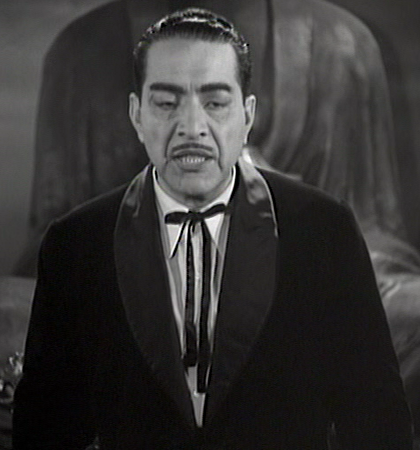 This week I’m going to do something a little different on The Back Row’s Weekly Serial Review. I’m not actually going to review a serial.

When I started writing these reviews I had the idea that I would begin each review with a short paragraph on serials in general before getting to that week’s review. That lasted 8 weeks. By week 9 I realized that I had already said most of what I had to say, and these blurbs were detracting from the article. However, having now reviewed 23 serials on The Back Row I think it is time I had a look back at what I have witnessed in the first Back Row’s Weekly Serial Review Essay. This week we look at the bad guys, and more specifically, how they get their comeuppance in the end. So, think of this article as one great big SPOILER!

Some examples of the first category are Batman and Robin, Atom Man vs. Superman, and The Crimson Ghost.

Category number two is the more satisfying of the three endings. It is also the ending favoured by most Disney villains. In this category we have Red Ryder. The villain in Red Ryder tries to cut a rope bridge and drop Red into a canyon, only to find himself on the bridge when it gives away. In Batman, Dr. Daka falls into his own alligator pit while trying to escape. The Spider Lady, in Superman, is ensnared by her own electric web. In Buck Rogers it is a cross between 1 and 2. Killer Kane is captured alive but he has his own amnesia helmet put on him. The Phantom Empire also has an ending that is a cross between category 1 and 2. The people of Murania are killed by their own weapon, but above ground, the evil scientists are exposed and captured.

Now we come to ending number three; killed by a third party. Often this is the least satisfying way to dispose of your villain. In The Green Hornet the bad guys kill each other. Sticking with the green theme, Bellamy, in The Green Archer, gets shot by a nervous cop while trying to escape. Ming, in Flash Gordon’s Trip to Mars, gets killed by his own henchman. Not all of category 3 endings leave you unsatisfied. In Zorro Rides Again, and Zorro’s Black Whip, the horse steps in to defend our hero by trampling our villain to death. In Dick Tracy, the villain alters Dick’s brother’s mind, but Gordon Tracy starts to regain some of his memories. While speeding away with the villain he has a moment of his former humanity, swerves to avoid some pedestrians, and drives the car off a cliff.

There are exceptions to every rule. Not all villains’ end fits into one of these three categories. In the first Flash Gordon serial, Ming commits suicide rather than be caught. In some cases our hero really does kill our villain. Commando Cody blows up the Moon Men’s rocket as they are trying to escape, in Radar Men from the Moon. In Flash Gordon Conquers the Universe, Flash kills Ming by flying a rocket into the tower Ming is hiding in.

When you’ve watched enough serials a fourth category does suggests itself. This category is of course, falling. Whether it is off a cliff, into a canyon, a fiery pit, or an alligator cage, many villains tend to die falling. So, should you ever decide to become a serial villain, remember, underground lairs, avoid cliffs and volcanoes, and don’t keep your man eating pets in pits unless you keep the pit door tightly closed at all times. Also, don’t mistreat your henchmen. They work hard for you and if you push them too far they may just kill you.