Before They Were Stars: Vinnie Jones in “Soccer’s Hard Men” 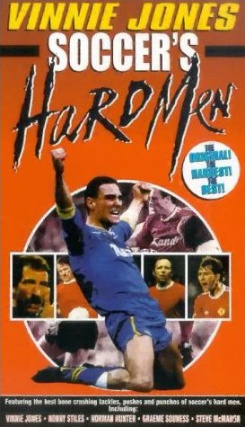 To celebrate Vinnie Jones’ birthday today, I thought you might like to see him grabbing another man’s balls in Soccer’s Hard Men. *awkward silence* No, it’s not what you think! European visitors to The Back Row may not consider this a “Before They Were Stars” feature since Vinnie Jones is one of the most infamous footballers/soccer players of all time, but let’s face it, most North Americans just don’t follow the sport and had no idea who he was until he broke into movies. Anyway, in 1992, Jones hosted a video called Soccer’s Hard Men, which showcased some of the toughest and most violent players in the game, including himself. The Professional Footballers’ Association was none-too-pleased about this and thought that the video glorified dirty play, so they tried to have it banned and hit Jones with a massive fine and suspension. Of course, the massive controversy only made Soccer’s Hard Men a very popular bestseller in Britain. Anyway, here’s the video’s profile on Vinnie Jones and, yes, you do get to see him grab an opposing player’s crotch!