The Back Row’s Weekly Serial Review: The Phantom 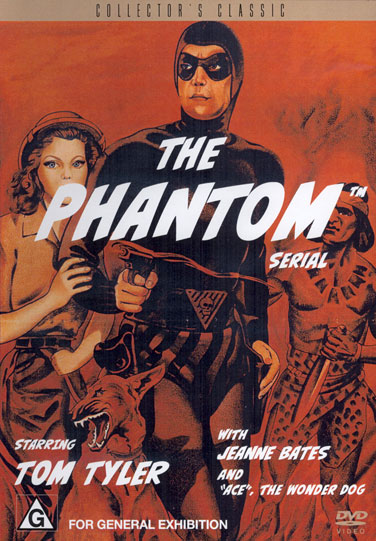 Basic Story Line
Godfrey Prescott has been called to take the place of his father as, The Phantom, the guardian of the jungle, just as a group of unscrupulous criminals try to use the natives to build an air base.

The Phantom is a good serial that holds together well and probably fell into obscurity do to a lack of popularity of its main character in North America.

The Phantom was created by a writer named Lee Falk in 1936, as a cross between Zorro and Tarzan. He was one of the first masked vigilante heroes in the comic strips. He predated Batman by three years and came out the same year as the Green Hornet. As far as comic book heroes go, Lee Falk put thought into the Phantom’s lore. The title and responsibilities of The Phantom are handed down from father to son, creating the legend of a man who never dies. The first Phantom was the sole survivor of a pirate attack in 1536, and swore to fight piracy in all forms. The Phantom has been on television, movies, in comic books, novels, and apparently, in 1985 there was a musical based on the character in Sweden. (Making him the fourth superhero I have heard of to have his own live musical)

I have yet to see a serial that didn’t have cheesy dialogue, predictable stories, characters who keep doing stupid things, and an anticlimactic ending. The Phantom is no exception. That being said, however, The Phantom is pretty good. It is set in an exotic location. There are booby-traps. The Phantom is cool. The serial has the added bonus of a trained German Shepherd as a character. Most importantly though, unlike most serials, the story doesn’t lose steam around the half way mark. When most serials start becoming redundant, or ridiculous, The Phantom keeps an even pace, moving the story forward. There are only two issues I take with the script. First, every chapter has the henchmen telling their boss that they killed the Phantom, and every chapter the Phantom comes back. You would think, eventually, they would learn to check for a body. The other issue I have with it is that the ending happens suddenly, and is even more anticlimactic than usual for a serial, with the villain being either killed, or just knocked out, behind a puff of smoke.

There aren’t many men who can pull off a body suit confidently. Most of the superhero suits were designed to look good on paper not necessarily on a real person. Krik Alyn, a former ballet dancer, pulls it off with the Superman serial. Tom Tyler, a three time weightlifting champion, does it in Captain Marvel and again here as The Phantom.

Our hero lives on a fictitious jungle island whose location is deliberately vague. His secret lair is the Skull Cave and he uses illusions and magic tricks to propagate the myth among the native tribes that he is a mystical being. This leads us to the race issue. The premise of The Phantom is very colonial. He is the white ruler who looks after the ignorant natives. The jungle would fall into chaos if it wasn’t for his wise and benevolent leadership. It is condescending but should be taken in context of the time.

Although flawed, The Phantom is an entertaining serial. It’s not quite as good as the Superman serial, but it is well worth the watch for comic book and serial fans.

Things to watch for
-Padding on the arm of a stuntman fighting with the dog.
-A rear screen projection of a crocodile attacking The Phantom
-An African lion and an Indian tiger
-Frank Shannon, most famous for playing Dr. Zarkov in the Flash Gordon serials, plays Professor Davidson.

The Back Row Weekly Serial Drinking Game
While watching a serial, anytime you or a friend point out a plot hole or inconsistency, take a drink. (Note: Henchmen claiming that once again they have killed The Phantom is not a plot hole. The boss not insisting on seeing the corpse, is.)
Odds of getting sloshed: Medium