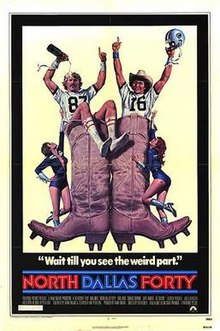 Well, the 2012 Super Bowl has come and gone, and once again… I mostly felt nothing but complete indifference towards it. I am a fan of a lot of sports, but football just isn’t one of them and I’ve never really gotten its appeal. However, there are quite a few football movies out there that I enjoy and I suppose that it’s only appropriate that one of the best football flicks I’ve ever seen features very little actual football! Simply put, North Dallas Forty is a sports movie for people who don’t like underdog formula sports movies, and that might be why it’s not as well-known amongst modern audiences. The film is based on a 1973 bestselling novel by Peter Gent, a former wide receiver who played five seasons for the Dallas Cowboys. Even though the story in North Dallas Forty is a work of fiction, it was obviously a semi-autobiographical account of a typical week in his playing career and an expose of what he believed to be an exploitation of players by the National Football League. With the multi-millionaire salaries that NFL players are making today, it is easy to forget that players did not always get paid a lot of money to do serious damage to their bodies. North Dallas Forty is a harrowing, but often funny look at the physical and mental price one has to pay to be a pro football player.

The opening title sequence of North Dallas Forty presents a startling depiction of the life of a football player when he is away from the spotlight and reminds the viewer that they are not invincible supermen. The story’s protagonist is an aging wide receiver named Phil Elliott (Nick Nolte), and his introductory scene shows him struggling to get out of bed in the morning because of all the injuries he has sustained throughout his career. Phil plays for a team called the North Dallas Bulls and although he is still a very solid player on the field, he has to rely heavily on painkillers to keep going and remain competitive his younger counterparts. While Phil is great friends with the team’s star quarterback, Seth Maxwell (Mac Davis), he is also constantly at odds with the team’s management and coaching staff, unhappy that they have turned the game he loves into a business. The head coach, B.A. Strother (G.D. Spradlin), wants his players to follow a rigid formula on the field and hates it when they deviate from it in any way, and he often enables his hot-tempered assistant coach, Johnson (Charles Durning), to pressure the players into using painkillers to play through debilitating injuries. Because Phil’s rebellious attitude is not popular with the people in charge, it is obvious that he needs to continually put his body on the line and deliver on the field if he wishes to maintain his career.

To say that North Dallas Forty doesn’t follow the traditional formula of a sports movie would be an understatement. This is not an underdog story, and there are only a few minutes of actual football action in the entire picture. Oliver Stone’s Any Given Sunday was intended as an eye-opening expose at the world of pro football and while it dealt with a lot of the same issues presented here, it still followed the traditional formula of climaxing with a big game. North Dallas Forty cares less about the big game and more about the day-to-day structure of a football player’s life and how they live out their week between Sundays. Most of the players live a constant lifestyle of drug, alcohol, sex and partying, and it becomes obvious that the coaches and management will turn a blind eye to their deviant behaviour if it helps their performance (which would explain why football players seem to get in more trouble than any other athletes). One of the best characters in the film is a large lineman named Jo Bob (Bo Svenson), a violent brute whose erratic behaviour off the field is constantly encouraged and enabled by the team because it fuels his aggressive play on the field. The players are constantly exploited and asked to put their bodies through hell, but will just be tossed aside once they’ve outlived their usefulness. The most famous moment in North Dallas Forty is probably this angry monologue from real-life NFL star John Matuszak, who was known for being one of the most notorious “bad boys” in the league, and is best known to film fans for playing the role of Sloth in The Goonies.

Sadly, John Matuszak would eventually become a real-life example of the dangers of living this lifestyle, as his many years of constant partying, painkillers and other drugs led to his premature death via heart failure at the age of 38. The character of Phil Elliott represents someone who could easily be headed down this same path and by the end, he is forced to face the painful realization that he has sacrificed his body for people who just don’t appreciate it. Nick Nolte is outstanding in this role, but he gets solid support from the entire cast, particularly G.D. Spradlin, Charles Durning, Bo Svenson and Mac Davis, a country singer who had never acted before this film, but does a surprisingly good job as the likable Seth Maxwell. The description I’ve given of North Dallas Forty probably makes it sound like a very sad and depressing film, but it’s actually quite funny at times and works pretty well as a satire. Because of Peter Gent’s first-hand experience with the subject, the locker room atmosphere and camaraderie amongst the players in this film is very convincing and believable. After all, people wouldn’t be willing to get into a sport as punishing as pro football in the first place if they weren’t going to have a lot of fun in the meantime. Because North Dallas Forty doesn’t follow a traditional sports formula narrative, its plot does tend to meander at times, but that often gives the proceedings a documentary-like atmosphere. Even if you dislike formula sports movies, North Dallas Forty will probably still appeal to you because it eschews the clichés of the genre, providing a peek behind the curtain at what the life of a football player is really like.