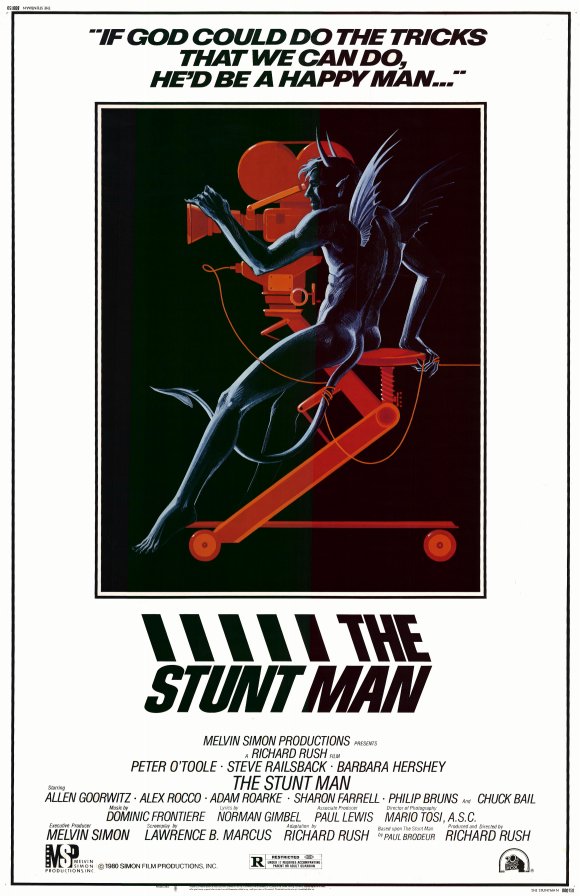 If you look over the entire history of the Academy Awards, I’m sure you won’t find too many examples of a filmmaker earning a “Best Director” nomination and then not directing another film for fourteen years! How does something like that happen? Well, when you direct a critically acclaimed film that sits in limbo for a couple of years because the studio didn’t know how to market it, it’s easy to become quite disillusioned with the movie business. Such was the case with director Richard Rush and his movie, The Stunt Man. In this week’s Shouts From the Back Row podcast, we discussed some of the greatest movies ever made about moviemaking and The Stunt Man is definitely one of the most unusual, to say the least. I can almost understand why the studio had such a hard time marketing it because trying to analyze it will not be an easy feat either. This is not a film that you can describe in one simple logline, nor does it fall into one particular genre. Based on a novel by Paul Brodeur, The Stunt Man is a very unique mixture of action, comedy, drama and surrealism. You could almost say that it was way ahead of its time because it was meta before meta was cool. However, there is one line of dialogue from The Stunt Man that was used on the poster, which I believe summarizes the movie perfectly: “If God could do the tricks that we can do, he’d a happy man”. The main theme of The Stunt Man is “perception vs. reality” and it uses the clever plot device of a “movie-within-a-movie” to drive home the point that you can’t always believe what you see. Even if you don’t completely understand The Stunt Man and are unsure what to make of it after it’s over, it’s still a very entertaining and fascinating experience.

The riveting first act of The Stunt Man follows a disheveled Vietnam veteran named Cameron (Steve Railsback), who is a fugitive from the law for yet-to-be-explained reasons. While escaping from the police, Cameron runs onto a bridge where he crosses paths with a man driving a vintage Dusenberg and accidentally causes the car to crash into the river. Cameron soon discovers that he is being watched by a mysterious man in a helicopter and flees again. He eventually winds up on the set of a World War I movie and finds out that the man in the helicopter is Eli Cross (Peter O’Toole), the director of this epic production. It’s gradually revealed that the helicopter was filming the Dusenberg on the bridge to perform a major stunt for the movie and that Cameron inadvertently caused the stunt driver’s death when the vehicle crashed into the river. The local police investigate the incident and want to shut down the production, but because the stunt man’s body is never found, Eli comes up with an ingenious solution: he pretends that Cameron is the stunt driver and that he survived the crash. He then offers Cameron a deal: take the dead stunt man’s place and perform the rest of the movie’s stunt sequences, and he won’t turn him over to the police. Of course, Cameron has little choice but to accept the offer, but in spite of having no formal stuntman training, he is asked to participate in the most dangerous and elaborate stunt sequences possible. Cameron begins to suspect that there is no possible way that he can survive these scenes and that Eli wants to kill him and capture his death on film.

The actual stunt sequences showcased in the film are pretty spectacular, but also add to its surreal quality. We know that a lot of planning, choreography and visual trickery must have been required to shoot the stunt sequences in The Stunt Man, but the stunt sequences for the film-within-a-film all seem to be perfectly choreographed and shot in one take, with Cameron pretty much winging it as he goes along. Of course, we all know that no movie stunt sequence would ever be shot like this in real life, but that only adds to this film’s “perception vs. reality” theme and furthers the idea that the director may be completely insane. There have been a lot of fictitious directors portrayed in the world of cinema, but few of them have ever been more fascinating than Eli Cross. Eli is portrayed as a very eccentric, larger-than-life figure who can be very charismatic and charming at times, but can also come across as a complete megalomaniac that is willing to do whatever it takes to complete his film. It is entirely believable that Eli would be willing to have Cameron killed for the sake of the movie, especially after Cameron becomes romantically involved with the movie’s star, Nina Franklin (Barbara Hershey) and discovers that she was once romantically involved with Eli. One piece of information that Eli is constantly reciting throughout the film is that “King Kong was just three feet tall” to drive home the point that movies can use visual trickery to mess with your perception of reality. The idea of telling the story from the point-of-view of an outsider who wanders onto a movie set and becomes involved with the production is a fairly ingenious one. The audience is never allowed to learn any more information than Cameron knows, so even though it is possible to perceive that Eli might be a homicidal lunatic, you never know if his perspective is a reliable one. Peter O’Toole claims that he based the character of Eli Cross on his experiences with director David Lean, and he is delightful in the role, always keeping the viewer on edge and never allowing you to figure out Eli’s true motivations.

While O’Toole completely steals the picture, he does get solid support from the entire cast, particularly Steve Railsback. After seeing Railsback’s frightening portrayal of Charles Manson in the TV mini-series, Helter Skelter, Richard Rush reportedly turned down several big-name stars for the role of Cameron in order to cast him. Railsback brings the same unhinged intensity to Cameron that he brought to his portrayal of Manson and since the movie purposely keeps us in the dark about what crime Cameron actually committed to become a fugitive, you always wonder if HE might be the one who’s batshit insane! Peter O’Toole’s terrific performance earned him an Academy Award nomination for “Best Actor”, and the film was also nominated in the “Best Director” and “Best Adapted Screenplay” categories. However, at the time, The Stunt Man was probably one of the most little-seen films to ever garner multiple Oscar nominations. Even though the film was completed in 1978, it sat on the shelf for two years and was not picked up for distribution by 20th Century Fox until 1980. After you watch The Stunt Man, I highly recommend checking out Richard Rush’s documentary, The Sinister Saga of the Making of “The Stunt Man”, in which he details the horror stories of getting his film released. Peter O’Toole always likes to remark that “the film wasn’t released, it escaped”, as numerous executives would tell Rush that they thought the movie was a masterpiece, but didn’t want to distribute it because they had no clue how to market it. In spite of all the critical acclaim Rush achieved for The Stunt Man, he did not direct another film until 1994 when he made the infamously bad Bruce Willis erotic thriller, Color of Night, before quietly fading away into retirement. Because it is such a difficult movie to summarize for the average viewer, The Stunt Man remains a very underrated cult film and has never found a large audience. It may take multiple viewings to fully appreciate it, but it remains one of the most interesting movies about filmmaking ever made. If you’re willing to watch a film that forces you to analyze the very act of watching a film itself, I’d advise you to give The Stunt Man a chance.