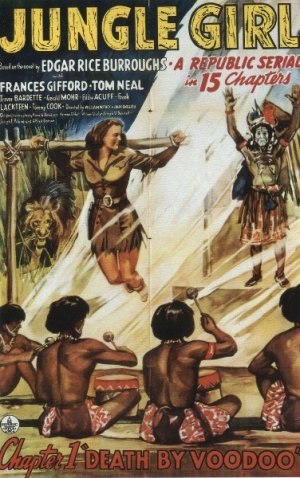 Basic Story Line
A fortune in diamonds is hidden in an ancient African temple. Our heroes, Nyoka, a woman raised by her father in the jungle, and Jack Stanton, a young pilot, must do battle against a gang of unscrupulous treasure hunters.

The serial Jungle Girl is pretty good. It is, however, a bit of a let down. When you have  a serial that proudly boasts to be based on an Edgar Rice Burroughs story, is directed by Witney and English, is referred to as “The best of all jungle serials” and, lets face it, is named, Jungle Girl – with chapter titles like, Death by Voodoo, River of Fire, and Jungle Vengeance – you expect something more than just pretty good.

The Edgar Rice Burroughs story was first published as a five part series entitled, The Land of Hidden Men. It was then republished in book form under the sexier title Jungle Girl. Apparently in subsequent republishings it has gone back to its former title. The serial Jungle Girl had a shooting schedule of 45 days. When you consider that some serials were shot in under two weeks, 45 days seems almost excessive.

Serial stories are always action based and very simple. You need to keep it simple so that if someone misses a few chapters they can pick up the story without any troubles. That being said, I guess I shouldn’t be surprised that Jungle Girl is no different. I was, however, fooled into believing that there might be more to this serial because of its claim to be based on a Rice Burroughs story. It turns out that the only similarity between this and its namesake is, well, the name. Which is a shame because I’ve read the plot summary of the novel and it sounds like it would have made an amazing serial, filled with warring tribes, chases, daring rescues, escapes, and plot twists. What we have is a story about bad guys trying to steal diamonds and good guys trying to stop them.

Jungle Girl is also…how should I put this? Slightly less than politically correct. The natives are stereotypes. They are either evil or subservient. All of them are ignorant and easily fooled. Both the heroes and the villains plan on taking the diamonds for their own purposes, without even bothering to ask. The natives have one of the stupidest methods of choosing their leaders. The person who has a small lion statuette is in charge. It doesn’t seem to matter who he is or how he gets it, everyone bows to him. It is the type of over the top stereotype that makes you wonder in the first chapter  “What am I watching?”

Witney and English have directed some of my favourite serials, including Zorro’s Fighting Legion, and Adventures of Captain Marvel. The clichés and the treatment of the natives should be viewed in context of the time period and the medium. If you don’t worry about the story, or being politically correct, Jungle Girl is fun to watch. The production values are very good. Frances Gifford swings thorough the jungle on vines, dives off cliffs, rides an elephant, and fights lions. I guess I just expected more. (That was probably foolish of me.)

The Back Row Weekly Serial Drinking Game
While watching a serial, anytime you or a friend point out a plot hole or inconsistency, take a drink. (Note: Yes, the fact that the same two levers work everything in the temple is a plot hole, so is the fact that they get broken off in one chapter but are back in the next.)
Odds of getting sloshed: Medium