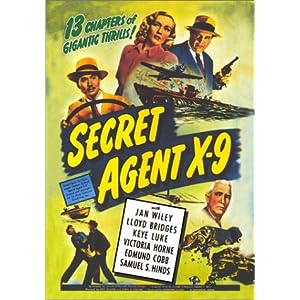 Basic Story Line
During the Second World War the Japanese are planning on stealing a formula for making synthetic jet engine fuel. Secret Agent X-9 and a handful of spies from allied countries have banded together to stop them.

Although it is vastly different from the 1937 serial and from what Dashiell Hammett had originally envisioned as the comic strip, the 1945 serial is still representative of the Secret Agent X-9 character and fun to watch.

Secret Agent X-9 was originally a comic strip written by detective novelist Dashiell Hammett and drawn by Alex Raymond. Hammett left the strip after only a year when the publishers started interfering with the scripts. Alex Raymond left shortly afterwards. The new writer changed the character from a Dick Tracy-style detective to more of a James Bond. (About 10 to 15 years before Ian Fleming created James Bond.) That espionage adventure story is what this Secret Agent X-9 is based on.

While the 1937 serial had more plot and mystery, this version is filled with interesting characters, some strong performances and lots of action. (Including a climactic scene that involves the entire island that this serial is set on being carpet bombed.) You know who the good guys are, you know who the bad guys are, and, although X-9 doesn’t know what the Japanese are planning, the audience does. Although none of the characters have the layers of Jean Rogers and Monte Blue’s characters in the first serial, some clever writing and strong performances give us some very likeable characters. Cy Kendall plays Lucky Kamber the business man who runs the island with a delightful amount of confident, self-serving neutrality. Samuel Hinds plays an old barfly who is aware of everything that is going on around him but can’t be bothered to get off his seat to do anything about it, even when gun fights break out around him. Lloyd Bridges plays the title role. While most leading men in serials are forgettable, Lloyd brings charisma to the part.

An important note is the portrayal of Asian characters. It is a World War II American serial, so the Japanese are not going to come off looking good. Our villainess and many of the secondary villains are played with all the stereotypes you would expect. However, the main henchman is an Asian actor, named Clarence Lung, who plays his role admirably while avoiding many clichés. We also have Keye Luke playing Chinese agent Ah Fong, one of X-9’s partners. For me, Keye Luke is best known as playing Kato in the Green Hornet serials. Keye Luke plays Ah Fong with intelligence and humour. He is also written as X-9’s equal, saving our hero as many times as he is saved.

Although I wouldn’t say that the 1945 serial is better than the 1937 Secret Agent X-9, it is an entertaining serial and well worth the watch.

Things to watch for
-A new take on the dropping floor cliché
-Keye Luke speaking French
-Most of the international spies speak with an American accent
-The Allies refer to them selves as the United Nations, before the United Nations existed

The Back Row Weekly Serial Drinking Game
While watching a serial, anytime you or a friend point out a plot hole or inconsistency, take a drink. (Note: Yes, a secret agent carrying around I.D., with both his name and his code name, is worth a drink.)
Odds of getting sloshed: Medium