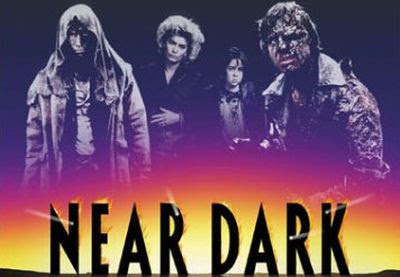 We just recorded our Shouts From the Back Row podcast about vampire movies, so I think it’s about time that “Robin’s Underrated Gems” provided a long overdue analysis of what is undoubtedly the greatest teen vampire love story of all time. This story was written by a very talented and successful woman and… guess what? I ain’t talking about Stephenie Mayer! I’m sure that if you follow The Back Row, it won’t be too much of a shocker to hear just how much contempt we hold for the Twilight series and we probably don’t have to list all the reasons why. However, it’s not that we think a teen vampire romance is a bad idea. We’d just prefer to see it as part of a story which doesn’t skimp on the horror elements. In 1982, Kathryn Bigelow co-directed a biker movie called The Loveless, but it wasn’t until five years later that she finally got her breakout project. Bigelow had interest in directing a Western, but found it impossible to obtain financing since pretty much everyone told her that the genre was dead. It was suggested that she attempt to combine the Western with another genre which was more popular at the time, so she teamed up with screenwriter Eric Red (who had just come off of writing the classic Rutger Hauer horror flick, The Hitcher) to write Near Dark, a vampire story with Western elements. The film was released only a few months after the success of The Lost Boys and was pretty much overshadowed by it, so as a result, Near Dark performed poorly at the box office. The fact that it was the last film to be released by DeLaurentiis Entertainment Group just before they went bankrupt probably didn’t help much either. However, the film has built up a sizable cult following over the past 25 years and time has proven it to be one of the best vampire movies ever made.

Near Dark takes place in rural Oklahoma and is told from the point-of-view of a teenage farm boy named Caleb (Adrian Pasdar). Caleb is hanging around town one night when he comes across a pretty young girl named Mae (Jenny Wright). They seem to be hitting it off quite well until sunrise hits and Mae starts to get very panicky. She then proceeds to bite Caleb on the neck before running off, and once the sun comes up, he is surprised to discover that his flesh is starting to burn. Caleb is soon kidnapped by a small group of drifters who plan on killing him until Mae reveals that she has bitten Caleb and wants him to become a part of the group. It becomes clear that these drifters are a “family” of vampires who travel the country looking for victims to feed on. They are lead by the charismatic Jesse Hooker (Lance Henriksen), and consist of his lover, Diamondback (Jenette Goldstein), the psychotic Severen (Bill Paxton), and a young boy named Homer (Joshua John Miller). Caleb refuses to believe that he’s been turned into a vampire and wants nothing to do with this group, but when he attempts to escape, he finds himself becoming physically ill and starts to resemble a heroin addict going through withdrawal. It becomes obvious that Caleb now must feed on human blood in order to survive, but the only problem is that he just cannot work up the will to kill an innocent person. Mae covers for Caleb for awhile by feeding him some of her own blood, but the gang soon gives Caleb an ultimatum: kill someone and feed off them, or be killed yourself. Caleb must decide if his love for Mae is strong enough to surrender himself to a lifetime existence of being a vampire.

Before I continue further, I thought you might like to see the godawful cover for the Blu-ray release of Near Dark: 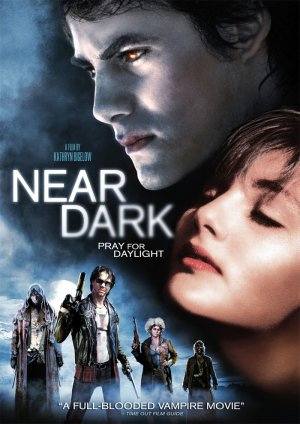 Man, they were obviously trying their damn hardest to make this movie look Twilight, but I assure, it’s anything but! One of the main reasons the vampire genre enjoyed a surge of popularity in the 1980s is because films such as Fright Night and The Lost Boys moved away from traditional Gothic vampire origins and told modern-day stories from the point-of-view of teenagers. Young audiences seemed to connect with the idea of befriending or falling in love with someone who turned out to be a vampire. If you were to fall in love with a vampire, would it be worth becoming a vampire yourself in order to spend eternity with them? Of course, we all know what Stephenie Mayer has done with THAT idea, but Near Dark handles it a lot better. Adrian Pasdar (best known to modern audiences for his role on Heroes) makes Caleb into a very sympathetic protagonist who may not be the swiftest character in the world, but is still very likable. Jenny Wright makes Mae into a likable, sympathetic heroine as well, and you can forgive the implausibility of these two characters falling so hard in love after only knowing each other for a few hours. But of course, for this story to work, the rest of the vampire characters also have to be very interesting. The other vampires in the Twilight series are so bland, boring and (if you’ll excuse the pun) bloodless that it’s tough to care about anything in the story, but Near Dark doesn’t make the same mistake. Kathryn Bigelow’s future husband, James Cameron, suggested actors who would be great choices to play the vampire clan, which is why half the cast of Aliens is reunited here. Lance Henriksen, Jenette Goldstein and Bill Paxton are all terrific and, just like in Aliens, Paxton’s colourful performance completely steals the show. While the vampires in Near Dark brutally murder a lot of innocent victims, they are not entirely unsympathetic and there’s definitely an element of tragedy to their aimless existence of travelling the country and feeding on people. The film’s standout sequence is when they enter a bar and sadistically toy with their victims in a darkly humourous fashion before killing them.

Since Bigelow initially wanted to make a Western, she does a very clever job at meshing elements from the genre into her vampire story. The aforementioned sequence in the bar is a unique variation on your typical Western barroom brawl, and the film’s climax actually involves Caleb riding his horse into the center of town for a final showdown (and discovering that hijacking a fuel truck is a more efficient way to defeat a vampire). Another incredibly clever sequence involves the vampires having a shootout with the cops from a motel room, where their greatest danger isn’t getting shot, but the bullet holes causing sunlight to enter their room. Bigelow directs all these sequences very stylishly and the film looks terrific, and the atmosphere is also enhanced by a typically great electronic score from Tangerine Dream. While Near Dark was not a box office success, it did put Bigelow on the map and showed her to have a talent for directing action sequences. Bigelow did a great job at demonstrating her skills in such films as Point Break and Strange Days, but she would not attain the full appreciation she deserved until 2009 when she directed The Hurt Locker and became the first woman to win an Academy Award for “Best Director”. Seeing the director of Near Dark at the Oscar podium provided the same satisfaction to horror fans as when Peter Jackson, who started off his career with gorefests like Bad Taste and Dead-Alive, won his Academy Award for Lord of the Rings. Somewhat inevitably, a remake of Near Dark was in development for a couple of years, but pretty much abandoned due to its thematic similarities with Twilight. Well, if Twilight lead to the demise of an unnecessary remake of a classic, then I guess it did one thing right. While it still remains underrated, the original version of Near Dark is not just a model for how to do a great teen vampire love story, but for how to do a great vampire film period!