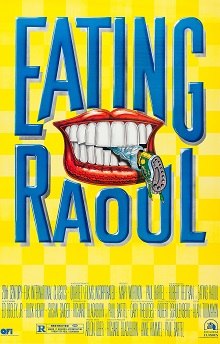 I could make a list a mile long of all the notable directors who got their first big break in the moviebusiness courtesy of B-movie icon Roger Corman, including Francis Ford Coppola, Martin Scorsese, Ron Howard, Joe Dante and James Cameron. Another director who got his start under Corman was Paul Bartel, and while Bartel never really penetrated the mainstream, he still remains a popular cult figure amongst film buffs. After earning his first directorial job for Corman with a 1972 horror-comedy called Private Parts, Bartel would go on to make his most famous film, Death Race 2000. In case you re unfamiliar with it, Death Race 2000 is a beloved cult classic that takes place in a dystopian future where one of the biggest forms of entertainment is the Transcontinental Road Race, which is based around drivers earning points by running over innocent pedestrians. This idea was treated in the form of a black comedy, and the casual, deadpan way in which Bartel presented his ultra-gory scenes of violence would define his style as a director. Bartel would direct another racing film called Cannonball!, but was unable garner funding from Corman for his dream project, Eating Raoul. Six years later, he would finally venture out to make Eating Raoul on his own. He pretty much raised the $500,000 budget by borrowing money from family and friends and shot the film whenever he could. When it was finally released, Eating Raoul became cult favourite for the same reason Death Race 2000 did: by depicting dark, gruesome subject matter in a very deadpan satirical fashion. Just imagine you’re watching a 1950s sitcom that suddenly crosses over into a universe filled with murder, sexual depravity and cannibalism, and you’ll get an idea of what Eating Raoul is like.

Eating Raoul takes place in the sleazy world of Hollywood, a place where its two protagonists, the aptly named Blands, certainly do not belong. Paul (Paul Bartel) and Mary Bland (Mary Woronov) are a married couple who act like they re still trapped in the 1950s and are about as prudish and square as you can get. Paul and Mary are completely disgusted by the sex-crazed swingers that live in their apartment building and since they sleep in twin beds, we wonder if the couple has EVER had sex with each other. Mary works as a nurse and Paul is a wine fanatic who has just been fired from his job at the liquor store. The couple hopes to leave the city and open up a restaurant in the country, but are in financial trouble and don’t have the money for the deposit on their new place. One night, a drunk lecherous creep from a nearby swingers party stumbles into the Blands’ apartment and tries to sexually assault Mary, so Paul kills him by hitting him over the head with a frying pan. After finding out that the dead pervert has a lot of money on him, the Bland dream up an inspired scheme. They place an ad in a swingers tabloid claiming that they will satisfy any sexual fantasy for a large fee, and use this to lure rich perverts to their apartment. When the pervert answers the ad and shows up, the Blands will kill him (with their frying pan, of course) and steal his money. They will continue this scene until they’ve raised enough money for the deposit on their restaurant. The Blands’ justification for their actions is that they’re doing the world a huge favour by ridding it of creepy perverts, especially when they have bizarre fetishes such as this.

You re probably wondering what the title, Eating Raoul, has to do with any of this. Well, sure enough, a locksmith/burglar named Raoul (Robert Beltran) soon becomes involved in the Blands’ scheme. He strikes a deal to sell off the corpses of the dead perverts to a dog food company in exchange for half the profits. Of course, Raoul is sexually attracted to Mary and wants to kill Paul in order to have her for himself, though this plan will eventually lead to him being eaten. Hey, you can’t accuse me of being a spoiler when the ending of the movie is right there in the friggin’ title! But for whatever reason, it just seems appropriate that a movie like this would have such a nonsensical title like that. Eating Raoul has to be the most laid-back, deadpan movie ever made about murder and sexual perversity. Most of the humour in the film is derived from how unphased the characters are by the subject matter. The movie pretty much establishes its tone in the opening scene when Paul’s boss at the liquor store shoots a robber, and then casually carries on with his conversation. Even though the ultra-conservative Blands are repulsed by sexuality that’s more extreme than hugging and kissing, their acts of murder don’t seem to bother them at all. It says a lot that the most normal-looking down-to-earth person in this story is a character named Doris the Dominatrix. Even though it’s only 83 minutes long, Eating Raoul does have a hard time sustaining its aloof, casual tone for its entire running length. Doing an entire movie this way is pretty risky since the audience could easily become as aloof as the characters and not care about anything that is going on. Yet somehow, Eating Raoul still works, and that’s probably because its bizarre approach to the subject matter is genuinely funny and provides a lot of laughs. Eating Raoul contains a lot of hilarious side characters, and John Paragon almost steals the entire movie as an obnoxious sex shop owner.

Other memorable side characters include Buck Henry as a lecherous bank manager and legendary disc jockey “The Real” Don Steele (previously seen as the announcer in Death Race 2000) as the obnoxious host of a swingers party. And those who know Edie McClurg as the dimwitted secretary in Ferris Bueller s Day Off will probably be taken aback by her brief role as a perverted swinger. Even though the Blands are presented as such straight-laced characters, you still wind up identifying with them because all the other characters they murder are SO obnoxious and perverted! Paul Bartel and Mary Woronov worked together on a grand total of 17 films throughout their careers, and just seem to have the natural chemistry and timing to make Paul and Mary likable. Star Trek: Voyager fans should also get a kick out of seeing Robert Beltran in his breakthrough role as the sleazy, but charismatic Raoul. Anyway, a couple years after Eating Raoul‘s release, Bartel attempted to do a sequel called Bland Ambition. The project was even set to star Chevy Chase, but the studio withdrew their financing ten days before production and the sequel never came to be. Bartel still directed a couple of films after Eating Raoul and made a very steady living as an actor before his death in 2000. Some of the memorable titles he appeared included Piranha, National Lampoon’s European Vacation, Gremlins 2: The New Batch, The Usual Suspects and even a cameo in Sesame Street Presents: Follow That Bird! Even though Eating Raoul remains somewhat underrated today and doesn’t have the cult following of Death Race 2000, it still has its fans. The film has been the subject of a stage musical adaptation, and Criterion has even announced that they are currently working on a Special Edition DVD of the film! Eating Raoul is certainly an acquired taste and not everything about it works, but those with a taste for dark comedy and something different are advised to check it out.