The Back Row with Extra Pulp: The Mystery of Dr. Fu-Manchu

“Imagine a person, tall, lean and feline, high-shouldered, with a brow like Shakespeare and a face like Satan, a close-shaven skull, and long, magnetic eyes of the true cat-green. Invest him with all the cruel cunning of an entire Eastern race, accumulated in one giant intellect.” In Sax Rohmer’s The Mystery of Dr. Fu-Manchu (also published under the title The Insidious Dr. Fu-Manchu) that is the first description he gives of his title character. It also tells you everything you need to know about the book: Dark, pulpy, with an almost supernatural feel to it, and sometimes with more than just a little racism.

Sax Rohmer’s real name Arthur Henry Ward and was born in 1883 in Birmingham, England. As with so many writers of pulp fiction Arthur Ward’s first career was not as a writer. He started out as a civil servant. His first career in writing was as a reporter, covering London’s Chinatown, then as a poet, comedy sketch writer, and song writer. Finally he started writing stories for pulp magazines and adopted the moniker Sax Rohmer. Thanks to Fu-Manchu, Rohmer became one of the most popular novelist of the 1920s and 30s. He was once quoted as attributing the success of Fu-Manchu to the fact that he knew absolutely nothing about the Chinese.

The Mystery of Dr. Fu-Manchu is a dark, moody detective story filled with mystery and suspense. From the fog filled London alleys, to hot, dry summer nights at a country manor house, to a tense, foreboding haunted house, each chapter oozes atmosphere. (I don’t mind saying that when I was reading chapter 29, “The One Who Knocked”, late at night, if someone actually had knocked on my door, I probably would have screamed like a little girl.) As is the case with many books that were originally published as a serial, the story is episodic with a weak through story. Every couple of chapters is a new adventure as Sir Nayland Smith and Doctor Petrie try to foil another one of Fu-Manchu’s plots. This weakness is overcome by Rohmer filling the pages with exotic death traps, strange enemies, and near escapes for our heroes.

In 1912 Arthur Conan Doyle was still writing his Sherlock Holmes, stories and it is hard to read The Mystery of Dr. Fu-Manchu without thinking of Doyle’s detective. Like Holmes, Sir Nayland Smith is not part of Scotland Yard, but works with them. Both detectives are described as tall, thin, and serious men who are masters of disguise. The difference between them is that, unlike Holmes, Smith is not gifted with super human powers of deduction and observation. In fact Smith fails to stop Fu-Manchu about as often as he succeeds. Both detectives have a doctor as a sidekick, who also narrates their stories. Holmes often works with Inspector Lestrade of Scotland Yard, Smith works with Detective Inspector Weymouth of Scotland Yard. Holmes faces his nemesis, Professor Morriarty, the Napoleon of Crime, Smith goes up against Doctor Fu-Manchu, the Devil Doctor.

Sax Rohmer is smart enough not to over expose his villain. Fu-Manchu makes remarkably few personal appearances in a novel that bears his name. He is always at his most interesting and menacing when we don’t see him. All that is known about Fu-Manchu is that he is university educated, has a vast arsenal of deadly plants and animals, and possesses the most brilliant criminal mind our heroes have ever encountered. About his past, nothing is known. His plan is guessed at being Chinese world domination, but Sir Nayland Smith has no idea how or when this is to come about. The fact that Smith has been pursuing his nemesis as long as he has, and still knows so little about him, makes Fu-Manchu all the more appealing.

The Mystery of Dr. Fu-Manchu was published in 1912 a time when China was perceived as a mystery filled with exotic dangers. Chinese immigrants were viewed with suspicion because, not only did they look different, many of them also refused to let themselves be assimilated into Western culture. The Opium Wars and the Boxer Rebellion of 1898-99, that tried to expel all foreigners from China, gave rise to the concept of the “Yellow Peril”. To a Westerner, reading a Rohmer story in 1912, the Yellow Peril was personified in the mysterious, deadly, and yet fascinating, character of Dr. Fu-Manchu.

Fu-Manchu was very popular in his day, making appearances in films, television, radio and comic books. His last surge of popularity was a series of B-movies starring Christopher Lee in the 1960s. With today’s cultural sensitivity it is unlikely we will see a Fu-Manchu revival anytime soon. However, Titan Books has just re-released several of the Fu-Manchu novels. The Mystery of Dr. Fu-Manchu comes with a quick bio of Rohmer, historical context, and to whet your appetite for the next book, they also included the first chapter of The Return of Dr. Fu-Manchu. So, you never know, we may see more of The Devil Doctor yet. It is hard to keep a good villain down. 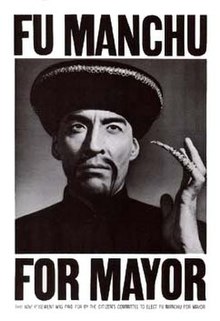 This entry was posted in Literature, Reviews, The Back Row's Weekly Serial Review. Bookmark the permalink.