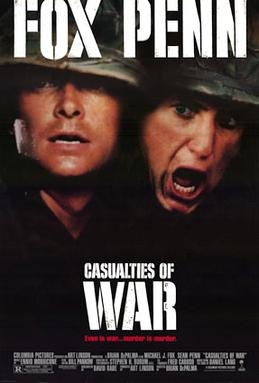 I ve already expressed my support for director Brian De Palma in my “Underrated Gems” columns for his films, such as Blow Out and Body Double. He has often been accused of being a Hitchcock wannabe and a copycat artist, but in the 1980s, he decided to broaden his horizons by breaking away from Hitchcockian-style thrillers. Of course, he directed Scarface and The Untouchables, which both turned out to be huge successes, and in 1989, he expanded his horizons even further when he made a serious Vietnam War drama called Casualties of War. The late eighties provided a lot of acclaimed Vietnam films, most notably Platoon and Full Metal Jacket, but Casualties of War wanted to examine the subject from a much different angle. The film is based on a true incident that took place during the Vietnam War in 1966 where five American soldiers kidnapped an innocent Vietnamese woman named Pham Thi Mao and decided to rape and murder her. One of the men chose not to participate in the crimes, and eventually provided the testimony which would send his fellow soldiers to prison. Renowned Tony Award-winning playwright David Rabe was hired to adapt this story into a film, but obviously, a Vietnam film which portrayed a unit of American soldiers as the villains was going to be a tough sell. While Casualties of War did draw its fair share of critical praise, it did not achieve the same mainstream success as Platoon or Full Metal Jacket. However, it’s still a very harrowing and effective war film and Brian De Palma makes the wise decision to avoid his typical directorial stylishness and just tell the story in a straightforward fashion.

Casualties of War is told from the point-of-view of a young private named Eriksson (Michael J. Fox), who has just arrived in Vietnam and is assigned to a unit led by the hardened Sgt. Meserve (Sean Penn). The film s opening scenes show Meserve going out of his way to save Eriksson’s life, but Eriksson will eventually learn that his sergeant has a much darker side. Meserve is a short-timer who is scheduled to return home in less than a month, but when his best friend in the unit is killed by the Viet Cong during a routine patrol in a village, something inside him seems to snap. When the unit is denied access to a village to see a prostitute, Meserve tells them that on their next reconnaissance patrol, they will kidnap a girl from another village and take her along with them to function as their sex slave. Erikkson doesn’t think that Meserve is serious until he goes through with abducting an innocent farm girl named Oanh (Thu Thuy Le), but Erikkson wants no part in raping her. The other soldiers in the unit are Clark (Don Harvey), a stone cold psychopath; the dim-witted Hatcher (John C. Reilly), who will pretty much do anything his sergeant tells him to do; and a newbie named Diaz (John Leguizamo), who initially tells Eriksson that he will not participate in the rape either, but is so intimidated by Meserve that he decides to go through with it. Eriksson decides to stand his ground and not rape the girl in spite of tremendous pressure from Meserve, who implies that if that Eriksson doesn’t show his loyalty to the unit, he might “accidentally” find himself getting killed in the middle of combat.

Eventually, the unit decides that Oanh is a liability and decide to shoot her. Eriksson attempts to report their crimes, but his commanding officers believe in the “what happens in the field stays in the field” mentality and decide to sweep the incident under the rug. If there s a drawback to Casualties of War, it’s that the structure of this story pretty much causes the film to peak with Oanh’s murder. While Eriksson’s attempts to bring the soldiers to justice are still compelling, the conclusion feels somewhat rushed and anticlimactic, and the film’s unnecessary final scene is incredibly stilted and corny. However, for the most part, Casualties of War is a very potent, well-made film. After building up such a successful career as a comedic actor, this (along with the film Bright Lights, Big City) was Michael J. Fox’s attempt to branch out and do serious drama. He proves himself to be up a very capable dramatic actor and while Eriksson’s overall sense of mortality does get a little heavy-handed at times, Fox does a very good job at providing the moral center in a very dark story. Of course, it’s Sean Penn’s frightening and riveting portrayal of Meserve that really brings the film to life. You can almost sense that this character might have been a decent person at one point in his life until the horrors of combat turned him into a monster. Even though it’s easy to see how someone could be intimidated by Meserve, it seems that he is really an insecure coward at heart since when the time comes to kill Oanh, he keep ordering his men to do the deed for him. Special mention should also be made of Thu Thuy Le’s harrowing portrayal of the victim. Casualties of War is the only credit on this actress’ filmography, but this is definitely one of the best performances ever delivered by someone who only acted in one film.

Don Harvey delivers a frightening turn as the psychotic Clark, and it’s scary to learn that the soldier his character is based on was released from prison after only eight years and went on to lead a white supremacist church! Casualties of War is also a great “Before They Were Stars” showcase for John C. Reilly and John Leguizamo, who both made their film debuts here and deliver strong performances. Ving Rhames (with hair!) also has an early small role as the unit’s lieutenant and delivers a terrific speech to Eriksson where he equates Oanh’s murder with his own personal experiences with racism and explains that sometimes you just have to let terrible things go. Former Marine captain Dale Dye, who is Hollywood’s foremost military adviser on war films, also has a riveting scene as Eriksson’s captain, where he chews the private out for wanting to rat on his fellow soldiers. And, of course, the legendary Ennio Morricone provides the film with a very memorable and affecting score. As I stated earlier, Brian De Palma makes the wise decision to tell this story in a very straightforward fashion and it’s easy to forget this film is from the same director who did such ultra-stylish Hitchcockian thrillers. In a way, the central themes of Casualties of War are even more relevant today than they were at time of its release. De Palma’s most recent film, Redacted, was inspired by the 2006 Mahmudiyah killings in Iraq, another incident where soldiers thought the dangers of combat gave them license to commit horrible atrocities. Casualties of War denounces this mentality, but also delivers the message that even good people are sometimes helpless from preventing a terrible atrocity. This is obviously not the most upbeat message to provide in a mainstream Hollywood film, which is probably why it wasn’t a huge hit. However, Casualties of War is still a powerful piece of cinema and of the more underrated war films ever made.