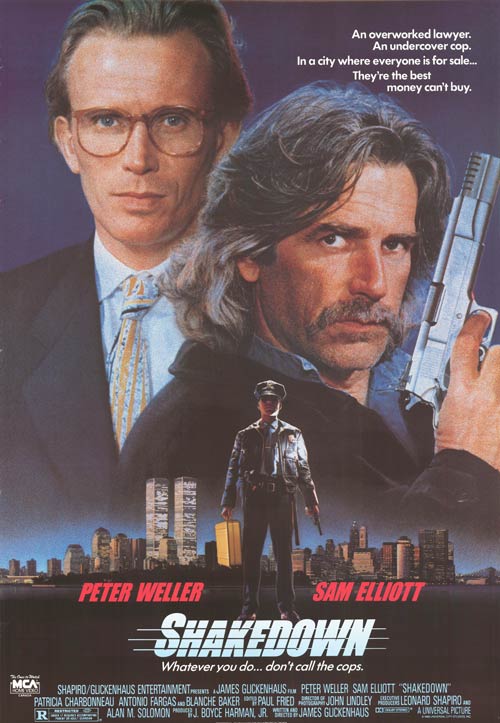 One of the more prominent schlocky action directors in the 1980s was James Glickenhaus. He first made his mark in 1980 with The Exterminator, a rather terrible Death Wish rip-off about a Vietnam vet going on an ultra-violent vigilante spree, but it garnered enough controversy to develop a cult following. Glickenhaus followed that up with a cheesy spy action-thriller called The Soldier and tried his hand at directing Jackie Chan in a film called The Protector. This was an early attempt to break Jackie Chan into the American film market, but the star and director were in constant conflict with each other and The Protector wound up being such a flop that Chan retreated back to Hong Kong for another decade. In 1991, Glickenhaus teamed up with Christopher Walken to make an action film called McBain. Coincidentally, this was around the exact same time that The Simpsons introduced the Rainier Wolfcastle version of McBain, leading to some legal issues between the two parties. Glickenhaus soon left the film business altogether and now works as an investment professional, running his father s finance firm, Glickenhaus & Co.. No one would ever accuse James Glickenhaus of being a great artist, but even his worst films still had their entertaining moments. The one film of his which came the closest to resembling a legitimately good movie was his 1988 effort, Shakedown. The film actually opened to some pretty decent reviews and even though the plot is a convoluted mess and there are moments of jaw-dropping stupidity, it also has moments of genuine wit, great stunt work, and is consistently entertaining from beginning to end.

Shakedown opens with a crack dealer named Michael Jones (Richard Brooks) getting arrested for shooting a plainclothes narcotics cop in Central Park. Jones claims that the cop pulled out his gun and was planning to rob and kill him, and that the shooting was strictly self-defense. He is assigned a public defender named Roland Dalton (Peter Weller), who is planning to leave the field of legal aid to go work for a Wall Street firm run by his fiancee’s wealthy father. Dalton is initially skeptical of his client’s story, but his investigation leads him to believe that Jones might be telling the truth and that the victim was a “blue jean cop” (which was the original title of this film before it was changed to the more generic Shakedown). “Blue jean cop” is a term used to describe police officers who love to make money by stealing from drug dealers and Dalton discovers that there are a plethora of corrupt cops in New York City who are on the payroll of a major crime kingpin named Nicky Carr (Antonio Fargas). Dalton soon realizes that defending his client could blow the lid off this whole operation and put his life in danger, but thankfully, one of his best friends is a cynical but honest narcotics cop named Richie Marks (Sam Elliott). Dalton and Marks start working together to expose this operation and wind up getting involved in a lot of crazy situations. To further complicate things, the prosecutor on Dalton’s case is Susan Cantrell (Patricia Charbonneau), a former lover of his. Oh, and a young John C. McGinley plays her assistant and pretty much just sits around in the background for half the movie.

Watching Shakedown, you almost feel like you re switching back and forth between two different movies. All the courtroom stuff feels like James Glickenhaus’ attempt to veer away from being a schlocky action director and make a legitimate movie. The whole storyline about defending an admitted drug dealer for shooting a corrupt cop would have been enough to carry a movie on its own, but Shakedown has enough plot and characters for several movies. The story arc about Dalton conducting an affair with the prosecuting attorney and deciding whether or not to leave his fiancée feels shoehorned in and is a distraction from the rest of the plot. And any illusion that Shakedown is going to be a semi-realistic police drama goes completely out the window whenever the character of Richie Marks is onscreen. You couldn’t find a sharper contrast between the courtroom scenes and the action sequences in this film, which are ludicrous and over-the-top… but very entertaining. In one sequence, Marks decides to bring Dalton along on a seemingly routine assignment and the two of them wind up stealing a motorcycle and chasing a bad guy through Times Square. In another scene, Marks gets into a fight with a punk on a roller coaster and rips out the car’s power supply, which causes the bad guy to go flying off the tracks. Late in the film, Dalton is involved a taxi chase, which leads to a completely gratuitous stunt where a crane snags the cab and lifts it up over a police barricade onto the steps of the courthouse. In between their ridiculous adventures, the two mismatched buddies take the time to discuss life and Marks delivers a hilarious monologue about the time he lost the love of his life because he accidentally killed her dog!

I tell you, I don’t think any actor could have made that monologue funnier than Sam Elliott, who is definitely the highlight of the film. Even though the character of Richie Marks looks like he wandered in from another movie, Elliott is hilarious in the role and has great chemistry with Peter Weller. If Shakedown had any credibility, it’s all thrown completely out the window during the film’s jaw-dropping finale. The viewer is treated to the sight of Marks leaping from a speeding Porsche onto the landing gear of the villain’s jet as it’s taking off, shooting the plane’s engine, throwing a grenade into the wheel well, and then jumping into the river before the jet lands and explodes! This is one of the hilariously bad action sequences you will ever see, as the blue-screen effects are atrocious and there’s virtually no continuity whatsoever (anyone with even a basic knowledge of New York City geography is going to laugh at the major jump cuts). Yet in spite of all this absurdity (or likely because of it), Shakedown still works and is a lot of fun to watch. The big problem with many of James Glickenhaus’ other efforts is that he seemed to take himself too seriously, but even though Shakedown is a very uneven mix of courtroom drama and brainless action flick, the tone is consistently tongue-in-cheek. The characters are colourful and entertaining and the actors are clearly having fun with their performances. Watching Shakedown, it’s hard not to feel nostalgic for a time when directors like James Glickenhaus could get cheesy action movies like this released into theatres. Sadly, Shakedown would probably get relegated to direct-to-DVD status today, but it’s an enjoyable reminder of the action cinema of yesteryear. Where else are you going to find an action flick featuring a montage where Robocop makes breakfast to the tune of Jimi Hendrix?