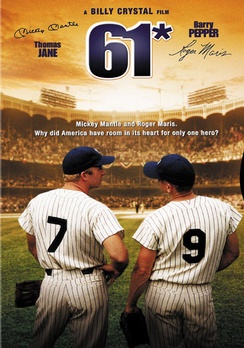 As this year s Major League Baseball playoffs begin, I am harkening back to 14 years ago when baseball’s historic “Race for the Record” took place. As I’m sure you may remember, the summer of 1998 was dominated by Mark McGwire and Sammy Sosa, who were both competing to break Roger Maris’ record of 61 home runs in a single season, which had stood for 37 years. Their chase did not just take the sports world, but the entire world by storm, and people I know who otherwise had no interest in baseball found themselves caught up in it. Of course, McGwire wound up breaking Maris’ record on September 8, 1998 and finished the season with 70 home runs. In 2001, Billy Crystal directed a film for HBO called 61*, which chronicled the season where Maris hit his 61 home runs. He would use McGwire’s record-breaking home run as the story’s framing device… an event that became almost completely obsolete a few months after the film’s release when Barry Bonds broke the home run record AGAIN by hitting 73 that season. Of course, over the past decade, the single-season home run record has become incredibly tainted over accusations about the use of steroids and performance-enhancing drugs. As a result, many baseball purists no longer consider the home run totals of McGwire, Sosa and Bonds to be legitimate, and think that Roger Maris’ original record should be restored. In a way, all these controversies have made only made 61* an even more interesting film to watch over a decade later. But even if you know nothing about baseball or the home run record, 61* is still a terrific standalone film and one of the most underrated sports movies ever made.

The movie opens with Roger Maris’ widow and children showing up to watch Mark McGwire potentially break the single-season home run record before the story flashes back to 1961. Roger Maris (Barry Pepper) has been with the New York Yankees for one season and has just come off of winning the Most Valuable Player award. In spite of this, Roger is nowhere as popular as his teammate Mickey Mantle (Thomas Jane), who has been the Yankees’ biggest superstar for a decade. The two men couldn’t have more differing personalities. Roger is a very quiet, introverted family man while Mickey is a lot more charismatic and outgoing and lives a wild lifestyle of heavy drinking and partying. In spite of this, the two men like and respect each other a great deal and Roger winds up taking Mickey in as a roommate in order to help him rein in his hard-living lifestyle. As the season goes on, Roger and Mickey both start pounding home runs out of the ballpark and everyone starts to wonder if one of them is going to break Babe Ruth’s much-vaunted 34-year old record of 60 home runs in a single season. If you’re wondering why 61* has an asterisk in its title, that’s because Commissioner Ford Frick was a baseball purist and was troubled by the fact that the schedule in 1961 had 8 more games than in 1927. As a result, he demanded an asterisk be attached to the home run record if it was not broken within the season’s first 154 games. (The asterisk would finally be removed from the record books thirty years later.) This is just one of the many difficult obstacles that Roger Maris has to face during his pursuit of the record. It’s obvious that everyone wants Mickey Mantle to be the one to break it. And given that the only Yankee more popular than Mickey is Babe Ruth, many people consider the idea of Roger breaking the Babe’s record to be sacrilege and treat his success with hostility.

Like I stated earlier, the controversy that now surrounds the home run record makes 61* even more fascinating to watch ten years later. Much like Roger Maris, many people were actively rooting against Barry Bonds while he was pursuing the single season home run record (and, eventually, the record for most home runs of all time). In Bonds’ case, it had a lot to do with the controversy involving performance-enhancing drugs and because… well, he was a major dick! In Maris’ case, people seemingly rooted against him because he was just not a larger-than-life figure. He was a simple, down-to-earth man who was nowhere as charismatic or iconic as the likes of Babe Ruth or Mickey Mantle. He was never particularly comfortable talking with the press, and as a result, they often wrote harsh things about him. His introverted persona would not win him very many fans either. Yet, as 61* shows us, Roger Maris was still a very good man who cared more about winning that breaking any record, and did not deserve the unbearable pressure and hostility he received. 61* also does not hesitate to show us that Mickey Mantle was not the perfect, angelic human being that the fans and media thought he was. Yet, in spite of his flaws and questionable lifestyle choices, Mickey was still a very good person at heart, and his friendship with Roger provides the heart of 61*. Even though they are competing for the same record and the public seems to think they are bitter rivals, they provide great support for each other most of the time. When Mickey has to withdraw from the home run race near the end of the season because of an injury, no one is rooting harder for Roger to break the record than him. You couldn’t find a more perfect casting choice to play Roger Maris than Barry Pepper, and Billy Crystal even said he was struck by Pepper’s uncanny resemblance to the real Maris. Thomas Jane is equally as convincing as Mickey Mantle, and both actors turn in terrific performances.

61* was obviously a labour of love for Billy Crystal, who is one of the biggest New York Yankee fans there is and had fond childhood memories of following the home run race between Maris and Mantle. The film’s production values are first-rate, featuring some very authentic and convincing period detail, and Crystal does a bang-up job at recreating the flavour of Major League Baseball in the summer of 1961. In addition to the stellar work of Pepper and Jane, Crystal has filled the supporting roles with a terrific cast of character actors, such as Bruce McGill, Donald Moffat, Christopher McDonald and Richard Masur, and they all do first-rate jobs. The story is so well told that 61* should make for compelling viewing even for those who aren’t baseball fans. Those who don’t follow sports might think that breaking a record is a joyous occasion for an athlete, but 61* perfectly conveys the amount of stress and pressure they have to face in order to make it to that point. When Roger finally does break the record on the last day of the season, it winds up packing quite a punch and you can sense Roger’s immense relief. To this day, many feel that Roger Maris has still not truly gotten the respect he deserves as he has never been elected to the Baseball Hall of Fame. It’s true that Maris was never an all-around great player like Mickey Mantle and that his great achievements were mostly just confined to a couple of seasons. But given how much performance-enhancing drugs have influenced today’s home run records, Maris’ ability to hit 61 home runs in one season looks even more impressive 50 years later. Maris and Mantle’s achievements that season were done through pure skill and hard work and the movie will leave you with a better appreciation of this talents. Since 61* was a made-for-cable film, it probably has a bit of a stigma attached to it. Like Roger Maris, 61* has never really gotten the full respect it deserves, but I’d rank it right up there amongst the greatest sports movies of all time.