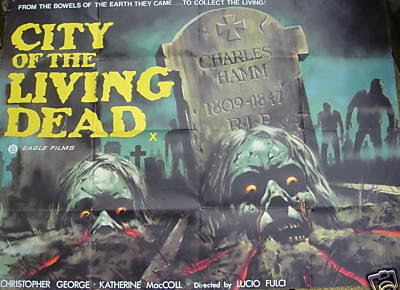 As Halloween grows closer, it s about time that “Robin’s Underrated Gems” finally put the spotlight on a film from the director who is known as the “Italian Godfather of Gore”: Lucio Fulci. Unlike many horror filmmakers, Fulci did not start off his career in the genre. Throughout the 1960s, Fulci directed nearly 20 Italian comedies and also dabbled around in the thriller and spaghetti western genres. In 1972, he made a very controversial giallo film called Don’t Torture a Duckling, about a village that is plagued with a series of child murders by an insane Catholic priest. The movie garnered a lot of notoriety because of its brutal violence and gore, which would eventually become Fulci’s biggest trademark as a director. Years later, he directed Zombie, the movie which would put him on the map amongst horror fans. The film was released in Europe as Zombi 2 and marketed as a sequel to George Romero’s Dawn of the Dead and while that was obviously a load of crap, Zombie was still a big success. It was hardly an original, groundbreaking piece of work, but Fulci did make his mark by delivering a lot of ultra-gory moments and memorable scenes which sometimes bordered on the surreal, such as when a zombie got into a fight with a shark! No one ever really considered Lucio Fulci to be a great artist, but his films certainly delivered the goods for horror fans and gorehounds. In the early eighties, he directed three films which he considered to be his unofficial “Gates of Hell” trilogy: City of the Living Dead, The Beyond, and The House by the Cemetery. All three of these films dealt with the idea of the undead being released through the gates of Hell and trying to take over the world. While City of the Living Dead is probably the most ridiculous entry in this trilogy, it is still the most entertaining.

City of the Living Dead (which was originally released under the title, The Gates of Hell, in North America) opens with a Catholic priest hanging himself in a cemetery in the rural town of Dunwich, New England. Dunwich is apparently a very cursed place and is notorious for having been built over the original site of Salem, Massachusetts, home of the infamous Salem witch trials. For whatever reason, this priest’s suicide has opened the gates of Hell and zombies are now running rampant through the town and killing its residents. It’s soon revealed that this portal to Hell must be closed before All Saints’ Day takes place, or the spirits of the dead will take over the world. While participating in a séance, a New York-based psychic named Mary Woodhouse (Catriona MacColl) has a vision of these events and is so terrified that she winds up dying of fright. However, while being buried in her coffin, Mary suddenly comes back to life and starts screaming. Luckily for her, an investigative reporter named Peter Bell (Christopher George) just happens to be checking out her grave in the cemetery at the same time. After hearing her screams, Bell decides to break her out of the casket… and nearly slams a pick axe down into her face!

This scene is a perfect representation of City of the Living Dead as it manages to be suspenseful, entertaining and unintentionally hilarious all at the same time. Anyway, after Mary shares her terrifying vision with Bell, the two of them travel to Dunwich to figure out how to close the portal to Hell before it’s too late. Of course, they find out there’s been a recent slew of murders in the town. They befriend the town’s local psychiatrist, Gerry (Carlo de Mejo), who inexplicably seems to have more authority than the police. Gerry is convinced that the dead are coming back to life, but the cops and everyone else believe that the village idiot, Bob (Giovanni Lombardo Radice), is responsible for the killings. In another scene that fits perfectly into the “ludicrous-yet-awesome” category, a local resident catches Bob interacting with his teenage daughter in his garage and freaks out. Does he call the cops? No, he makes a much more rational and level-headed decision: he decides to drill a friggin’ hole through Bob’s skull!

What else can I really say? If you’re looking for logic and common sense, you’re probably better off not watching City of the Living Dead… or any Lucio Fulci film, for that matter. To say that the story here is murky would be an understatement. There’s very little explanation for why the priest’s suicide opened the gates of Hell, why Mary just happened to have a psychic vision about the whole thing, or why she died and just happened to come back to life a few days later. The climax of the film seems to suggest that you can defeat the Devil simply by stabbing him in the crotch, and the ending is sure to leave you screaming “WTF?!”. Rumour has it that the editor accidentally destroyed a couple of the movie’s final frames and that Fulci didn’t have the money to reshoot it, which is why the ending doesn’t make much sense. However, even with all these flaws, I consider City of the Living Dead to be the perfect example of a “Passing the Cactus” movie. I have no problem looking past all the film’s problems and recommending it because it is tremendously entertaining and delivers the goods for its audience. Lucio Fulci films usually contain at least one very memorable gore scene, and City of the Living Dead has more than its fair share of them. As silly as that “drill through the head” sequence may be, it’s actually quite convincing and watching it, you’re left wondering how the hell they pulled off the effect without actually drilling through the actor’s skull. However, the most memorable gore scene in City of the Living Dead has to be when a zombie causes a girl to start vomiting out her entire insides. How exactly does the zombie cause her do this? Don’t ask, and just enjoy the entrails!

Incidentally, that’s future horror director Michele Soavi (maker of such classics as Stage Fright and Cemetery Man) playing the girl’s boyfriend. Anyway, while Fulci is best known for his gore and violence, he is also very skilled at generating suspense and creating atmosphere. As absurd as the story may be, City of the Living Dead does maintain a genuinely spooky atmosphere from beginning to end. Like I said earlier, Fulci does have a unique ability to present scenes which frighten the viewer while also making them laugh and cringe at the same time. The film has plenty of memorable visuals, featuring some great cinematography from Sergio Salvati, and the atmosphere is greatly enhanced by a memorably spooky musical score from Fabio Frizzi. Some people almost consider City of the Living Dead to be Fulci’s dry run for The Beyond, one of his most renowned films. From a technical standpoint, The Beyond is definitely a more well-made film, but when it comes to pure entertainment value, I’d still give the nod to City of the Living Dead. It’s not a work of great art, but it’s one of the most enjoyable works from a horror filmmaker who knew exactly how to give its audience what it wants.