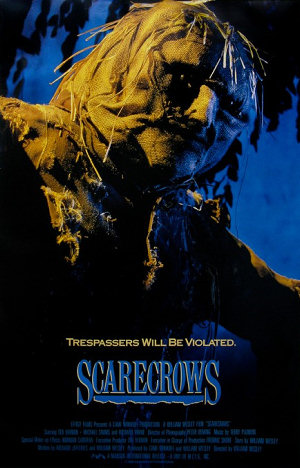 Horror fans will probably recognize this premise: a small group of people seek shelter in an abandoned farmhouse in order to protect themselves from a zombie attack. However, the major difference in this particular case is that you can replace the word “zombie” with the word “scarecrow”. Of course, this happens to be the premise for a 1988 horror flick named Scarecrows, which was made on a miniscule budget by an almost completely unknown cast and crew. Upon first glance, this film doesn t sound like anything more than a laughable Grade-Z ripoff of Night of the Living Dead, but believe it or not, the final product is surprisingly effective. Scarecrows is not a horror film that you would ordinarily go into with high expectations. Watching it, you’re fully aware the filmmakers are working with a lot of limitations and that the production is amateurish at times, but you find yourself strangely immersed in the movie’s genuinely creepy atmosphere. Scarecrows is not particularly well-known and not many of the people involved in it went on to have memorable careers. However, it was clearly made by filmmakers who understood the genre and knew what they were doing, and many horror fans who wind up seeing it usually come away pleasantly surprised. There doesn’t seem to be a North American trailer for Scarecrows available on the Net anywhere, but this German trailer is well worth watching, particularly for the narrator’s pronunciation of “Scare-krauss!”.

As Scarecrows opens, we learn that a group of five paramilitary mercenaries – Corbin (Ted Vernon), Curry (Michael Simms), Jack (Richard Vidan), Roxanne (Kristina Sanborn) and Bert (B.J. Turner) – have ripped off over $3 million from Camp Pendleton and killed a couple of MPs in the process. To escape, they have taken a civilian pilot named Al (David Campbell) and his teenage daughter, Kellie (Victoria Christian) hostage in order to fly them out of the country. All of a sudden, Bert decides to double-cross his fellow thieves by parachuting out of the plane with the money and leaving a hand grenade behind. The other thieves manage to throw the grenade out of the plane in time and decide to land the plane to go after Bert and retrieve their money. Bert has parachuted into a desolate cornfield in the middle of nowhere and the only nearby shelter seems to be an abandoned farmhouse. After unsuccessfully attempting to escape in a truck that breaks down, Bert hides in the scarecrow-filled cornfields while his former partners come after him. However, he is soon shocked to find himself encountering a much more dangerous threat when one of the scarecrows suddenly comes to life and stabs him! The next time Bert’s companions see him, he appears to be a mindless zombie, but once they discover that his body has been stuffed with some of the stolen money, it’s apparent that he has been turned into a living scarecrow!

The plot of Scarecrows is about simplistic as you can get. The first twenty minutes make the film look like a heist thriller, but things immediately change once you once the scarecrow comes to life. Scarecrows provides almost no explanation for the events in the film, but that’s probably a good thing. The film implies that a trio of brothers who used to inhabit the farmhouse may have been Satan worshippers and being forced to live as murderous scarecrows could be their eternal punishment. Indeed, there’s also an interesting scene where one of the thieves brings up the possibility that they were actually killed during the heist and are now being punished for their sins in Hell. I suppose this would be an appropriate transition to address what is the most common complaint levied against this film: the characters are not likable and it’s impossible to care about what happens to them. It’s true that this might have been a more effective horror film if it had starred, say, a bunch of fun-loving teenagers instead of a group of obnoxious, morally bankrupt thieves. However, horror is the one genre where skilled filmmaking can easily overcome problems with characterization. For instance, most of the characters in John Carpenter’s The Thing are not particularly likable or sympathetic, but the whole movie is masterfully crafted that you’re still enthralled and care about what happens. Even if you don’t care about the fate of most of the characters in Scarecrows, the film still manages to generate a surprising amount of tension. Besides, if you don’t want these characters to survive, you can still garner some enjoyment out of watching them suffer some pretty gruesome and harrowing deaths.

The director of Scarecrows is William Wesley, whose only other credits include two television episodes and a 2001 straight-to-video flick called Route 666. The only person from this film who seemed to have any sort of notable career is cinematographer Peter Deming, who would serve as director of photography for such films as Evil Dead II, Mulholland Drive, Drag Me to Hell, The Cabin in the Woods and the Scream sequels. Deming obviously knows how to shoot a horror film and is one of the main reasons Scarecrows is way better than you’d expect. The entire movie takes place at night, which not only creates a consistently spooky atmosphere, but also helps cover up a lot of the budgetary limitations. If the scarecrows in this film had been shot in broad daylight, they might have been laughable, but keeping them shrouded in constant darkness gives them a very creepy aura. Most of the time, the scarecrows are simply shown lying motionless on their posts, but the viewer is left in a constant state of unease about when they are going to spring to life. The film makes good use of its limited settings and Deming often shoots the action from very interesting angles in order to increase the tension. Scarecrows was obviously made people by people who love horror films and their enthusiasm often makes up for the film’s flaws. While much of the acting is amateurish, the cast does a very commendable job at playing this potentially absurd material with complete seriousness and genuine conviction. Scarecrows is not a horror classic, but it is a very stylish piece of filmmaking and will appeal to fans of the genre. Much like clowns, certain people have a natural phobia of scarecrows and if you are one of those people, you may find Scarecrows to be the scariest film ever made.