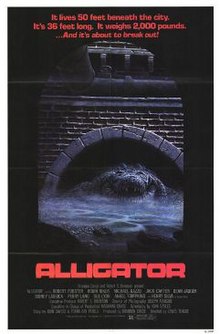 You’ve probably heard the urban legend about how if you flush a baby alligator down the toilet, they will live in the sewers for many years while they grow to an enormous size and feed on any unsuspecting victims that cross their paths.  This legend is believed to have originated all the way back in the 1930s, so it’s actually somewhat surprising that no one attempted to make a horror movie about this premise until 1980 when Alligator was unleashed upon the world. We just did a Shouts From the Back Row podcast about our favourite killer animal movies and Alligator made my “honourable mentions” list. I don’t think it’s much of a stretch to say that this is probably as good as a movie about a giant killer alligator could possibly be. A lot of this film’s success can be attributed to screenwriter John Sayles, who is known for having directed character-driven indie dramas such as Lone Star, Eight Men Out, Passion Fish and Limbo, and is not someone you’d picture writing a B-movie like this. However, it’s BECAUSE Sayles started out writing B-movies like this that he was able to launch such a successful career as an independent filmmaker. Sayles originally broke into the business when he wrote the Joe Dante/Roger Corman collaboration, Piranha, which may have been a Jaws rip-off at heart, but was so witty and entertaining that it became one of the most beloved B-movies of the 1970s. In addition to Alligator, Sayles also wrote the screenplay for the renowned werewolf film, The Howling, and attained credibility because his scripts were way better-than-average for the genre. In fact, he even used the money he made from this film to finance his first indie drama, The Return of the Secaucus 7. Alligator is a very cheesy movie, to be sure, but it’s also very self-aware and manages to find the right balance between being tongue-in-cheek while still providing some legitimate scares.

The infamous urban legend is established right from the film’s outset when a little girl buys a baby alligator named Ramon while on vacation with her family in Florida. After they travel back home to Chicago, the father gets sick of Ramon and decides to flush him down the toilet. Flash-forward twelve years later, and mysterious happenings start taking place down in the Chicago sewers. A city sewer worker has gone missing and his severed leg has been found floating in the sludge.  For some odd reason, the remains of a bunch of dead missing pets have also been found in the same area, so a cop named David Madison (Robert Forster) is assigned to investigate this. David and a young rookie cop go down into the sewers to check things out when David witnesses a 36-foot-long, 2000-pound alligator drag his partner away. Of course, this alligator turns out to be a grown-up Ramon. The reason for his immense size is because a major pharmaceutical company run by a corrupt tycoon named Slade (Dean Jagger) has been kidnapping pets and experimenting on them with a growth formula before disposing of their corpses in the sewer. Feeding on these infected pets has caused Ramon to mutate into the giant creature he is now. No one else to believe David’s story about this oversized alligator, except for a scientist named Marisa Kendall (Robin Riker)… who also happens to be the same girl who bought Ramon in the first place. The two of them begin a romantic relationship while Ramon emerges from the sewers and starts running wild through Chicago to feed on innocent victims. It’s no secret that horror films are usually hesitant to kill off children… but that’s not the case with Alligator, where a cruel prank turns a young boy into gator food!

Now, obviously, the special effects in Alligator are not exactly first-rate, but that’s part of their charm, and these effects are certainly more fun than seeing Ramon as a CGI creation. Like many filmmakers, director Lewis Teague started out by working on the films of B-movie icon Roger Corman, so he would definitely know how to put together an entertaining monster movie with a limited budget and resources. Teague follows the “Jaws rule” of keeping the monster off-screen for the first half of the film. In fact, Teague almost had no choice in the matter since, like the mechanical shark in Jaws, the animatronic alligator kept malfunctioning during shooting. Ramon is a much more menacing threat during the scenes where he’s hidden in the shadows of the dark, claustrophobic sewers rather than when he’s out in the open. Giving Ramon limited screen time also helps you ignore the sheer absurdity of the premise: how does this 36-foot-long creature manage to travel to so many different places in the city of Chicago without anyone noticing him? Thankfully, since the film clearly doesn’t take itself very seriously, it’s very easy to forgive its plot problems. The inherent problem with low-budget monster movies is that they sometimes tend to drag during the scenes where the monster isn’t onscreen. Thankfully, this film has a talented writer like John Sayles on hand to keep the non-horror scenes entertaining. Even though Sayles has never actually directed a horror film, he’s clearly a fan of the genre and knew how to push the right buttons with Alligator. The heroes are likable enough that you root for them, and the villains are such douchebags that you want them receive a horrible gator-related comeuppance… which this film definitely delivers.

None of the characters in Alligator are pillars of great depth, but Sayles at least ensures that they’re entertaining. Robert Forster makes a very likable hero as David Madison and even though the movie probably spends a bit too much time on a subplot about David’s guilt over his partner’s death, he’s still a more interesting protagonist than you’d normally find in this type of genre film. Like I stated earlier, the antagonists in this film are wonderfully hateful and provide effective gator bait, particularly Academy Award winner Dean Jagger (in his final screen role) as the corrupt CEO of the pharmaceutical company, and Sydney Lassick as a shifty pet store owner who kidnaps the animals for them.  Henry Silva almost completely steals the film in a small role as Colonel Brock, an arrogant big-game hunter who is brought in to stop Ramon, but pretty much turns out to be completely useless. The story has a lot of fun with some satirical elements, such as when the media frenzy about Ramon prompts peddlers to start telling alligator-related memorabilia all over the city. The script also contains some great inside jokes, particularly how Ramon’s first human victim is a sewer worker named Edward Norton (in case you’re wondering, this is a homage to the character on The Honeymooners, not the famous actor). And sharp-eyed viewers will also have fun reading the graffiti on the sewer wall during the climax, which reads “HARRY LIME LIVES”, a clever reference to the iconic screen villain who was chased through the sewer system at the end of The Third Man. Sadly, Alligator is the type of film that goes straight-to-video these days and never gets released into theatres, but it’s still a fun and entertaining piece of genre filmmaking that knows how to entertain its audience. If I have one complaint, it’s that the movie misses a major opportunity when Ramon is killed off at the end. How could they NOT have had Robert Forster utter the one-liner: “See you later… alligator”?!